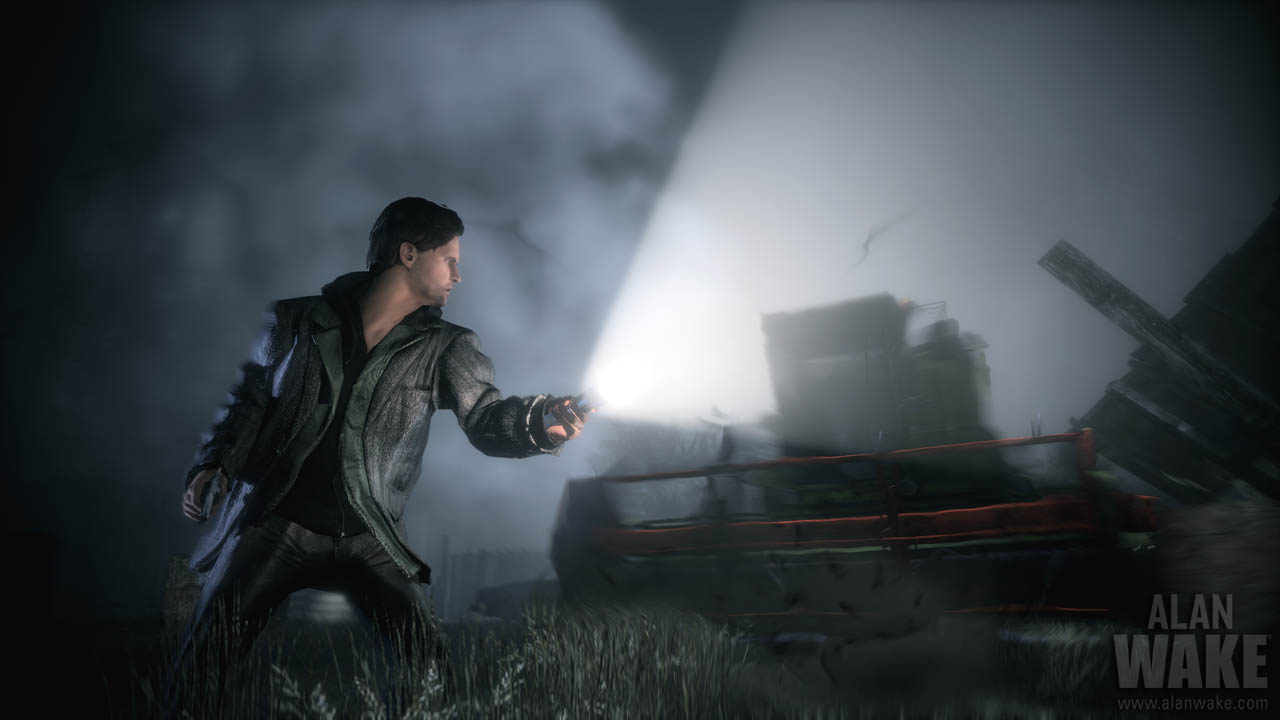 Alone, in the dark.

Famous thriller writer Alan Wake and his wife Alice are on vacation, leaving the urban clamour of New York City for the picturesque mountain town of Bright Falls. They hire a cabin, collecting the keys from an extremely sinister old woman dressed in black. Alice has a surprise for Alan, but before he has a chance to undo his belt and suck in his stomach she unveils a typewriter. She’s consulted a therapist about Alan’s ongoing writers block and thought the change of scenery would stimulate him.

What would you do? Embrace your loved one? Tell her she’s the most wonderful person in the world? No. You fly into a rage, swear at your wife and storm out of the cabin and into the darkness she’s terrified of- because you’re Alan Wake, and you’re an asshole.

Alan isn’t an antihero: he’s a dick. When his wife is swallowed up by a primordial darkness, he lashes out at the townspeople and his friends. He breaks out of a police station even though the sheriff is perfectly nice to him. He gets drugged and spends the day dozing in a trailer park, then he runs away from the police and FBI. At the risk of spoiling the plot further, these are only some of Wake’s many acts of pure dickulence. He is convincingly unbelievable: his sarcastic one-liners are nothing you haven’t heard before, but his behaviour is so stupid it could only occur in a video game or an episode of Heroes. Alan’s agent Barry is one of the finest game characters in recent memory: he’s funny, kind-hearted and genuinely worth saving from danger (even if Alan isn’t). Other bit-players like the town sheriff, sinister psychotherapist and town-nut-who-actually-proves-to-be-the-sanest-of-them-all-who-would-have-thought are well-worn stereotypes.

Like a great novel, Alan Wake’s story sucks you in. Like any horror novel, it’s stuffed full of clichés and events so predictable you’ll swear you have precognition. Poor Alan loses his wife and around two weeks of his life, and the all-but-zombified townspeople aren’t much help. This is probably because they’re being possessed by a dark presence that makes them go berserk and try to murder him. He starts finding pages of an unfinished manuscript that he can’t remember writing, which eerily foreshadows the events to come. It’s quite a clever way to add depth to the plot without having a lot of tedious cutscenes, which the game is generally very good at avoiding. It also means that if you’re not bothered with the story you can plough ahead (and that would be a very, very stupid thing to do), killing the monsters and missing the point. For this is a game that’s about immersing yourself in the environment much more than just blowing it up. Most of your time is spent exploring the dense forests and haunted settlements of the ironically-named Bright Falls. The town is arguably the game’s strongest character, rich in stunning scenery and shanty towns. By day, light imbues it with a comforting glow: you don’t realise at first but Remedy are deliberately making you feel at ease in the environment, only to pull the rug out from you later. By night, the town is drenched in shadow and foreboding. Wake’s journey takes him deep into the heart of the forest where every inch looks the same, save for a thin gravel track weaving through the darkness. A dark fog begins to envelop the forest until you can hardly see the way ahead… that’s when the former townspeople come for you.

Remedy’s last game was the cinematic action title Max Payne, and it shows. The combat is cinematic, brief and intense- long waits of wearing down the enemies with your flashlight, punctuated with bursts of gunfire. The camera pans to follow your flare gun round as it explodes in the face of the nearest woodsman. Foes rely on melee attacks rather than firearms of their own, but they come at you so quickly you’ll barely have time to squeeze a few rounds off before they’re in your face swinging something sharp and bloody. It’s generally a short-lived affair but each encounter feels like it could be your last. While the gun fights are undoubtedly exhilarating, they only really work in the overall context of the game’s atmosphere. A pure distillation of combat mechanics extended over a twelve hour game would be a rough drink to swallow: that’s why you get it served up in shots with a nice soft drink of exploration after to steady your nerves.

However, Alan is most definitely not Max Payne- he’s a bit cack-handed with a weapon and can’t sprint for long before gasping for breath. When all else fails you can keep enemies at bay by lighting a flare and blinding them, while enjoying the billowing smoke effects. Alan can perform a well-timed dodge and leap out of their way while the camera goes all Matrix on you. Oh, and the baddies melt when light touches them. Just a minor point.

Alan Wake is about light and dark. Light provides your sole means of defeating the crazed huntsmen and loggers. It marks “safe havens” which recharge your health and give you a brief respite from enemies. It illuminates secret passages holding a much-needed cache of ammunition and flares. It cuts through the fog and foliage like a light-sabre through a bag of candy floss. It’s no accident that Alan’s aiming reticule is replaced with the beam from your flashlight. Dark is not just where the enemies crawl from and what envelopes them: it’s the tension as your torch battery runs out while an axe-wielding maniac lunges at you, a mass of smoke that morphs into evil birds that dive-bomb at you. If you weren’t afraid of the dark before playing Alan Wake, it might well change your mind. Although it’s pitched as a horror game, Alan Wake never quite lives up to the marketing. I did jump out of my seat once- a lone axeman caught me off guard as I left a nondescript house and I felt a bit ashamed of myself- but you’ll be more tense than traumatised most of the time. Since too many ‘scary’ titles rely on cheap, jack-in-the-box scares, this is probably for the best: the atmosphere remains thoroughly creepy throughout. There are other criticisms to be made- the vehicle sections are like steering a shopping trolley through sand dunes, there’s not a great deal of replay value to be had- but they’re minor niggles in an otherwise outstanding experience.

While Alan Wake is a game full of memorable locations, it’s not big on memorable set-pieces (except for a notable showdown at a rock concert). It’s best experienced as a whole: helpfully, the developers have broken it down into ‘episode’-sized chunks to make it feel like a TV series. Once you get past the initial absurdity of a series with only six episodes in it, it’s a clever mechanic to keep the player engaged through multiple sittings. That said, I had absolutely no intention of playing through multiple sittings. I originally meant to pace myself while playing it but ended up tearing through the game, hungry for the next plot twist or battle.

Alan Wake sets a new standard for cinematic action. You’ll be hooked from beginning to end and when it’s over you’ll wish you could erase your memory, go back and play it all again- perhaps with an unfinished manuscript of how to get through the tricky bits. Sometimes, what makes a good experience great is because you can only have it once. Relish it.

It’s disappointing that The Signal doesn’t live up to the standards set by the original game, but it’s only to be expected. As I very carefully tiptoe around the minefield of plot spoilers, Alan Wake ends on a cliffhanger of sorts but one that deserves- or perhaps demands- a full sequel to explore.

The Signal represents the best and the worst of what downloadable content can offer. On one hand it’s a neat continuation of the game that ramps up the challenge, has some interesting new additions and whets your appetite for future instalments. On the other hand, it’s very much the reheated leftovers to the game’s three course feast: you’ll go through recycled locations, fight the same enemies, and the reason you’ll wait for future instalments is because there’s another, inferior cliffhanger waiting for you at the end.

So it’s more of the same then, which is the very last thing a game like this needs. Even if The Signal is a throwaway expansion, it’s available at no cost if you purchased Alan Wake new and so it’s worth downloading for that reason alone.