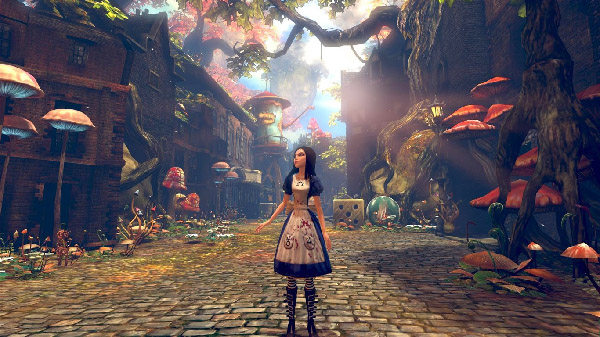 “Begin at the beginning,” the King said, very gravely, “and go on till you come to the end: then stop”.

My formal introduction came during his interview on an episode of GFW Radio. I was charmed. He discusses his id software past, Shanghai-based Spicy Horse present and the then future work of episodic Grimm, a game by his own admission that puts Art and Story before Gameplay.

I went in to Alice: Madness Returns wanting to like it. And indeed there is much to like and a handful of moments to love.

The opening section is more Wizard of Oz than Alice in Wonderland. We open with Alice – poor demented girl – in Rutledge Asylum presumably incarcerated for her fantastical tales of tea parties gone awry. London is grey with soot and filth milling about town running their errands. Bulbous faces and contorted bodies, these Victorian peasants have more character than some of the story’s major players.

And then, just like Dorothy, Alice is stolen from the monochrome city and catapulted into a Technicolor Wonderland.

The richness of this first Wonderland encounter comes from bold, bright colours and bold, bright ideas: Giant marbles are in fact imprisoned slugs trapped in spheres; blossomed lilies gesture you inward before gobbling you up; Giant stone sculptures to Alice tower over with weeping waterfalls that turn crimson and gore as the damage to Wonderland, and American McGee’s signature style, is revealed.

Another moment of colour and wonder comes from the Card Castles in the Sky level. Platforms and pathways constructed from giant playing cards flying in and out of sequence in the clouds. A simple concept, set to a light, blippy soundscape, creates a sense of sky platforming that taps into memories of the red flying hat from Super Mario 64.

Sadly these moments are too brief and are lost in levels that are too long. By the time I made it to end of a chapter I was more relieved than anything else. This is particularly disappointing considering the refreshing speed with which the play mechanics are introduced in the first sections.

Now I could have regulated my own play a little better- no-one forced me to play to the end of a level. But similarly there is no guidance afforded other than “keep moving forward until you bounce out of a level and into a cutscene”. The dynamic, even when punctuated by brief flirtations with innovation, is relatively flat.

Now bouncing into a cutscene is an incentive when the story is good. For all its strong art direction Madness Returns tells a very weak story in a very drawn out fashion.

Alice is sort of rescuing Wonderland which I think is mentally linked to her well-being and every now and then we visit the death of her family in a burning house which probably reflects the burning cathedral train thing that makes the odd appearance but these audio diaries don’t seem relevant to any of that and– wait why am I staging a play underwater again?

Madness Returns‘ order is definitely Art, Gameplay and then, a long way behind, Story.

At its core there is a simple yet surprisingly engaging combat system. Basic moves and a variety of basic enemies don’t sound appealing but Spicy Horse does well to mix the combinations and conditions to keep combat entertaining. It’s undoubtedly better than Lollipop Chainsaw but it’s similarly straightforward fare. But again the combat suffers from sheer repetition required to fill those long, long levels.

Buried in a chamber and hidden off to the side in the Queen of Hearts castle is a stone carving of Raz from Psychonauts. Alice: Madness Returns is no Psychonauts. It wasn’t trying to be anything on that scale. I’m hopeful for Spicy Horse’s future though. They have potential and are building up to bigger and better things. I respect that.