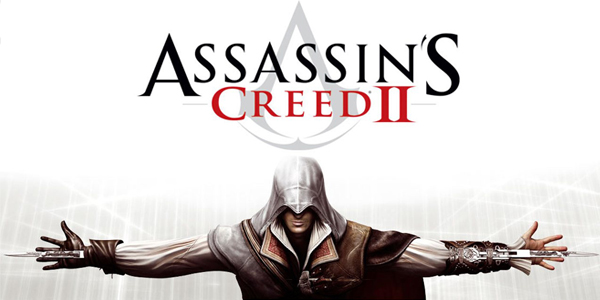 Reviewing sequels is difficult. You’ve already spent your entire creative force on the first game, so you have to take all those second-rate similes and failed jokes from the previous review and rework them into something interesting. There comes a point in the creative process when you evaluate your work, realise it’s actually pretty boring, then tear it up and start over with the fragments that were successful. Assassin’s Creed II is such a work.

Ezio Auditore di Firenze is the eponymous bringer of silent death. He’s here to assassinate everything bad about the first game- the repetition, the boring cast, the repetition, the dull environments within an inspiring setting, the tedious flag collecting, and the repetition. If you’ve read my thoughts on Assassin’s Creed, you’ll know there was a lot of bathwater to be thrown out to save the baby from drowning and luckily Ubisoft haven’t held back. Gone is the historically interesting, yet ultimately unfulfilling setting of the Third Crusade: the action moves to Renaissance Italy, an area with as much character as fictional masterpieces like Bioshock’s Rapture or BioWare’s finest creations. The winding back alleys of Florence and famous vistas of Venice are the perfect places for an assassin to hunt, or even do some casual sightseeing if the mood takes you.

Gone too is Altaïr, that brooding loner with the personality of an inflexible manikin, replaced by lothario and intrinsic do-gooder Ezio. Unlike Altaïr, Ezio actually has strong motives for all the assassinating: his family and brothers have been framed and murdered by the Borgia family, his mother left in a catatonic state, so he seeks revenge against the Borgia and their minions. Equally unlike Altaïr, he’s a charming and likeable character. You’d think that a compelling story would be fairly basic stuff to include early in a game’s design process, but Assassin’s Creed practically omitted it, so it’s all the better that ACII is packed with strong narration and excellent characterisation. Even wimpy animus substrate Desmond has matured into somewhat of a badass; he’s almost tolerable this time around. The real star of the show is Ezio, but his uncle Mario (yes, the game does include a “It’s-a me!” joke and yes, it is funny) and Leonardo da Vinci are equally memorable. They feel like real characters, not caricatures, eclipsing the cardboard stereotypes like Altaïr and bearded-therefore-evil Al-Mualim of its predecessor. The citizens of Italia feel worthy of your help and you might even feel a hint of remorse as you fling a beggar into some scaffolding. Maybe.

ACII blurs the line between fantasy and history. It is quite evidently fantasy, of course: I’m pretty sure Pope Alexander wasn’t assassinated so Ezio could steal his magic staff and seize his mind control device, but it’s nice to dream. There are enough factual nuggets scattered throughout the game that you feel like you’re learning something. Did doctors actually wear those ridiculous masks to ward off the plague? I hope so, or I’ll look like an idiot when I bring it up in casual conversation. Even as the game regresses into science fiction schlock that will have fans of a good plot retching in dismay, it still seems plausible. There’s just enough story to entice more dedicated players into solving the puzzles scattered throughout the environment and uncover a deeper mystery. This deeper mystery turns out to be yet more science fiction schlock, but at least they tried.

Even with all the sci-fi and religious hokum it’s ultimately a game about stabbing dudes in the neck, then running away and hiding like a coward. Here ACII excels with a subtly refined approach that invites new players, yet doesn’t patronise veterans. I approached it after ravenously devouring Assassin’s Creed and was pleasantly surprised by the lack of handholding, although newcomers won’t be intimidated by the intelligent and well-paced tutorials. Additions to the assassination formula are quite sparse; you get two hidden blades instead of one (which proves doubly awesome), you can pickpocket and blend more easily in a crowd including with courtesans, and the free running is slightly refined. On paper it doesn’t seem like much has changed, but in practice it feels like everything has. It’s much more engaging and entertaining, making the first Assassin’s Creed feel like a ten-hour technology demo- which it was. The combat has particularly improved, with the cracks in the artificial intelligence showing much less frequently. They are obviously still there, but the developers have done a much neater plastering job this time around. It confirms my previous suspicion that the mechanics underlying Assassin’s Creed were a strong foundation, merely lacking a game to take advantage of them. One of Assassin’s Creed’s biggest flaws was its lack of variation. Rather than one twelve-hour game, it felt like playing a one-hour game ten times. In contrast, ACII has a staggering wealth of content. One moment you’re piloting a gondola through the canals of Venice, the next you’re riding a chariot through the countryside, then you’re steering a hang gilder through the skies at night. It’s that constant feeling of discovery, that you’ve barely scratched the surface of what the game has to offer even after fifteen hours, which keeps you glued to the television. Hidden locations offer enticing trinkets and evoke memories of Prince of Persia: The Sands of Time, while even the obligatory collectables like feathers and flags don’t seem quite as irritating as before.

They’ve even managed to sandwich in some long-term property development: Ezio’s base of operations is the buttressed town of Monteriggioni, a hovel that can be redeveloped with the florins you earn from killing people and going all Robin Hood on the richer townsfolk. Rebuild the blacksmith and you’ll unlock new weapons and armour. Renovate the bank and you’ll increase the size of your coffers. Revamp the whorehouse because it’s funny to revamp a whorehouse. It’s yet another injection of character into a game that sorely needed it, enriching the experience and elevating it beyond a mere game into an eloquent work of fiction that is worthy of respect and admiration. It’s a carefully considered title that encourages us to meditate on the nature of death, rather than merely cause it to satisfy bloodlust. Not every kill is necessary, but almost all of them have a point. Also, most are made with pointed objects, but that’s not the point I was trying to make.

Assassins Creed II is not the sequel to Assassins Creed. Assassin’s Creed is the prequel to Assassin’s Creed II. It’s not just a sequel that fixes every major problem with the original game: it’s a sequel that leaps on top of its predecessor, stabs it, hides the corpse in a hay bale and then kills the witnesses to further reduce its notoriety. It’s such a massive leap that it’s amazing to think they’re of the same stable, but then again like all good assassins, maybe it should sneak up from behind and deliver a killing blow when you least expect it.