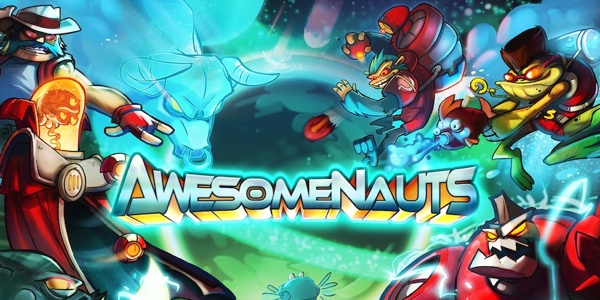 When you first play Awesomenauts you may think it’s a game about short, snappy deathmatch battles like every other online action game released in the last ten years: blitzkriege, kill streaks, more explosions than Michael Bay’s annual fireworks display. Nothing could be further from the truth. In my first game, I immediately raced into the opposing team’s territory, blasting through enemy robots like I was playing Metal Slug. Crawls like a slug, quacks like a slug, right?

I died. I failed over and over again. I had no idea what I was doing. I was being demolished by a computer opponent of the most rudimentary intelligence. It wasn’t even close.

I fled to the sanctuary of the main menu to lick my wounds: perhaps in my enthusiastic attempt to kill everything, I had overlooked how to actually play this game. Let’s start from the top. Choose your Awesomenaut: dynamite-smoking Sheriff Lonestar, Leon the one-armed chameleon assassin, or my favourite Froggy G whose personality is best described as ‘frogsploitation’. These bounty hunters, carefully selected for awesomenauticity, are propelled from orbit in teams of three to expel whoever is around and exploit the natural resources for commercial gain.

‘Solar’ is the shiny MacGuffin we’re collecting this time around, which gradually accrues during each match and is dropped by destroyed enemies. Solar is spent to improve skills and weapons at the shop/healing tube. Your goal is to destroy the enemy base on this suspiciously symmetrical world, but the path is blocked by giant automated turrets whose gatling guns will shred even the hardiest ‘naut into chunks.

Each base pumps out a steady stream of small robots you’re encouraged to use as ‘meatshields’ (which is, let’s face it, technically inaccurate): the worker bots absorb turret fire while your team of ’nauts assault the turret, eventually breaking through to the base.

Of course, the other team – whether AI or human- is trying to do the same thing. Fights in Awesomenauts are long, drawn out affairs where teams chip away at the turrets and take potshots at each other. Dying takes players out of the action for around thirty seconds, so it’s preferable to teleport back to your base and heal up rather than taking one for the team.

Teamwork is mandatory, which is what makes Awesomenauts a dull game to play against the computer. Each ‘naut has a wildly different set of abilities: heroes waiting to be unlocked include a hulking robot modelled on Trap Jaw from He-Man, an alien wizard who can heal, Barbarella on a hoverboard and a monkey attached to a laser jetpack. The game certainly doesn’t lack imagination and fizzles with good-natured humour from the cartoon stylings to the childish post-mortem taunts.

It’s a game that deserves more attention than a demo can offer, because it takes time to unravel its layers. New abilities, characters and stages are released as a slow trickle; too slow a trickle by far, actually, since you’ll only be able to play on one stage for the first few hours of play. While the starting characters are varied, it’s hard to stomach being attacked by a laser monkey that you can’t commandeer yourself. I suspect a lot of players will be put off in the first fifteen minutes and won’t invest the time needed to get the most out of the game.

Awesomenauts is a well-designed, polished and charming game… that never really won me over.

I fooled you there, didn’t I? Although game reviews normally end with a string of complimentary adjectives, that’s not the end of this story. Awesomenautsmade me question my own sense of taste: there’s nothing technically wrong with it. It is well-designed, polished and charming. It made me laugh because it was funny, not awful. It didn’t crash once, ran well on my old laptop and I didn’t feel incompetent despite never winning a game against humans. Yet all that was of absolutely no consequence to the overwhelming indifference I felt towards it.

Maybe it’s no coincidence that most games like this are fast-paced. The urgency isn’t as important as feeling like your actions matter, and that’s something Awesomenauts fails to convey. When you’re fighting a war of attrition that can last for over thirty minutes, your attacks graze turrets and enemy bases: it’s not the same as capturing a flag or holding a control point against an onslaught of competitors. If I don’t make a difference, where’s my incentive to play? If an act of skill can’t turn the tide of battle and stay in your memory forever, what’s the point? Playing through a protracted match and earning a few measly experience points is unsatisfying- all for ’naut, if you will.

Although Civilization games are about slow tactical decisions and gradual escalations over isolated pockets of frivolous violence, your immediate moves still allow for a sense of action and skill. Civ and League of Legends are rife for story generation, not just through lore and fan fiction, but through our varied choices and actions in the world. Compare Awesomenauts to Frozen Synapse, a strategy game that compels the player towards urgent action when none is actually required. It’s turn-based but it feels immediate; Awesomenauts is in real-time and feels sluggish.

It doesn’t seem like your skill matters as much as having unlocked a character who can heal. Experienced team have a distinct tactical advantage over teams of newcomers. Sure, you could play offline and level up a bit to unlock new ’nauts as I did, but should you really have to? Wouldn’t it be better to have all the characters available from the beginning and unlock more interesting abilities over time in the style of Diablo? While it’s true that one ’naut’s not intrinsically better than another, being a good teammate is about filling a niche, and if no one in your team can play as a medic or support class you’re going to be dominated by those who can. Even Battlefield 3, a game that constantly throws unlocks at the player, is less intimidating to a newcomer than this.

If the point of Awesomenauts is to provide a fun and family-friendly alternative to the untamed wilds of DOTA and League of Legends, then in that sense it succeeds. It isn’t a bad game at all. But for me, when your list of unplayed Steam games would win first prize in a “name every PC game” competition, being ‘not bad’ just isn’t good enough.