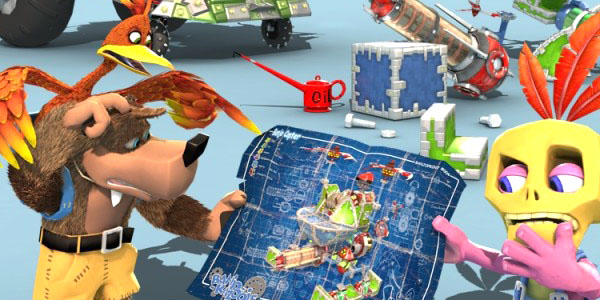 It was around the time I won the Jiggoseum hurdles race when it all clicked for me. Everyone else’s vehicles were equipped with springs behind their tyres to vault over the hurdles. I opted for my patented WindowPlane airplane, modified with newly acquired small jet engines, waved ta-ta to the starting line and rocket propelled my way to victory.

Flying over the hurdles and through the checkpoints in record time I was stunned: This game encourages me to build inventive vehicles and then rewards me for my ingenuity/game-breaking pimped out rides.

Banjo-Kazooie: Nuts & Bolts is the true and correct definition of a game. Rare provides the challenges and the vehicle parts; you build the cars, bikes, ships and planes to rise to that challenge. These are opportunities where your performance, your skills, actually matters. The vehicle creation delivers completely where Spore failed. My Eight-Legged Golden Spydah Monkey in Spore’s reality, though a gene pool masterpiece, was no more different than its bipedal predecessor- possessing the same largely irrelevant stats.

In Nuts & Bolts however my mechanical beauties adhere to the indefatigable cartoon laws of physics. Twice the engines equal twice the speed. More wheels mean more grip. Goofy weapons like the Egg Guns. Freezeezy and Boot-in-a-Box provide the comical kick necessary to elevate races from boring sims to Mario Kart bliss. There’s real consequence to the designs but, as in Spore, they are as easy to make as snapping LEGO bricks together.

The variety of challenges available is reflected well in the wealth of weapons, gadgets and gizmos. Races and deliveries over land, air and sea are standard fare but the range of vehicle-based feats of strengths (sumo wrestling, football, catapulting, demolition to name but as many as I can recall) pose the most interesting challenges which are worthy of ridiculous and imaginative designs. Crucially there’s the freedom to pick and choose what to do and how to go about it. Once I’d perfected my roadster (EveryEngine) I banked as many golden Jiggies as I could from the straight races. After building a decent air taxi (BoxoCopter) I could modify it for the football match (BoxoFooty) and water polo (BoxoPlankton).

The default chassis and purchasing readymade Humba blueprints spared me from drag and hassle of starting from scratch when I wasn’t in the mood. You’re as much of a mechanic or driver as you want to be, and having the option is very refreshing.

So upon discovering the Terranium of Terror to be a claustrophobic and messy world, with the first few challenges I tried being a bit lame, I didn’t have to slog through a bad patch. Instead I went back for the coveted TT trophies by besting my times in earlier challenges. As I accrued new equipment I regularly, willingly, retook challenges in order to test a new plan of attack. I never do time-trials or leaderboards but here it made sense and, shock horror, was fun.

The leaderboards for once aren’t broken either. Yes the top scores will be unnervingly good but with the option to watch their replays and learn their secrets is a wonderful and helpful inclusion. Seeing how the savants blitzed the Spiral Mountain final fight (six challenges using the same vehicle) in under a minute or how they destroyed the igloo in one swift move by constructing a literal giant wall on wheels is inspiring. The most inspired choice Rare made was ditching the traditional idea of plot as motivation. Incidentally the opening segment where they lampoon the series archaic past by presenting a morbidly obese Banjo with a mile long trail of pointless collectables for him to waddle his way through is one of the greatest openings since BioShock. With eight years between Banjo-Tooie and Nuts & Bolts, it’s no surprise Banjo got fat and of “questionable relevance” to quote Gruntilda the Witch.

The bird and bear are known for breaking the fourth wall so Rare opted to build worlds using those self-referential bricks. How else could you get away with Banjoland, the museum comprised of sand, snow and underwater levels from the previous two Banjo-Kazooie games complete with nostalgic displays and information kiosks? Or how about the inside-joke that is the LOGBOX 720, set within a video games console where the majority of puzzles involve overheating issues?

It’s no Hollywood epic where pressing buttons cues up the next scripted action in some loose correlation. Nor is it the concealed rollercoaster ride where the tracks, machinery and challenges are disguised with clever writing and art design. It doesn’t just so happen that Sera is at the perfect height for Gears to crouch behind.

Instead Nuts & Bolts embraces what it is: a game about quick, little challenges and building nifty, little vehicles. There’s a tactile sense of purpose to the worlds which, like MineCraft, feels completely unique to what everyone else is doing.