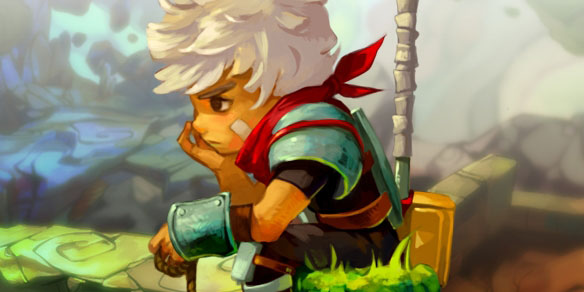 Every step you take… I’ll be narrating you

Gaming is still a medium in its infancy, and there’s no better example of that than in its approach to storytelling. We’re yanked out of the action to watch a hammed-up cut scene, where an animated model does the cool things you should be doing. We stare into space while the villain gives his big speech and your bullets ricochet off his smug, impenetrable face. Games never quite get it right. We want to create the story through our play, not passively follow it like we’re reading the stops on a subway route.

Bastion has a unique approach to this problem: a narrator tells the story while you play, describing your every move. Real time narration in a computer game is, of course, nothing new: sports titles have been doing it for years, with varying degrees of hilarity and inappropriateness. Bastion‘s narrator has more to offer than just auditory feedback, though: sounding like Morgan Freeman with a mild hangover, he acts as the replacement for a crass neon destination arrow or an insulting waypoint on a mini-map. He encourages us to explore the world without dragging us through it by the retinas.

There is real beauty to this world, hand-painted and bursting with life despite its destroyed nature. It has been literally torn apart by the Calamity, reforming itself around protagonist ‘The Kid’ as he walks. The eponymous Bastion is a magical terraformer, designed to fix the events of the Calamity. The Kid must rebuild the Bastion and restore the world to its former glory: in true video game fashion, this leads to a series of item-fetching gauntlets against the feral beasts of Caelondia, but there’s a lot more to it than that.

Like the reconstruction of the land under your feet, the story falls into place piece by piece. There’s a continual drip feed of information from the narrator that builds our knowledge of the Calamity that has befallen Caelondia, but that’s not nearly as interesting as the main characters or even the enemies you face. Rucks the narrator and other characters you recruit to the cause shed light on the cultural collectables scattered across the landscape. Even the gods- mere toggles to increase risk and reward, really- have their own back-stories and personalities. There is a history and richness to Bastion’s mythology that is unusual for a downloadable title, going beyond the call of duty, and well beyond Call of Duty.

It’s so well written that it puts most other games to shame. I was hooked on every line and so desperate to hear more that I was smashing every piece of scenery with my hammer and jumping into chasms just to see what the writers had included. I was never disappointed: after showing the mementos I’d collected to Rucks and pestering him for conversation, he remarked: “Sometimes, there’s not much left to say”. I left him alone.

Unusually for a game packed with dialogue, very little is superfluous. Instead of hunting for items and treasure, you search for jokes and flecks of speech. If you’ve come for the thrill of the kill, the scramble up a leaderboard or the ka-plink of achievements unlocking: these are all here, all enjoyable, but they’re by no means the main attraction.

With all the talk of story, character and beauty, it’s easy to forget it’s a computer game. Bastion’s influences are diverse: there’s everything from the isometric monster mashing of Diablo to the balletic dodging and weapon switching of Bayonetta, with an art style not dissimilar to Disgaea. Yet for all the sources it draws upon, it feels unique and engaging. Collecting vaguely magnetic blue things to spend on items at the shop and quaffing potions for health are not daring innovations in game design, but they certainly don’t feel tired.

There’s as much nuance to the fighting as there is to the narrative. The Kid can wield two weapons from an ever-expanding arsenal of guns, bows, bladed weapons and their associated special skills. As well the time-honoured roll to dodge enemy attacks, he can break enemies’ resolve and spinal cords with a timed bash of his shield and even reflect projectiles back into turrets. While there’s definitely skill and timing involved, it feels satisfying without being terribly challenging. Cleverly, players can invoke the wrath of the gods to up the stakes: enemies become faster and more ferocious, or drop explosives onto the ground when they are killed. It’s great to have choice and satisfying to succeed.

This emphasis on choice pervades the entire game: the Bastion is gradually rebuilt according to your will, and there are some big decisions at the end that took me by surprise. Players can walk their own path (well, not literally- you’ll plummet into an abyss if you stray beyond the narrow walkways), as there aren’t any terrible weapon or skill choices. You’ll want to mix things up as you progress, because they’re all fun to use. There’s no point at which you get stuck by choosing the wrong load out, but some combinations are more effective than others: armoured Lunkheads are quickly incinerated with the Fire Bellows, while the Army Carbine’s interminable reloading compensates for its ferocious punch.

While the action is well paced and varied as you progress from one area to the next, it’s in the titanic hallucinogenic battles that the strength of the mechanics shines through. Take a drag on a hookah at the Bastion and you’ll be transported to ‘Who Knows Where’ in a drug-induced haze, where you can try different combination of weapons and skills against endless swarms of fiends. It’s not just padding either, as Rucks takes the opportunity to fill you in on the Kid’s backstory while you face some of the game’s sternest challenges.

There’s more than enough content and variation to feel satisfied: optional Proving Grounds challenge you to master each weapon for extra loot, while weapons can be modified at the Forge- often diversifying their utility rather than just boosting their power. As the Kid gains experience from battle and levels up he doesn’t bulk up much, but he can imbibe increasing numbers of potions from the Distillery to augment his abilities.

Nothing is ever set in stone, which encourages you to explore every option rather than be damned with your poor judgements. It’s a world you’ll want to explore again and again: even if the adventure is a linear one, it’s the feeling of choosing your own fate that makes it so immersive and compelling. Whenever the player is given so many micro-decisions, the fact that we aren’t in control the large ones is obscured. That’s what great game storylines are all about: the illusion of choice, which Bastion succeeds in maintaining from start to finish.

Bastion is not just a great game: it’s a beautifully articulate, heartfelt and poignant work of fiction.