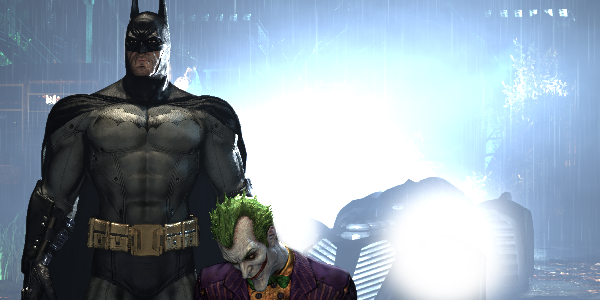 Batman: Arkham Asylum is the quintessential contemporary videogame. As impressive as it is on its own merits, it also showcases the many genius ideas that have made recent games great.

Assassin’s Creed: Fluidity and simplicity of movement, exploring the full verticality of the world

Considering how deftly competent Arkham is it’s surprising it came from the relatively young Rocksteady Studios, whose prior work consisted only of Urban Chaos: Riot Response. Throughout there is constant feedback and guidance, communicated cleanly by its clever display and architecture. It’s crystal clear what can and what can’t be done.

The comfort of never worrying about the game’s machinery results in the sublime joy of being able to sit back, take in the spectacle and enjoy the ride through Gotham City’s crazy house. It’s the kind of completely capable design that works so well, it almost goes unnoticed. It’s a Valve-level ride.

Prince of Persia: Fallen off a ledge? Quickly fire a grapping hook to avoid plummeting to your death. Classic setup has the hero essentially stripped bare at the beginning, with the sense of progression accomplished as the hero becomes more powerful, acquiring new weapons and skills. Works perfect for everyone who is not a superhero or a multi-billionaire. Why should I have to teach Spiderman how to swing a web?

In Arkham, Batman is empowered from the first swoop down on an unsuspecting thug to his final face-off against the Joker. He’s broken faces since before I was born and so while there are new Batarang variations and fist-to-goon combos to unlock, there are genuinely powerful options available in his deadly arsenal from the very beginning.

Hitman: A group of henchmen patrolling a room becomes a locked-room puzzle where spotting movement patterns and inventive use of bat-gadgets is rewarded.

Will I sit atop the rafters and stealthily pick off enemies one by one, playing the master strategist, or will I run in head first and clean house as the kung-fu master?

The challenge then comes in the form of slowly reducing those options. The safety of escaping encounters by swinging up to the rafters comes at a price once they’re rigged with explosives. The appearance of tougher henchmen requires specific attacks and counters to be incorporated into the free-flowing combat. Difficulty is focused and not arbitrary.

Above all else, the greatest idea was setting the game within Arkham Asylum. The genius location affords access to the wealth of Gotham’s colourful villains under the same roof and it’s through their variety that Arkham shows its breadth of styles: battles with Bane are brute force showdowns, Joker henchman are ripe for methodical takedowns when not defusing their twisted traps, and most brilliantly the plethora of Riddler puzzles and Joker teeth sprinkle value into every nook and cranny of the Asylum. The Riddler challenges are one of those rare examples of collectables done right: I found value in learning of Batman’s many C-list villains (Calendar Man, really?) and it was a clever way of drawing attention to their art team’s work which, in so many games, is glimpsed and then forgotten.

Many of the stand out moments involve psychological encounters with the Scarecrow. A retelling of Batman’s origins as well as some fourth-wall breaking in the line of Metal Gear Solid and Eternal Darkness are particularly clever.

As revealed in the secret room in the Warden’s office, Rocksteady Studios were laying down the ground for the sequel (Batman: Arkham City) during the development of Arkham Asylum. Yet it’s done with such care and thought, as evidenced by their calculated use of only some of Batman’s big name villains, that it doesn’t come off as the greedy beginnings of a cash-hungry franchise. Instead it shows restraint.

Walking by a lone cell enshrined in ice made me giddy knowing who I’ll be seeing later, which I would almost be ashamed to admit if I weren’t 700 words into a review of a Batman videogame. Probably would help as well if this were the first time.

Its restraint however doesn’t save it from wavering at times. Of the antiquated boss battles there is: one type of battle which is repeated half-a-dozen times too many, one squandered and ultimately anticlimactic battle in a the sewers and a frankly absurd and confusing final battle against the Joker which really should have been over in one swift, but satisfying, clown suckerpunch.

Other oddities from the past remain particularly upsetting too.

That being said as I continued playing past the story’s conclusion, cleaning up the remaining Riddler puzzles and undertaking the various time trial modes, as the skies of Gotham erupted in a celebration of fireworks, I did think, “You know, why aren’t other games like this?”