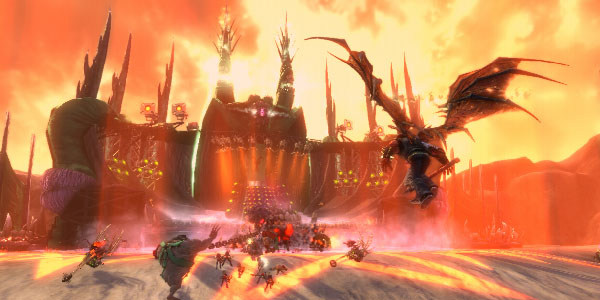 A real time strategy game that plays well on a console is a holy grail of sorts. It’s an odd shaped grail and there aren’t many people craving it. And yet the surrounding area is littered with the corpses of those who try and fail to repackage the PC experience for the console.

Halo Wars, Supreme Commander and the Command & Conquer series squeeze and manipulate the numerous keyboard and mouse commands down onto a controller using the hallowed art of transmogrification; tiered radial wheels, expanding catch-all circles and combinatorial button presses facilitate controlling what remains a convoluted array of minimaps, unit and building panels, message alerts and resource counters. They remain at heart traditional RTSs ripped out of their natural PC habitat.

Pikmin, Overlord, Civilisation Revolution, Viva Piñata and now Brütal Legend on the other hand are true console RTSs. Their fundamental mechanics, and not just their controls, are eloquently designed from the very beginning to live and thrive on a console.

Brütal Legend is quite a remarkable RTS for a number of reasons. It avoids excessive multi-tasking and intensive micromanagement. It helps to play as an on-screen character rather than an omnipotent general whose invisible hand comes down from the sky to build another foundry or order around some minions. It avoids giant mechanised warriors and space marines. It has a proper sense of humour that a real human person might enjoy.

The heavy metal world may be from Spinal Tap but the fights are straight out of Braveheart. The RTS battles, which play out more like street brawls, come down to you fighting and pushing the frontlines yourself as much as by creating and ordering units around. You’re still the army’s general but you’re buried in the middle of the action. Ordering units around is simply a case of Follow Me, Go Over There, Stay Here or Beat Lumps Out Of That Guy Over There and apply to any troops in close proximity. You can technically split up your army but it works best when all the troops move together and are within easy reach in order to pull off the devastating double team attacks. There’s something palpable about being in the thick of battle and thinking “I’m here with all my friends and we’re tearing this place apart!” before returning to the job of grinding down some more enemies with your axe.

So the riskiest aspect of Brütal Legend, RTS elements which were barely mentioned in any of the extensive previews, is its greatest accomplishment. There’s a perfectly serviceable multiplayer available if you’re that way inclined.

I’m not that into the multiplayer which is why Brütal Legend’s completely lacklustre single player campaign is so disappointing. Double Fine created a beautiful and open world for a game that should never have been an open world game.

Not since BioShock has the mood of the world been so evocatively told through the world itself; the rocky cliff sides of chiselled stacked amplifiers, the giant stone guitar monoliths, the chromed engines of fallen titan beasts and even the petals of flowers that turn out to be tiny devil horns and drum cymbals together scream more heavy metal than the already awesome soundtrack.

But the vast majority of the world is in service of nothing. There are occasions where the vast structures are used to great effect like the first fight in General Lionwhyte’s glam rock palace and the jungles of the KISS Amazonians, but everything else is a pretty showcase of how talented and imaginative their artists are.

They acknowledge this to an extent by placing Landmark Viewers that cue up a short panoramic video roll of the vista. And after you watch the short video of the giant landmark that you spotted earlier over the horizon and decided to check out, you can watch the video again or something. The world is visually rich but ends up feeling desolate. Most noticeable is the lack of variety in side missions, the repetitive nature of which would not be as glaring an issue had they not decorated the map with markers saying explicitly, “There is an ambush mission here”. Upon completing the ambush you are unceremoniously dumped back in the world, alone, and the map marker is removed saying explicitly, “There is no longer anything to do here”.

Also developers should note that decorating an open world with 200 odd collectables does not equate to 200 fun things to do. It is one prolonged boring way of disguising nothing as something.

Had the campaign been linearly structured with Double Fine properly guiding the player through the world then many of the faults would disappear. Exclusively pursuing the main story quests which move through the world in a more ordered, on-rails and satisfying fashion suggests exactly that. Regardless of the decision to make Brütal Legend open world the plot is awkwardly paced. The really great moments are all front loaded to the first few hours, the momentum of which is lost through the middle of the game. The final battle and cutscenes then unload a number of twists and reveals that get dangerously close to “Why didn’t you realise that I, the villain, mated with your mother and may in fact be your father, bwahahaha!” which threatens to topple the triumphant conclusion into complete inanity.

What turns out to be the most engrossing story is unsurprisingly the history of the world. The origin of The Fire Beast Ormagöden, whose demise created the heavy metal landscape, is sadly squandered delivered as it is through sombre narrations over pieces of concept art which are locked up in thirteen Artifacts of Legend.

I’ve avoided talking about the plot or characters in any detail because they’re the most entertaining aspect to Double Fine’s games. This enjoyment increases exponentially for each heavy metal album you own.

However if you’ve still to play Psychonauts then there is at least one game you should play before Brütal Legend.