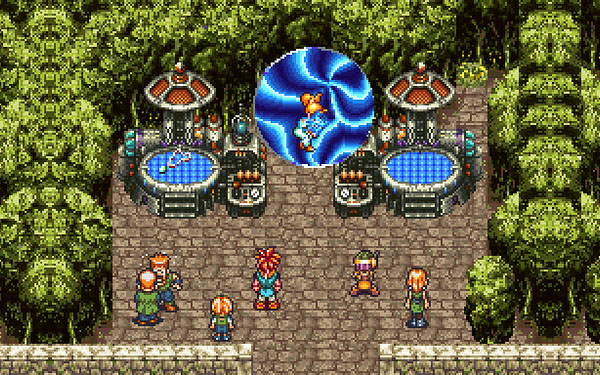 If I Could Turn Back Time

Once upon a time, there was a game developer called Square Enix. After several years of inventing and refining the concept of the role-playing game with their Final Fantasy series, they produced the critically acclaimed and multi-million selling Chrono Trigger. Then at a board meeting one day, some overpaid executive decided gamers in the UK would be much happier playing FIFA 95 on the Mega Drive instead and decided not to release it here. Man, I hate that guy.

Fifteen years later and Chrono Trigger has finally reached the shores of Britain in an enhanced package that takes the best of the Super Nintendo original and later Playstation variant. If anyone is unfamiliar with the Japanese role-playing game: you play a silent, brooding protagonist who uses swords in a world with readily available firearms, you will befriend a motley crew of characters including at least one animal, a femme fatale and a reformed bad guy, to defeat an ancient evil that resurfaces every 1000 years or so (which, somewhat inconveniently, happens to be today) and this objective is achieved by killing hordes of monsters with spells and having mammoth conversations despite the alleged urgency of the task at hand.

Luckily for cynics like myself, Chrono Trigger is adept at taking the conventions of the genre and throwing them out of the window. The game’s focus is time travel, in case you didn’t guess from the title, allowing for some clever writing and ingenious cause-effect relationships to surface. With the ability to travel from prehistory through a post-apocalyptic future, your actions in the past shape the future.

In an early highlight, you’re put on trial and asked about events leading up to it. Some hilarious truth bending on the part of the prosecutor ensues as you realise how little you actually remember. You’ll want to replay this section just to see if things can turn out differently next time. The quality of writing is not limited to the main quest: lead characters have real personalities and histories. Discovering these is optional, but they are compelling enough to seek out that the choice is barely apparent.

The somewhat stagnant battle mechanics that have become a genre staple are much improved. Rather than encountering foes at random (perhaps the worst idea in game history alongside the interactive movie) enemies wander the screen for you to engage, or more importantly avoid, at will. A fast-paced battle system keeps the emphasis on quick decisions and progressing with the game’s story, with no need to spend time buffing up your characters in order to progress.

Not all is well in this re-release, partly due to the limitations of the DS. The art design has lost some of its charm in translation, appearing smaller and less detailed throughout. That said, the use of original artwork is preferable to a modern revamp. Unfortunately, the animated cut scenes of the Playstation version- directed by Akira Toriyama of Dragonball Z fame, no less- have also been included. These try to fill in the aesthetic gaps where your imagination normally steps in: my imagination is both better and cuter, apparently. Additional content in the form of new areas and quests lacks the attention to detail that made the original game so impressive. Mercifully the celebrated soundtrack has survived the conversion unaffected and is worth cracking out a decent pair of headphones to savour it fully.

Chrono Trigger is, if you’ll forgive the pun, a game years ahead of its time that puts modern contemporaries to shame. Just as fresh as it was in 1995, it is a delight to play even for those lucky enough to have done so before. For the rest of us, which represents the vast majority of the DS owning population, you need this game more than oxygen.