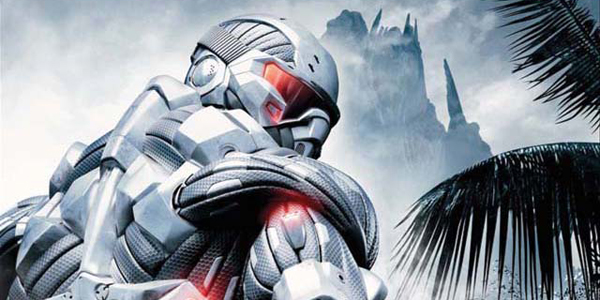 What would happen if someone confused Arnold Schwarzenegger with his character in The Terminator? Arnie is giving a press conference when a fan sneaks up and breaks a chair over him, which the Terminator would obviously find hilarious if his circuits facilitated humour. The fan realises the folly of his error as Arnold lets out a guttural scream, scrambling at the chunk of wood lodged in his eye. In Crysis you’re not the Terminator either, but it’s easy to make that mistake and be shredded by machinegun fire within two minutes of starting the game.

If you’re not the Terminator, then which Hollywood action hero are you? Your state of the art nanosuit’s abilities allow for a varied approach to every gunfight, mitigated by your computer’s hardware specifications. If, on an underpowered machine, your running and gunning antics attract the attention of more than five angry North Korean stereotypes, the action slows to a standstill; so you’re forced to become the Predator and survey every encounter carefully.

Luckily, being the Predator is great fun: using your suit’s cloak function renders hero Nomad invisible, allowing you to creep around the dense jungle before unloading a shotgun into an enemy’s teeth when they least expect it. You can stalk your prey and tag soldiers with your binoculars so they show on your radar. Most weapons you collect can be augmented with a ranged scope or laser sight, letting you pick off targets from miles away. This is a welcome change from Crysis‘ spiritual predecessor Far Cry, which featured enemies that could kill you with their sniper rifles before they were actually drawn on-screen. Playing Crysis on my three-year old laptop is like watching Terminator 2 with the special effects reworked in stop-motion papier mâché. It’s difficult to talk about Crysis without mentioning that it requires a super-computer to run properly, a fact to which the long-standing meme “Yeah, but can it run Crysis?” can attest. Even with the visuals toned down, it remains a great-looking game. The art direction is stunning: crabs scuttle along the golden sands, trees sway in the wind (whether natural or as the result of explosives) and water trickles down surfaces during the rain. Even though Crysis was released in 2007, it remains an audiovisual delight. There’s nothing wrong with using your good looks as an asset- Hollywood blockbusters are all about the spectacle, the shock and awe of the delivery- but I’ve never seen a film that required a eye upgrade to fully appreciate it. While it’s great to have nice looking games, they also need substance underneath the surface. My computer can’t render substance under the surface, by the way; I had to turn off the advanced water effects.

Like my laptop’s graphical capabilities, your suit’s powers are finite. In fact, they are crippled. Cloaking, enhanced armour and super speed all draw on a single pool of energy that drains in mere seconds. Fire when cloaked and your suit’s energy is completely depleted: a winning strategy is to cloak, kill a couple of soldiers in the ensuing confusion, then run and hide behind a rock until your energy recharges and you can cloak again. Who says heroes can’t be cowards?

Unlike Halo‘s Master Chief, you’re not a super soldier: you’re a decent soldier with occasional delusions of grandeur. Where Chief can rip guns from their hinges and flip over jeeps like he’s playing with giant Pogs, Nomad must recalibrate his suit when he wants to be mighty. Where Halo was peppered with fire-fights against intelligent foes, Crysis is all about juggling your abilities and keeping an eye on your energy. This doesn’t make for a worse game, but it does make the suit’s claims of achieving “MAXIMUM STRENGTH” ring hollow. “BOASTS ENGAGED” might be more fitting.

Most shooters consist of a series of corridors, stapled together with cut-scenes. If you’re really lucky then you’ll get a square room along the way with enemies coming in from two sides, but it’s generally a linear trek from one section of the slalom to the next. Crysis‘ encounters are more free-form: you can storm in guns blazing like an idiot, sneak in and cause a diversion, riddle your foes with sniper fire from a distant hilltop or even sidestep the battle entirely if it’s not a critical objective. It’s natural that players will find their own groove, but the game encourages you to mix things up a little. You can be Steven Seagal in any of his generic 80s action films and improvise weapons from household objects: throw a sea turtle as a deadly discus, drive a truck into a guard tower and watch it collapse thanks to the realistic physics, or grab a soldier by the throat and fling him at his friends if you’ve forgotten the button for pistol whipping.

One limiting factor on your creative destruction is that, on the standard difficulty setting (and why should I have to increase it?) enemies are stupid. Cloak in plain sight and they’ll forget you were ever there, goldfish with assault rifles standing slack-jawed in amazement. Climb to the top of a guard tower and they are unable to follow you up the ladder, standing in confusion while you lean over to pick them off at your leisure. Most guard towers have one chap standing at the top, so I presume he is airlifted into it before you get there. It couldn’t be easier if they climbed into barrels and turned into fish. At this point you become Batman, psychologically towering over your foes. The problem is that when winning a battle of wits with an idiot, there’s not much satisfaction to be had. Endless waves of enemies will rush around the corner where their friend’s corpse just fell, gradually building a pyramid of sacrifices to the god of giblets. For the first half of the game, it’s just not that challenging.

The xenomorphs from Alien are among cinema’s most terrifying monsters. Their sheer numbers make them formidable, and their acid blood and multiple sets of jaws don’t help. In the film Aliens, the xenomorphs circumvent the humans’ advanced technology by outsmarting and subsequently eating them. That’s fun to watch. A small spoiler in case you’ve never seen this game’s box: Crysis features aliens. Big, scary, biomechanical monstrosities that freeze everything in their path. Aliens who ignore your nanosuit’s powers and crush you with the most nonchalant flick of their tentacles. That’s not fun to watch, or play.

We’ve been here before with Far Cry and its ‘Trigens’, hulking beasts that took extreme punishment before dying. I hate games that undermine your attempts to learn their ways and improve your skills. Surely that gradual feeling of achieving mastery is one of the main reasons people enjoy them? Forced stealth sections in a non-stealth game are the most egregious (I’m looking at you, Return to Castle Wolfenstein) but enemies that negate your character’s reason for being come a close second.

Imagine playing a Superman game where every enemy is wearing Kryptonite cufflinks. Magneto in a nightmarish world of moulded plastics. A Star Wars game where enemies have shields that are impervious to the Force… oh wait, that actually happened. Midway through Crysis, you find yourself flapping through a zero-gravity world where aliens eat bullets for tea. The aliens become your primary antagonist after this point and the game promptly forgets that super suit you’ve been wearing for the past five hours, or the Korean soldiers you were fighting.

The culmination of this is a terrible showdown with Mecha Squidzilla on the deck of an aircraft carrier, while smaller aliens whizz around and laugh at your attempts to slience them. It’s here that Crysis shows its true, albeit beautifully rendered colours. Ultimately, all the pyrotechnic razzle-dazzle in the world can’t hold up an average experience that flirts with brilliance before settling down with mediocrity. Don’t get me wrong: I had fun playing Crysis, but after a while it began to feel like a chore. For every thrilling vehicle chase or fun dogfight in a jet, there’s a drawn-out battle with alien bullet sponges. For every assault on a Korean outpost, there’s a ten minute slog through the jungle to the next one. For every moment where you feel empowered by the suit, there’s one where you feel outgunned. It lacks consistency.

Which Hollywood hero is Crysis? Clerk Kent: An improbably good looking, thoroughly average bloke with a Superman complex, but that doesn’t stop him from kicking ass every now and again.