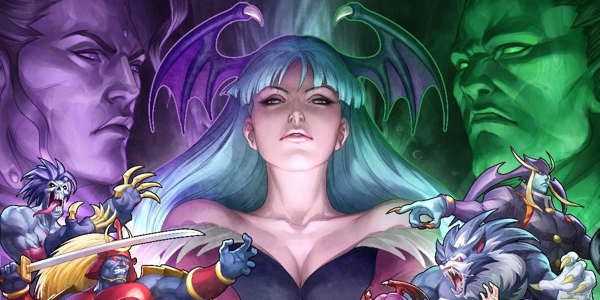 One day, tired of a life spent endlessly redrawing the same characters from Street Fighter, an artist at Capcom decided to doodle something different. Ryu became a vampire throwing bat fireballs, Chun-Li a busty and lusty demon, Zangief a big old Siberian Sasquatch. “Wait a second,” said the artist’s manager, looming over their shoulder. “This just might work- and to think, I came over here to fire you!” And lo, Darkstalkers was born. At least, I think that’s what happened, but I can’t back that up with any hard evidence.

Darkstalkers Resurrection inexplicably omits the first game in the series, including only remastered versions of Night Warriors and Darkstalkers 3 aka Vampire Savior. Night Warriors is an arcade curio: although it introduced innovations like air blocking, dashes and chain combos which were exciting at the time, it feels dated and is unlikely to hold your appeal for long. Rest assured, if you’re a Night Warriors fan, this is a superior conversion. Vampire Savior, on the other hand, is a more enticing prospect: as a child, I remember reading about the impressive Sega Saturn conversion (the Playstation edition was a bit of a disservice) and weeping at the cost of an import copy. Years later, with a cheaper price point and considerably more pocket money, it’s time to exhume one of Capcom’s forgotten classics.

Vampire Savior achieves a speed and relentlessness that surpasses most fighters. Don’t be fooled by the first choice the game presents you, because it was meant to be played at ‘Turbo’ speed. It’s all about flow: chaining attacks through Light-Medium-Heavy, your fingers tapping out arpeggios of pain on the controller; cancelling attacks into specials and supers; leaping up after losing a round when the game barely pauses long enough for Scooby Doo’s Cerberean cousin to bark “FIGHT!” It encourages aggressive followups with a system that allows combatants to recover health by retreating. Only Street Fighter 3: Third Strike comes close to feeling this right, so mechanically finessed. Yet despite the deceptive accessibility of a game that has optional automatic blocking, the tutorials are just as impenetrable as a fighter like Blazblue, showing there is true depth beneath the cartoon exterior. Tutorials are aimed at experienced players rather than newcomers, but the basics are easy to grasp.

My opening paragraph was admittedly facetious: although Morrigan plays like a Ryu clone and Victor is a reanimated Zangief, there’s enough diversity and personality in the character design to make up for the generic moves. Bulleta (BB Hood in the West… why do Capcom always change the names?) is Red Riding Hood with a basket full of land mines and Uzis, Lord Raptor is basically Iron Maiden mascot Eddie, Anakaris is a pharaoh whose signature move encases you in a sarcophagus. There is a rich sense of humour, a welcome departure from Street Fighter’s po-faced canon as gallons of comicbook blood spill onto the floor while the faux surround sound feels like the speakers are in orbit around your head. It’s an exceptional fighter that can still draw a crowd.

With arcade conversions, you often know what you’re getting into before you start: a target audience of dedicated fans, unlockable concept art and movies to sate a collector’s appetite, an online cabal of obsessive ex-professionals who will pulverise you in seconds. Darkstalkers fans have suffered adultered imitations for far too long, but Vampire Savior’s timeless appeal will ensure new admirers as well. Some corpses should stay dead, but this resurrection is a welcome one.