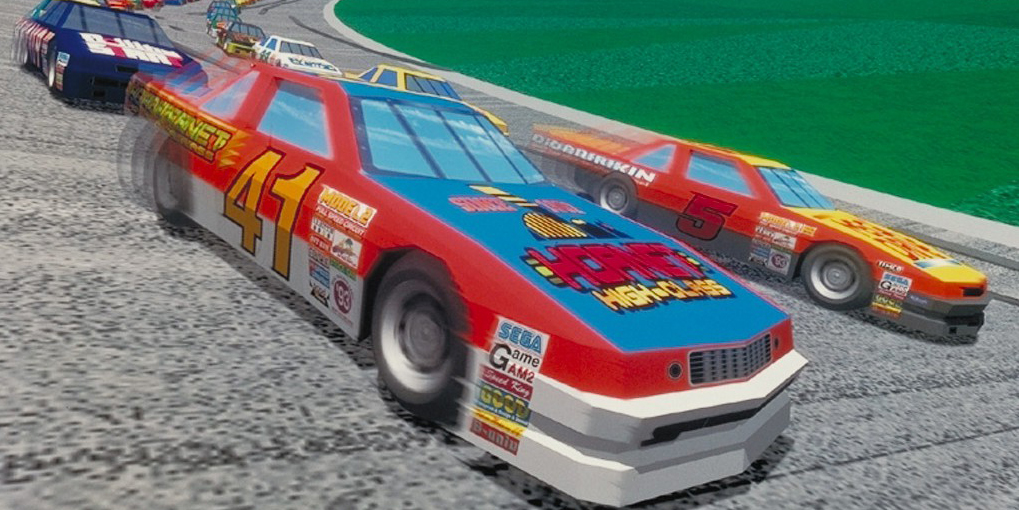 In Portrush, a dilapidated town on the north coast of Ireland, there’s an amusement centre called Barry’s. I loved going there when I was young: hobby horses, bumper cars and a worryingly rickety roller coaster were the highlight of my childhood summers. Those were the days when ice cream was free if you nagged your parents enough: when people asked me what foot I kicked with, I thought it was a genuine enquiry into pedal dexterity and not thinly-veiled sectarianism.

As a fledgling gamer I was drawn to the noise-belching razzmatazz of arcade games: their hydraulic cabinets that dwarfed my tiny hands, the unstoppable gravitational pull of pound coins from my Teenage Mutant Ninja Turtles bumbag and into the coin slot. There was no game more enticing than the legendary Daytona USA.  Forty cars in a race. Eight cabinets linked side by side. Primary colours piercing the cigarette smoke of the arcade like alien floodlights from a world without brown and grey. “DAYTONAAAAA! Let’s go away!” belting out over cheesy J-Rock. It was an extravagant racer often copied (especially by Sega themselves) but arguably never bettered for sheer exhilarating fun.

What’s most enticing about this release is its purity, because this is the Daytona our homes have always deserved but never received. A brief history lesson if you’ll indulge me: the poor old Sega Saturn just wasn’t up to the task of a decent Daytona conversion. Daytona was a release game for the Saturn and suffered from a rushed development cycle: scenery popped out of nowhere like you were riding a ghost train, stuttering along an unlubricated rail. It was a sluggish mess corrected in the subsequent Daytona CCE, which added some great new courses but broke the authentic handling of the original conversion and remixed the soundtrack to a blasphemous extent. The Dreamcast remake Daytona USA 2001 stalled on the starting grid, with rubbish steering and dull speedways.

This time, it’s the real deal. Not a single colour has been watered down; every pixel is in place. Only with a giant high-definition screen and thumping surround sound can you truly appreciate the high-octane thrills of the arcade, impossible to replicate on a 15″ portable CRT. It’s hard to believe this game was made in 1993: while the cars have moving textures painted on the wheels and a trip to the pit lane will make you think the car is being attacked by cardboard boxes, it’s still blisteringly fast and fun. This is the spiritual grandfather of Burnout and Need for Speed, with a hearty chunkiness that warms the heart like vegetable soup on a winter’s day. Daytona is the distillate of what made Sega arcade games so enticing: blue skies as far as the eye could see, perfectly designed tracks that blend authenticity with fantasy. There’s Three Seven Speedway, with Sonic the Hedgehog carved into the side of a more literal Mount Rushmore. Dinosaur Canyon blasts through a tunnel and plummets at breakneck pace into a lush valley. Seaside Street Galaxy is the quintessential massive bastard of a course, twice as long as the others with more nasty turns than I’ve got sarcastic metaphors. There are only three tracks, because three is all you need. You can play them in reverse if your lust for variation knows no bounds, but the fun is in mastering each course and shaving precious milliseconds off your fastest laps.

This is a game of physical absolutes: precision power-slides are initiated by slamming onto the brakes, with careful glances at the speedometer to maintain optimum velocity. Your car gains a top speed boost if you choose manual transmission, which encourages dedication to the craft. Mistakes are punished with a crippling loss of speed as rivals race by. Your opponents are uncaring bricks with all the intelligence of the cars from Frogger, unwavering from their predestined route. You can tell it’s an arcade game as the timer counts down relentlessly between checkpoints, designed to milk every last scrap of currency from your wallet in days gone by. It’s funny to think that if you play each track three times, you’ve saved money over playing the arcade original. It’s a stark reminder of how the value proposition of games has changed. Daytona USA for the Sega Saturn was forty pounds after you’d spent four hundred on the console itself, and it was crap.

Extras are kept mostly separate from the arcade game. There’s an option to rewind after a nasty crash a la Forza Motorsport, an unwelcome concession to modernity that breaks the spirit of the game and is better left unused. Karaoke mode is an opportunity to immerse yourself in the well-loved soundtrack and a series of increasingly difficult challenges will test your mettle at putting pedal to metal. I can forgive the lack of the CCE courses in the roster, because everything else has been so well produced. Daytona supports online racing for up to eight players, which isn’t nearly as good as lining up arcade eight cabinets side-by-side. I guess with enough TVs, Xboxen, network equipment and balsa wood whittling, it would be possible to simulate authentic arcade multiplayer. If any readers attempt this, please send me an invite.

The only way to play ‘real’ Daytona nowadays is by sitting in a soiled plastic seat used as an ashtray in an arcade filled with gambling machines and unrealised dreams, so this is actually a much better proposition. Once upon a time, games didn’t need hundreds of hours of dubious ‘content’. You didn’t need Jeremy Clarkson reinforcing chauvinist stereotypes to endorse your product. Young Alan didn’t have a stack of games to finish: they were completed the day I bought them, and then played over and over because the entertainment value extended beyond all logical boundaries.

This is a relic from that time, lovingly reconstructed. It is not the longest, most realistic or varied computer game in existence. It’s just the best version of the best arcade racing game, yours for the price of lunch. Buy it, and play it until your eyes explode.