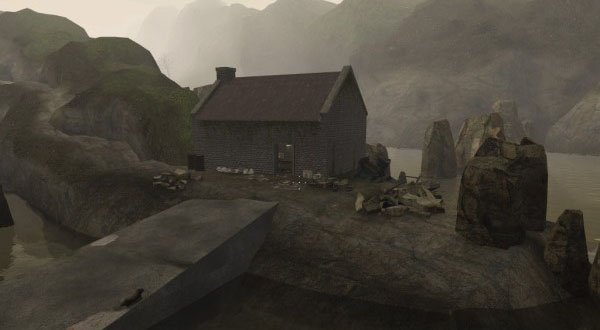 “I sometimes feel as if I’ve given birth to this island”.

It’s rare for me to step into the unknown. With the majority of games writing eternally looking forward to the big-budget games soon to be released, it’s not often I discover something surprising.

Also rare is the unbridled joy, satisfaction and relief experienced when finishing a game in one sitting.

Naturally my only touchstone to how I felt after Dear Esther was that it was somewhat similar to Portal.

But where the second playthrough of Portal tells the same story of Aperture Science, daring escape and cake, Dear Esther is much more nuanced and haunting experience.

Dear Esther’s story, which itself is nonlinear, is told in a multi-linear fashion whereby repeated playthroughs present variations and alternative tellings which complement and augment the impressions gained from the first viewing.

In this way, the story can be directed, within finite limits, by the player in a dynamic way available only to video games.

If this reads like a very technical and scientific way of expressing something emotional and creative then it should come as no surprise that Dear Esther was born in a laboratory in the University of Portsmouth as research into exploring innovative narratives in video games.

It works. It works very well. Dealing with the passing of a loved one, some tragic accident, a deserted island and its discoverer and Biblical allusions, the narrative is told primarily through voice-over fragments which are triggered while wandering and exploring a seemingly deserted British isle.

Because of the dynamic nature in which the story can unfold the narratives intertwine in a way that reminded me of the Brian O’Nolan novel The Third Policeman. Here occasional footnotes chronicling a scientist begin appearing more and more frequently until they completely dominate over the main passage for a number of pages.

In my first playing, the tale of one the isle’s explorers was most prominent and it was only on subsequent plays did the story of a fatal, drunk driving accident begin to emerge.

How cool is that? This game reminded me of a book. Games never remind me of books. Hell, even Gears of War bears only a passing resemblance to the Gears of War novels.

In terms of the actual writing, the monologue is a little too overly poetic but it fits the mood of the foggy hillsides and driftwood strewn coastline. Regardless, it’s invigorating to hear such crisp language which isn’t the hallmark “Go deploy the C4 charge, soldier!”.

Understandably as the story is front and centre, served by visuals, I can tell that for some this will be at the expense of gameplay. Dear Esther is a mood piece, a short story to be enjoyed at a very deliberate, slow pace and while the level of interaction is minimal, the level of engagement is of taut suspense.

I don’t want to detract from the sorrowful music and wistful locale which establish the morose mood, but the aching suspense gripping my muscles was in part thanks to my own personal baggage I brought with me.

Games have taught me that monsters live amidst the fog and that an apparently empty room is a bear trap, primed and ready to snap shut upon entering.

So when I was walking across an apparently empty and foggy hillside, accompanied only by the sound of my own feet, and I heard a second, more rapid set of footsteps coming at me, the fight-or-flight part of my brain fired and I kicked my chair away from my desk and rolled into the middle of my room with both hands firmly atop my head.

It doesn’t matter that it was only a low flying bird. Or that this has happened to me in real life.

In this sense Dear Esther’s bleak, desolate rolling hillscape is all but forgotten, a naturally formed shrine to the past, sparse if not for its century-old cottages and man-made markings carved into the rocks.

Personally, Dear Esther now sits alongside The Passage, Braid and Psychonauts as telling a story rarely told in video games and in a way that is undeniably a stepping stone towards something new and exciting. Currently, the team behind Dear Esther, thechineseroom, are working on a remake of the mod which should be out sometime in 2011. Looking at the videos and new screenshots it’s primarily a visual overhaul with some new additions to the story. If you are from the future and it is after 2011 check the Dear Esther page on ModDB for the latest version.

I played the 1.1 version and it was powerful but certainly not as visually arresting as the remake appears to be.

Technically Dear Esther is a free standalone mod for Half Life 2 running on the 2006 Source SDK. All you need to play is access to Steam and a spare 1.5 GB for the download.

If you download and play Dear Esther, let us know your thoughts in the comments below: