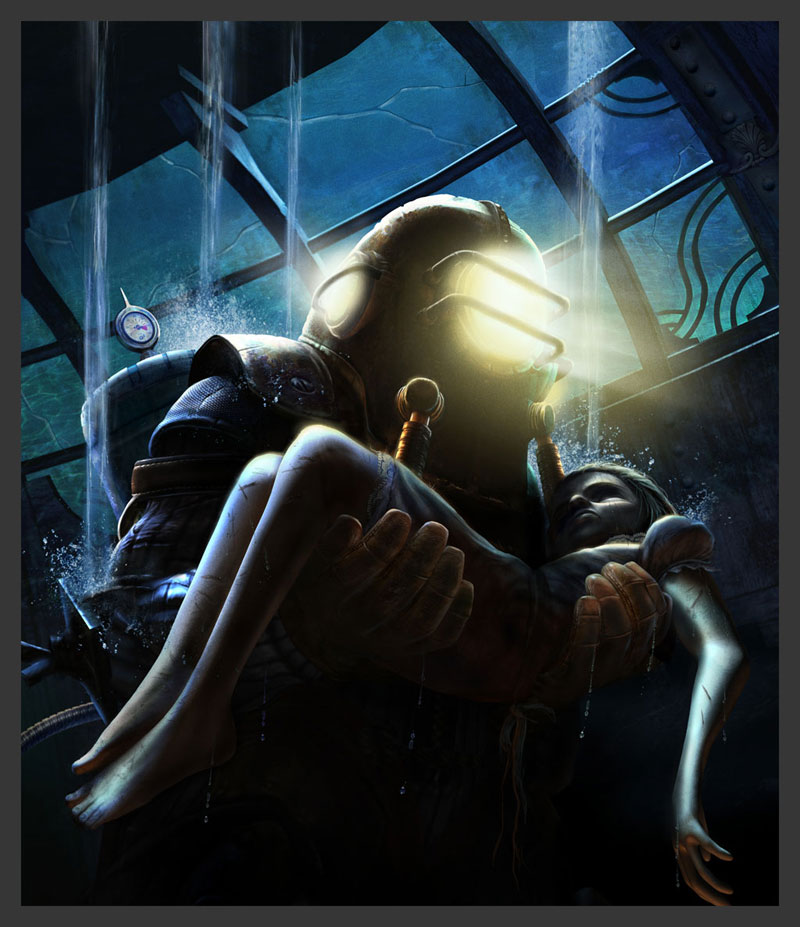 It was September 2007. I was 21 and studying in Edinburgh. My student loan had just come in and like a good, fiscally responsible student, I went out and bought an Xbox 360 with it. Don’t look at me like that! It was my birthday present to myself!

I’m writing this a day after the launch of the PlayStation 4 in the UK. Despite my warning, and the complete lack of worthwhile games, a lot of people went out and bought one. I feel sorry for them in a way (I feel more sorry for their wallets), because a ‘next-generation’ console deserves a true next-generation game to play on it. For the Xbox 360, that was arguably Gears of War, but if you bought one at launch you were stuck with the awful Perfect Dark Zero – cf. the PS4’s Killzone: Shadow Fall.

My Xbox came with BioShock. I hooked the console up to my 14″ portable TV and squinted at the dashboard for a good five minutes, before my dad came to visit for my birthday. He was not impressed with my purchase, especially since there was now nothing for him to buy me.

I turned on the new Xbox. Our necks craned forward, desperately trying to bridge the gap between our eyes and the screen. It was like watching lurid digital soup.

“Do you want a new TV for your birthday?”

One trip to Tesco later – this took hours, as those who have travelled from Southside to Corstorphine on a Saturday will appreciate – and we had a shiny new 26″ HDTV. We fired up BioShock and enjoyed the opening cinematics. The player character bobbed on the surface of the ocean while a plane’s fuselage burned around him. I waited for the cutscene to end so I could start playing. But the cutscene had ended. That’s what the game actually looked like.

At times, BioShock feels less a game, more a tour through an alternate history museum. It’s impossible to separate Rapture as an environment from the game. Those damp ruins feel claustrophobic, but also logical; immaculately detailed and then destroyed before you arrive on the scene. It’s impossible to go back to the brown and grey corridors of older games once you’ve visited this sunken city, and no game since has been able to emulate its world-building (especially not its sequel, BioShock Infinite, which felt so fake and unreal).

So I chose Rapture. I strapped myself into a bathysphere and submerged myself, with a couple of cans of Carlsberg and an inflatable chair shaped like the genie from Aladdin, spending weeks exploring this haunted place. I was in an unhappy relationship at the time, so Rapture provided a perfect place to go where I didn’t have to worry about all that shit. Yet rather than taking the traditional game role, an activity with an absence of thought and an emphasis on muscle memory, BioShock gave me things to think about besides which weapon and plasmids to use.

It had a real story: interesting, twisting, meandering story with an outrageous (but just about plausible) twist in the middle, that forever changed the words “would you kindly?” Beyond the obvious critique of objectivism – Ed Smith wrote a great piece for Five out of Ten #4 about this, by the way – there was a critique of all the games I’d grown up with, and my attitude towards them. These games were content to blindly follow a model that hadn’t changed much since the late Eighties: one with basic rules, objectives and tropes. BioShock’s stroke of genius was to ask: why do we do what we’re told in games, and what does it say about us as players that we don’t question it?

Of course, none of this blog is telling you anything new. There has been more written about BioShock than I would care to read. It’s the game that spawned a thousand blogs, the game for which Clint Hocking coined the term “ludonarrative dissonance”. But on a personal level, it got me thinking about games. I’d written some terrible freelance ‘reviews’ in high school – long since purged from GameFAQs – but BioShock made me want to write about games because they were worth writing about, not because it was something to pass the time.

I had to write to get the thoughts out of my head and codified, to make sense of what I had played. I joined the student newspaper, encouraged by my friend John Herrman (now at Buzzfeed). I made some of my best friends there. I graduated. Started a blog (you are here). Launched a magazine. And here we are today. Six years that have passed so quickly, and with so much more to do.

For me, BioShock is not just a game changer. It’s a life changer: a turning point that gave me a whole new perspective on life, like when I first read Nineteen Eighty Four or heard my first Bad Religion album. I can divide my life into pre-BioShock and post-BioShock, separated by a moment when my prolonged adolescence of playing videogames gave way to trying to understand videogames instead.

The exciting part is that there is so much understanding left to do.