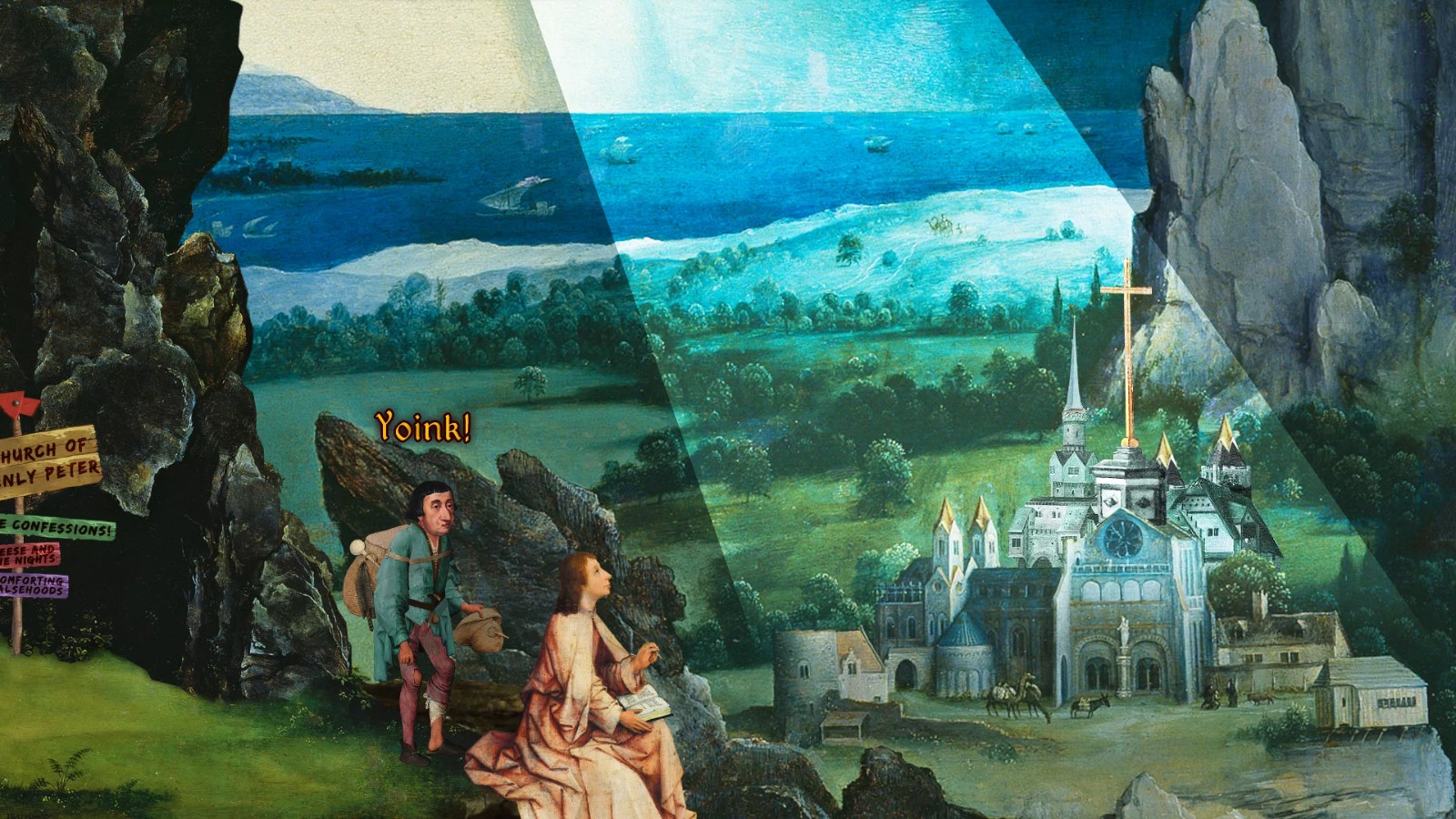 Four Last Things angers me. There’s a deep fury inside me when I see a brilliant idea that was in everyone’s reach (including my own) but then someone else (who wasn’t me) comes along with the vision to make it a reality. A point-and-click adventure game made using public domain Renaissance paintings in the Monty Python-style of animation… and it’s funny. It makes me sick, you know?

I urge you to watch the above video which sets the game’s scene, tone and quality much better than the description that follows this colon: You play a creepy little man who has a bad dream about an apple and runs to the church to beg forgiveness for his many sins. Due to some inter-church bureaucracy (the Monty Python influence runs deep) he is forced to repeat his sins. And by him, I mean you. You must commit the seven deadly sins of wrath, lust, envy, gluttony, greed, sloth and pride.

I really could go on and on about how much I love the look of this game. Having stitched together many compositions over the years for Five out of Ten I know that simply starting with high quality assets does not a high quality composition make. There’s an artistry in how Joe has warped and crafted the vibrant scenes and the characters in a few jerky animated frames exude more, well, character than many other big budget adventure games. The diegetic soundscape provided by musicians in each scene is equally inspired, if a little repetitive after a while.

While there’s charm in the visuals there’s genius in the design. The cleverness of challenging the player to commit the seven deadly sins is that it breaks the conventional adventure game trope of “collect me these items three” in order to proceed. I assumed by the name Four Last Things I was going to be tasked with collecting four things. Instead of pixel hunting and combining random objects, I was freed to be more inventive in how to commit the sins and less concerned with what I needed in order to do so.

The puzzles themselves are nice, short and self-contained thanks to the restraint of only including a handful of locales. To any one not well versed in adventure games this probably reads as a criticism but it avoids the common pitfalls of the genre. Get in, make some jokes, point some clicks, get out; that’s what I came for and that’s what I got. For those wanting a long adventure game that equally eschews conventions I direct you to my review of Sam and Max: The Devil’s Playhouse.

I like short games like this that have a few clever ideas and execute them perfectly. There was nothing included that was unnecessary or bloated or repetitive. The only item I picked up in Four Last Things that I didn’t use was a raw fish.

Goddamn you and your brilliance, Joe Richardson. That fish was probably a red herring, wasn’t it?