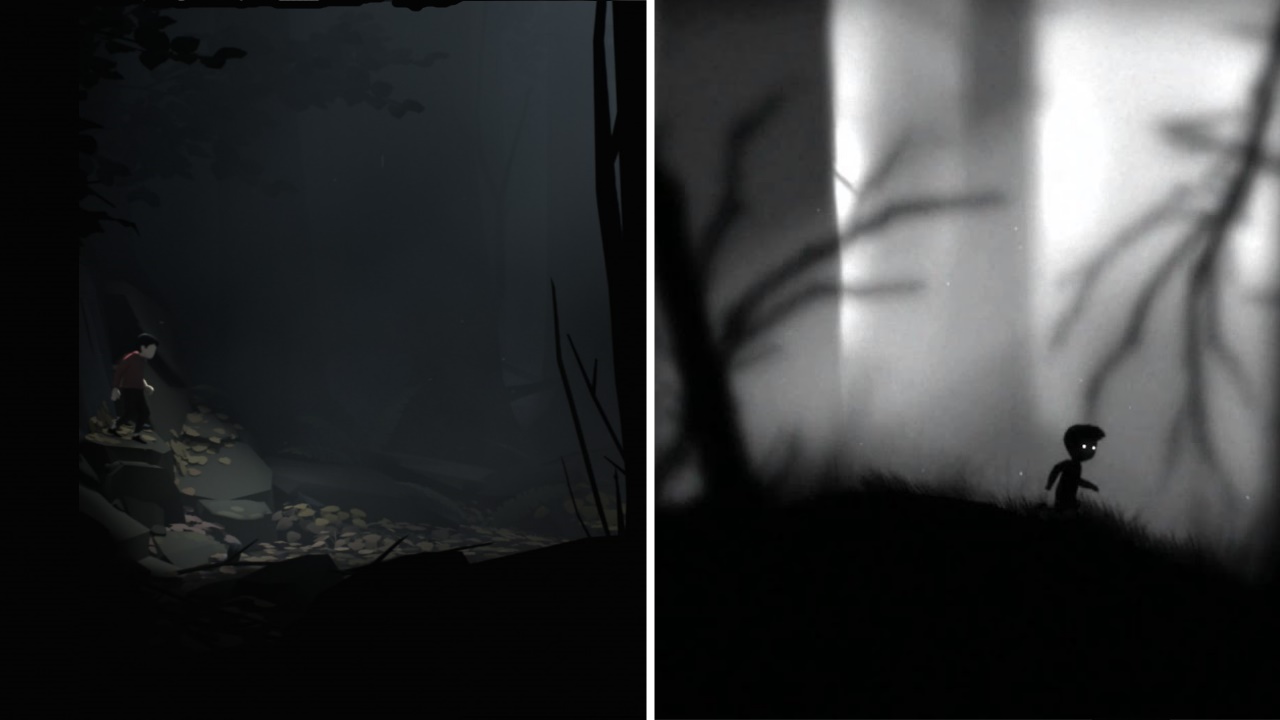 Though it’s an evolution more than a revolution. Where Limbo was style over substance, Inside has something more substantial at its core. I just don’t know what the core is made from.

First, let’s talk about puzzles. Both games are puzzle platformers but for as deep as their moody environments suggest, their puzzles are shallow. Perversely, I prefer Limbo‘s puzzles despite them being more flawed. The flaw being the lethal design of the puzzles. Take the puzzle of a hidden bear trap. Well, you only know it’s a puzzle after the snap and the sight of your shins shooting off in front of you. Then you reload before the trap and know you need to figure out how to safely platform past. Cheap and common are these sorts of traps in Limbo. For all that pain, they were solid “stumpers”, requiring mental and physical gymnastics to overcome and proceed. Actual puzzles to be solved.

Inside‘s puzzles are out in the open and rarely need you to fail to understand how to succeed. Sadly, the majority of puzzles are simple “order of operation” puzzles i.e. there are three buttons in this area, press the three buttons in correct order to proceed. Sometimes it’s flips and pulleys, or it’s moving boxes around, or mind-controlling other characters, but they all function as buttons nonetheless. The puzzles rarely presented any solutions that garnered a eureka moment.

That isn’t to say Inside isn’t a challenging game. Puzzles can still be lethal. Here they take the form of precisely timed challenges. Armed guards, ravenous dogs and unsettling, underwater creatures hunt you down and with no means to attack them directly, you must escape. There are many perilous chase sections with many a leap of faith across gaping chasms to escape. By design, these escapes are by the skin of your teeth. That is, providing you nail the timing.

Inside, like Limbo, punishes failure. Hesitate a fraction and you fail. All a matter of milliseconds is the difference between leaping from a cliff edge to escape the pursuing rabid dog and said dog chowing down on tasty boy chops from a cliffside view. But when it works, it works. These heart-stopping chases had me twisting in full-body wretches, hands clutching my Steam controller so tightly it could evaporate into mist. When it doesn’t work, well, at least there’s plenty of checkpoints.

Though what will stay with me is Inside‘s storytelling.

Eery, sterile, forlorn, mysterious, grotesque, oppressive, melancholic, bizarre: there aren’t enough words to capture Inside‘s atmosphere. Yes, the journey takes us through the likes of a forest, the outskirts of the city, an inner-city and various industrial complexes but each location is expressed with a deft aesthetic that breathes new life to these familiar environments. RockPaperShotgun‘s interview with the developer outlines a  development approach of continuous iteration with a principal focus on the artistry involved. The results are indeed pieces of art.

There is a mindfulness to playing Inside. I had the same feeling playing Gorogoa. Except where Gorogoa is light, Inside is dark. As mentioned, you control a boy under constant threat. The people and places are rarely friendly and the mystery of the world draws you in and motivates your exploration in search of relief and answers. It’s one thing to create ambiguity and to maintain intrigue throughout the experience. It’s another thing entirely to do it wordlessly. Inside the Wordlessness

Wordless performances ruin me. I’m obsessed with the magicians Penn and Teller, the latter performs without speaking. Watch his performance of the trick ‘Shadows’:

For me, this style of performance is captivating on an internal level. I become aware of my breathing. I become aware of the silence in the room. I played Inside wearing my good headphones and I was aware of my heartbeat. It was a mindful experience and after each play session, I left feeling I had re-emerged from swimming in crisp, clear waters.

Inside‘s dystopian world says little and conjures up many questions. And this is perhaps the real puzzle to Inside: what does it all mean?

There’s a fine line between ambiguous story and underwritten nonsense. Inside is absolutely the former, but that doesn’t stop terrible analysis being applied to both. Critiques of Braid, a similarly ambiguous game, were fraught with terrible takes responding to one element of the experience and ignoring everything else. Google is full of takes that Braid is about the development of the atom bomb, which it is not. I don’t know the correct term for these incorrect diagnoses but I call them ‘partial readings’.

The ending to Inside is bonkers. There is a shift in game mechanics and characterisation that takes the experience into a grotesque experience that would make David Cronenberg smile. It too made me smile in wonder. Then I rushed off and devoured any “ending explained” analysis I could find. And I found a lot of partial readings.

In this respect, I ruined the experience for myself, at least the experience of mulling over the game after finishing playing. In this way, I’ve been reflecting since playing The Witness for over a year now. For this reason, I’ve been vague on the details of the story in writing this article.

There is a literal story of a boy emerging from a forest and infiltrating a city of oppressed workers run by some dystopian oppressors. It’s a tale told in the background as much as it’s told in the foreground action.

One of the theories I read online relates to the bigger metaphor of Inside and what it represents symbolically. It’s a fun one, if depressing, but too good not to share.

With that in mind, I’ve written two conclusions to this article.

Inside is very good and you should play it. See all of the above.

Inside is very good and is a powerful representation of cancer. I saw this theory on Reddit and the more I think about it the more I love Inside. Some of the key symbolisms in the game are:

Looking at the game through this lens, Inside‘s world is one of beautiful sadness and loss, cruelty in some ways direct and others indirect. It’s what it can feel like watching someone you love succumb to an illness, some disease, some unknown entity that travels through their body, from left to right, with the body defending itself and attacking the intruder.

Sometimes it works. Sometimes it doesn’t. One of these things will die. The other will survive. In time, both will die.

That’s just the cruel nature of what happens inside.