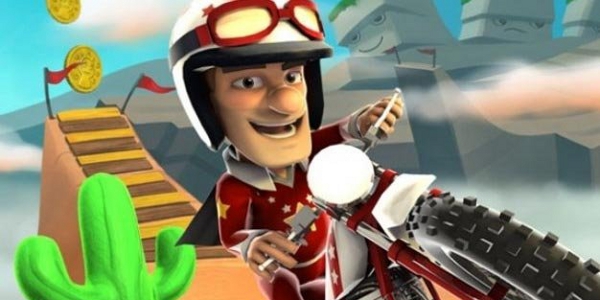 Modern video games offer two strata of challenge: either no skill is required and sitting on the controller is enough to win (any Wii game on display in Tesco falls into this category), or the game is aimed at masochists. “PREPARE TO DIE”, reads the advertising for recent player-corpse-fest Dark Souls. I was playing Halo Anniversary over Christmas on ‘Legendary’ difficulty, which boasts “this is suicide”: thrilling to play with a friend, but draining in large doses. It makes me wonder if in ten years you’ll have to munch a glass bottle in front of the Kinect sensor to get to the next level.

One such challenge is Trials HD, a motocross game as difficult as performing open heart surgery in a runaway mine cart while bats feast on the patient’s arteries. It’s so hard, I can’t get over the first obstacle on later stages without exploding every bone in the rider’s body. While mastering such a tough game is rewarding, what happens if you don’t have the required levels of patience or skill? Is it in developers’ best interests to limit who can play the game? Joe Danger takes the opposite approach to a similar goal: it’s tough, but it puts the fun first.

Joe is a cartoon Evel Knievel, getting back in the saddle to prove his worth with a series of increasingly crazy challenges. There are buses and shark-infested tanks to jump, mysterious floating stars to collect and races to win. Challenge grows organically from attempting greater feats of skill: beginners can enjoy negotiating obstacles and barely surviving, while experts will be pulling a Superman through a flaming hoop and stretching to collect the suspended D A N G E R letters. The best challenges are the ones you start to create for yourself. Can you land a third backflip off that ramp, or chain a combo throughout the whole level?

Joe’s two-wheeled death mobile controls with chunky responsiveness. He snaps in and out of positions, so you’re always clear when he is engaged in a stunt and when he is not. That’s important, because it’s a key factor in alleviating frustration. You know where you stand with Joe: usually millimetres away from crashing and restarting the stage, but when you crash it’s your fault and not that of a sadistic stage designer. Unlike Trials you’ll rarely struggle to finish a stage, but you definitely won’t be earning one of the elusive Pro Medals- awarded for clearing every goal in a single run- until you’re sufficiently skilled. It’s simple enough that you can confidently hand the controller to anyone and know they’ll have fun, with a charming style that will encourage them to steal said controller out of your hand without invitation. Thanks to some well-placed slapstick, you’ll wince and laugh as Joe crashes into a barrier or crushes his testes on the side of a fish tank. Generously placed checkpoints aid novice players, retaining whatever trinkets Joe has collected you can finish a goal without restarting the level.

Joe Danger’s career is, like the tracks he drives along, a linear journey. What makes it more interesting for the dedicated gamer (and deserving of the ’Special Edition’ moniker) are a series of hardcore levels in The Lab. These serve to teach you some of the more nuanced features of the game before testing your mettle with an ever-expanding gauntlet. No sooner have you mastered a corridor of mousetraps than a series of spiked jumps are bolted onto the end that seem impossible. No sooner have you cleared the spike traps when the serpentine hellmouth extends ever further. You might have noticed the ambiguity of the preceding sentence because I haven’t cleared the second stage yet, but I know that I can do it, which is more important. When you feel like you’ll never succeed, there’s no incentive to keep trying. When you feel like victory is within your grasp, it’s the stuff of all-night marathon sessions.

Truth be told, Joe Danger is almost as difficult as Trials: but it isn’t half as irritating when you fail, because you can always play on for a higher score or to find a new secret. When it’s hard, it’s really hard. But as any old-aged lothario will tell you, it doesn’t have to be hard to be fun. If the standard levels prove too stressful, you can build your own wild courses and share them with your friends.

I like games to be relaxing. I want- perhaps need – to be able to pick up and play them without having to crack out a manual. I’ve got a copy of Deus Ex: Human Revolution sitting under the television that I’ll need to restart because its only mistake was to come out in the same year as Skyrim. To return to it after a few hours play is like being dumped halfway up a mountain and told to get climbing.

Playing Joe Danger is like scaling a mountain range, too: it looks daunting from sea level, and some nutter will try and run straight for every summit in a day, but it’s more natural and enjoyable to take your time and enjoy the sights.