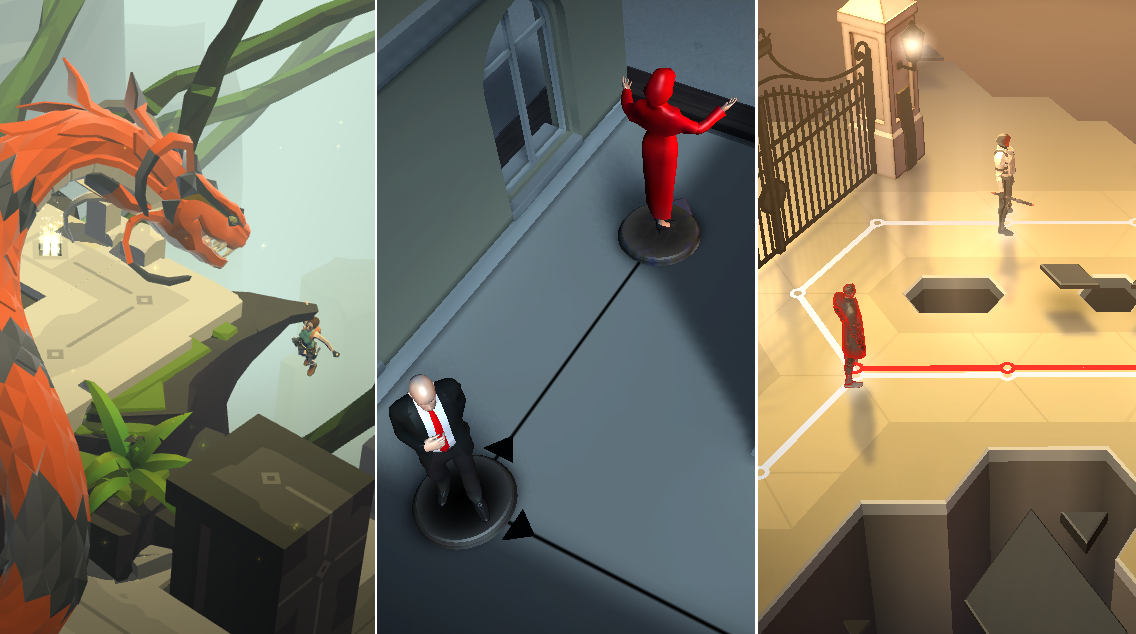 Ok so I’m going to reference the notes/screenshots I jotted down while playing these games (formatted in fancy borders):

Can you tell I once had a news internship at The Herald with such high quality notes as those? I played The GO Trilogy on iPhone in order of best (Lara Croft GO) to worst (Hitman GO) to middling (Deus Ex GO). It all started on a flight of fancy when I bought Lara Croft GO for £4.99. Later, much later, I discovered I could complete the bundle for free. FREE. ON AN IPHONE. IN 2018. 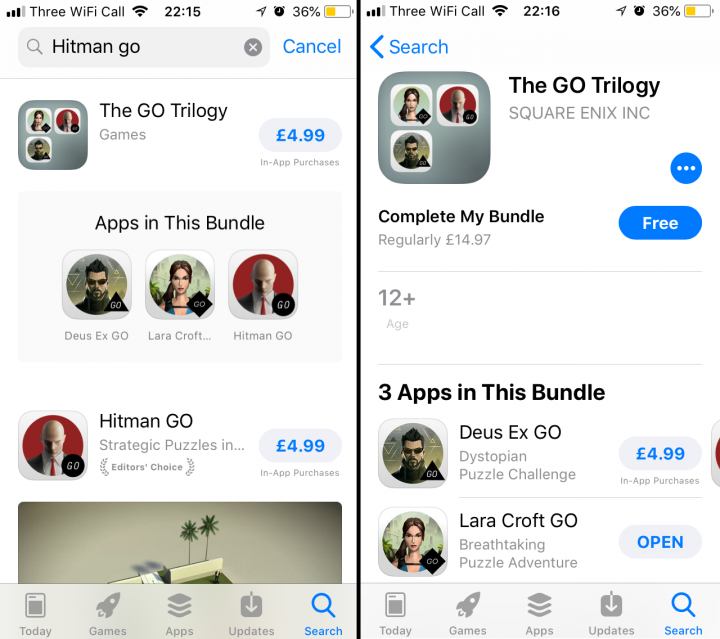 My note refers to the games as Sokoban but it’s more accurate to call them TPGTPOOAGOT&CTEOFTSQWs (Turn-based Puzzle Games That Play Out On A Grid Of Tiles & Captures The Essence Of The Series Quite Well). Incidentally that acronym is a taster of what happens when you let Alan set the password for the Split Screen Twitter account.

Of the GO Trilogy, Lara Croft GO is the GO game you should go play. It vividly captures what I remember feeling like when playing as Lara Croft back in the old PlayStation Tomb Raider games; Orthogonal, rigid movements between right-angled traps and snake pits that somehow flows smoothly. The puzzles were great and not always immediately obvious how to solve (unlike two other GO games I won’t mention in this paragraph).

Despite the flattened textures and fixed camera perspective, Lara Croft GO weaves in a few cinematic moments that I still remember more than 7 months later. In a future Draft Pick I’ll explain why it fully embodies the true spirit of Lara Croft that the rebooted Tomb Raider (2013) captured only in brief moments.

Hitman Go (2014)
Painful when mistakes are made. Medals unlock levels. Progression repeat. Probably the weakest puzzles of the three games. Totally brutal if you make a mistake because you need to restart the level and repeat the dozens of steps to get back to where you were.

Where Lara Croft GO features an animated character, Hitman GO transforms the silent assassin into matte statues. It similarly oozes style, capturing the chess-like assassination scenarios of the Hitman series. It bungles the mission though and shoots itself in the foot with god awful puzzles.

Because the puzzles all centre around movement on a grid that has limited options for moving, the solution to the puzzles fall into two camps: You either do the opposite of what seems blatantly obvious or it’s a long sequence of moves waiting for enemies to “tick tock” around the clockwork puzzles as time slows down to a crawl. The levels become memory tests on executing difficult solutions to easy puzzles.

I can’t emphasise how long it takes to complete some of these levels. Lara Croft GO is often short and sweet. Hitman GO is long and sour. Look, one of the level challenges tasks you to complete it in 37 turns or fewer. 37?! In a row?! I’ve never done anything in my life that took more than 37 turns. And remember that’s 37 turns that you will commit to memory because all it takes is one mis-swipe and you’ve failed the level and you’re back at turn 1.  There is no way to undo a turn.

Advanced features but with a freemium snag. The fanciest graphics and a battery killer for my iPhone SE. Decent puzzles although they shoehorn in a story with flat cutscenes and everything. They introduce an Undo button but tether it to limited uses before you need to spend real money.

Obvious solution is booby trapped. Essentially looking for the second most obvious solution. Once you train your eye to acknowledge but ignore the obvious path many of the puzzles become utterly trivial. Difference between puzzles that teach problem and those that obscure solution.

Then Deus Ex GO tries to make you pay more money in order to use the Undo Turn button more than a few times. -500 Craig Points.

However Deus Ex Go does use a triangular grid well to come up with fun evading/hacking/attacking levels. +1000 Craig Points.

Although Deus Ex Go will drain your iPhone battery so fast and so hard that the phone physically becomes too hot to hold. +250 Craig Points.

Still Deus Ex Go has a few puzzles that genuinely stumped me without being unfair. +250 Craig Points.

Except Deus Ex Go has more puzzles in the same vein as Hitman GO that involve not falling for an obvious “booby trapped” solution. Once you spot this pattern it renders many levels meaningless. -300 Craig Points.

All that being said, I don’t remember finishing Deus Ex Go’s story before I deleted it from my iPhone. So that makes the story doubly unmemorable. -50 Craig Points.

When converted into a final opinion that number of Craig Points wins you the sentence: “Go play Lara Croft Go and don’t bother with Deus Ex GO or Hitman GO unless you also snag the free bundle offer”.