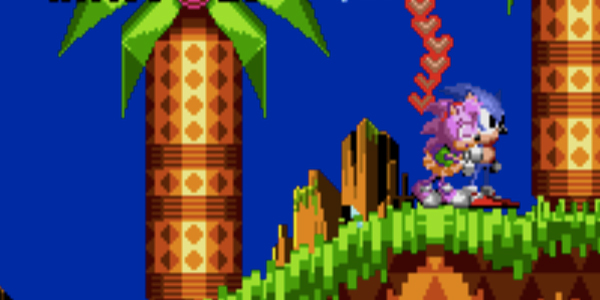 Games never taught me anything about love. If they had, I wouldn’t be writing this: I’d be penning my latest Love Doctor column for a national newspaper, imparting wisdom based on years of experience with electronic romance. Alas, that career was not to be.

It’s hard to imagine a medium that is less concerned with love than gaming: in films, music, art and literature, we take it for granted that it’s going to receive a mention. Although most people are probably sick of Adele by now, you have to admit that if the album 21 were penned in response to a mediocre Pokémon collectathon, it would lose some of its appeal. Even the most tedious dance music imaginable will inevitably be about love, or heavy petting at the very least. Great artistic works don’t have to be about falling in love, but they do have passion. They excite and inspire us. They teach us something about ourselves.

When was the last time a game taught you anything? Maybe one of the reasons why gaming is still in its artistic infancy is because of the trivial approach it takes to relationships. In Mass Effect, the impetus for forming a relationship with a crew member is the achievement you unlock after sleeping with them. It doesn’t actually change the story: it’s no more an event than giving a trader a lost artefact in return for bonus credits, but it damn well should be. It distils love to a series of correct responses in a dialogue tree, leading to mechanical intercourse and a +5 bonus to Confidence. Mission Accomplished. Who on Earth (or any other planet) would be moved by such an infantile approach to relationships?

At least Mass Effect handles the matter better than Prince of Persia: The Sands of Time, an outstanding game let down by the awful love subplot shoehorned into its story. If you actually could form a relationship with a girl by chasing them through crumbling ruins, with the occasional sarcastic exchange, my childhood games of Tag while growing up in Northern Ireland would have been a lot more fun. Games treat relationships as the natural consequence of being in mere proximity to a member of the opposite sex. To my knowledge, the only games that have treated relationships with any degree of realism are Jason Rohrer’s Passage and Rod Humble’s The Marriage. Yet in those games, love doesn’t get a mention. They deal with the mechanics of relationships, but not the reasons why those relationships form in the first place- which are significantly more important!

The Fable series claims to place a high value on human relationships, but the way in which these relationships are built is so perfunctory that I wonder why Lionhead even bothered. To woo the man or woman or your dreams, press the flirt button a few times to raise their love meter, then give them a wedding ring. Depending on your character’s level of attractiveness, whole swathes of people will throw themselves at your feet as you enter town. Once you’re married, nothing really changes: as long as you provide enough financial maintenance for your ‘family’, you’re free to do whatever you like.

Fable II killed off your family at one point in the story. I chose to bring them back, because it was the only way to return my beloved dog Sausages. I formed a bond with my canine companion and not my wife because it was the dog who mattered. My wife wasn’t fighting hobbes and trolls with me, didn’t spot hidden treasure chests, didn’t develop a friendship based on mutual respect. If you wouldn’t marry someone without first building a relationship in real life, why would you be compelled to do it in a game? Games increasingly include sex and marriage as a concession to ‘realism’, even when their existence breaks the game’s internal reality. You can marry in Skyrim by equipping a love amulet (seriously) and randomly propositioning characters until one accepts. I married a woman named Ysolda from Whiterun: our sham marriage, with its sycophantic well-wishers, left a bitter taste in my mouth. Then I went off to hunt dragons and she went off to do whatever it is she did. Our vows to remain faithful to each other didn’t stop me from burgling her house when instructed by the Thieves’ Guild. If the Dark Brotherhood asked me to murder her, I probably would.

It would have been much more interesting if, after thirty game hours of non contact, she’d approached me at home when I was stuffing a chest with precious stones and dragon scales:

“Dragonborn, you make me feel unloved and unwanted. I haven’t seen you in days. You come in at all hours, smelling of entrails and dripping blood all over the carpet, making me wonder where the dragon blood ends and the dark elf begins. I want a divorce. Oh, and I’m taking your collection of enchanted war axes”.

Lost Odyssey, one of my favourite games of this generation, actually crafts quite a convincing portrayal of love. Jansen and Ming’s relationship evolves from unrequited lust to reciprocal love over the course of four discs, many long cut-scenes and some dubious voice acting. It works because their relationship is given time to develop, not thrust upon the player as a five minute diversion from slaying monsters. Yet because Jansen and Ming are members of a party of heroes and not the sole focus of our attention, we don’t impart the same degree of agency over their actions, which makes the romance more convincing. Whenever the player controls a single character, it requires more nuance from the director when folding relationships into the story.

Even in Shenmue, one of the few games that has ever moved me emotionally, Ryo’s relationship with Nozomi is heard in whispers but never convincingly conveyed. There’s clearly meant to be a ‘thing’ going on between them, but whether as a consequence of the animation and voice acting or the Dreamcast’s hardware limitations, their scenes together were like watching two robots awkwardly and coldly embracing. That’s because they essentially were two robots awkwardly embracing, but I know from Wall-E that robots hugging can actually be heartwarming. Why does Shenmue fail where Wall-E succeeds? I don’t believe that the barriers are technological: they are conceptual. It’s the difference between Mickey staring longingly at Minnie with admiration and endearment, and Amy Rose flailing after Sonic with cartoon hearts bubbling from her head.

I don’t think love is an unbroachable subject for games: rather, it’s merely one example of gaming’s inability to handle any story with maturity. Great stories hinge on concepts that have enthralled humanity since we diverged from chimps- love, death, suffering, spirituality, empathy, achievement- but games treat these as trivial checkboxes on a path towards the credit roll. If you’ve been having sex to regenerate your health (?) in God of War, why would you be interested in an real relationship? If you’ve spent ten hours murdering countless civilians in Grand Theft Auto, why would you be moved by the death of a person you knew a little better? What’s the difference between the death of your character in Call of Duty revoked by a quick reload of the last checkpoint, and a ‘permanent’ death whenever the story calls for it? What counts as personal attainment when your character is literally the most skilled and incredible person who has ever lived? The problem is in the framing: because games continue to treat these issues trivially, we can’t help but treat their stories and characters as trivial.

If you want a take home anecdote on how games treat love, consider the Mega Drive classic Tiny Toon Adventures: in the last level, Buster Bunny is chased by Elmyra and has to escape being snuggled to death. In games, love isn’t a force of nature: it is an obstacle to overcome or just another achievement to unlock.