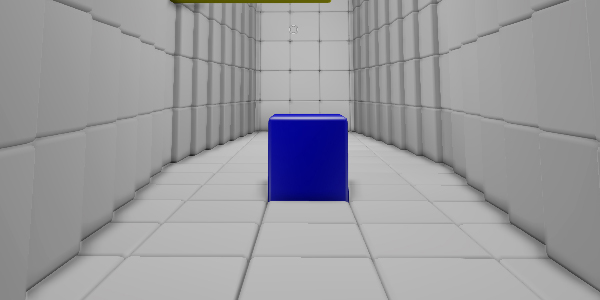 Quite Understated But Engaging.

As a first-person puzzle solver Q.U.B.E. can only ever follow in Portal‘s footsteps. As an FPPS set in an underground science laboratory, with white puzzle rooms connected by self-assembling hallways, Q.U.B.E. walks about as close behind Portal as comfortably possible without leaping on its shoulders and pelting us with cake. The question then is whether Q.U.B.E. overtakes the household name and shows us something new.

The answer to that is no. Q.U.B.E. is a bare bones puzzler with none of the frills of Aperture Science: No voice over the PAs, no graffiti, no sneaking behind panels or accompanying audio spheres preloaded with The Ricky Gervais Podcast.

What remains then are puzzles more satisfying than Portal 2, as genuinely engaging as Portal, and a sense of scale and progression that makes it its own. Q.U.B.E. doesn’t say very much and so it doesn’t say anything wrong.

Because there’s no fluff around the puzzles Q.U.B.E. is focussed like a flash game. Part of the min spec for reading Split Screen is an awareness of The Incredible Machine and Fantastic Contraption. Imagine those sequential block-based puzzles scaled up to the size of buildings. Now imagine within these great spaces walls pirouetting and columns rising at your command. Now imagine that made out of polystyrene Minecraft blocks. That’s close to Q.U.B.E..

Finally imagine those puzzles being very clever. Not clever in a physics-based yet physics-defying brain-melting sort of way. Using four or so different colour blocks to raise, jump and flip spheres into pits or simply getting to the other side of the room is often the goal. But it’s the way the three man team of Toxic Games build just enough complexity into each subsequent puzzle that is the crowning achievement. Not many games get the balance of challenge over increasing difficulty as consistently right as Q.U.B.E.. I encountered no sudden difficulty spikes puncturing my enthusiasm and had no flat plateaus to muster through.

While it does brush up against many of the environmental narrative tricks of that hole-making game that Valve made (name escapes me), Q.U.B.E. has some of its own memorable moments. And it does it with the lights out.

I won’t forget the moment when the lights turn out in Q.U.B.E.. Jet black everywhere except for the glow of the primary colour blocks. Like a laser burning bright blue this sequence is burned into my mind’s eye.

And it’s your mind’s eye which you’ll need to solve these black-out puzzles. The coloured blocks light up one at a time and only when in use. You can’t step back to take everything in. So you need to visualise ahead. I recently sold my MRI machine but if I still had it I’m sure it would show a new section of my brain firing up. The part that solves puzzles blindfolded without getting frustrated.

I’ve finished my intellectual points so I can end by saying that the whole section looks like a big, nerdy rave.

There was a moment in a room when I heard footsteps that weren’t my own. Was someone else escaping? Are they coming for me? Are they friendly? I don’t have a gun. Should I be running? Is this it? Is this the first glimpse behind the walls? Is it all about to kick off?

Nope. Sound glitch. But for those few minutes I felt the same giddy discovery I had in Portal. Q.U.B.E. is not that game. But it’s very close indeed.