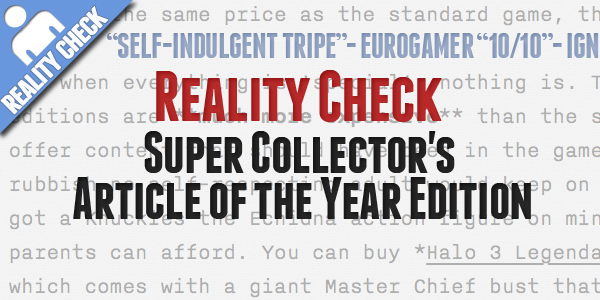 Everything has a special edition these days, so we thought we would get with the times. This is Reality Check: Super Collector’s Article of the Year Edition! We’ve packed a huge amount of bonus content into this feature to continue the Reality Check experience long after you’ve finished reading. Listen to the soundtrack, treat your computer to a makeover with some wallpaper and watch the exclusive ‘Behind the Screens’ video. Thanks for pre-ordering this article… wait. You did pre-order it, right?

A game is no longer special enough without releasing a special edition as well. The Crysis 3 announcement was accompanied by the ‘Hunter Edition’. You mean to tell me that at no point in the development process did someone say: “maybe this content would, you know, be better in everyone’s game?” Special editions aren’t about specialty. They are mere upselling: a con artist selling you extra rubbish you don’t actually need, like a phone ‘screen protector’ that micro-bubbles your screen and makes it more suspectible to scratches. Once, someone tried to sell me DS insurance: I think I will die before my DS does.

By the time you’ve read your Collectors Edition strategy guide (printed on real Egyptian papyrus, embossed cover hand-whittled from mahogany), changed into your pre-order t-shirt and played the iOS tie-in app, you might even have time to play the game as well. All those bonus costumes and avatar items melt away into the digital void: you won’t even remember that you purchased them, and you’ll never lament their absence if they were never there in the first place.

I tried to find where this trend started, but all I could find was an ambiguous list on Wikipedia. There’s nothing wrong with producing a game that’s especially collectable: the first production of The Legend of Zelda came on a gold cartridge, and I own a 10th Anniversary Collectors Edition of Sonic Adventure 2. It used to be the case that you could pre-order a special edition of the game which cost the same as the standard version, like my copy of Doom 3 that has the original Doom included. If you can get a bonus soundtrack or behind the scenes DVD for the same price as the standard game, then go for it.

Yet when everything is ‘special’, nothing is. These special editions are much more expensive than the standard games and offer content that should have been in the game, or plastic rubbish no self-respecting adult would keep on a shelf (and I’ve got a Knuckles the Echidna action figure on mine) and no child’s parents can afford. You can buy Halo 3 Legendary Edition, which comes with a giant Master Chief bust that you can’t wear as a real helmet. Why fill it with discs and art books when you could be filling it with your own head? Or why not splash out on Modern Warfare 2: I Don’t Believe It Actually Comes With Night Vision Goggles Please Tell Me You’re Joking Edition. My brother buys all this collectors crap: he doesn’t even put it on display, it just litters the upper floor of the house. I know he reads Split Screen, so Paul: stop buying all this junk! Play that copy of Dark Souls I bought you for your birthday instead of reading inconsequential lore or playing with a fake doll from a fake world! I’m worried that after this week’s column is published, I’ll be found dead with an Arkham Asylum Limited Collectors Batarang lodged in my chest.

No discussion of insidious gaming marketing would be complete with mentioning ‘Game of the Year’ re-releases. Game of the Year editions are actually quite good: they’re a great way of bundling downloadable content that would otherwise cost extra. I never got around to playing Red Dead Redemption, but when I do that GotY edition is going to be a sensible purchase.

Yet I object to the use of the term ‘Game of the Year’ for games that are definitely not the best of the year. What’s wrong with ‘Director’s Cut’, ‘Ultimate Edition’ or ‘Platinum’? Looking back at 2011, unless you’re Portal 2, Skyrim or Skyward Sword, you probably weren’t the best game of the year- and that’s OK! Most books I read are not the best book of all time and most albums won’t receive a hallowed five stars in my iTunes library, but I still love them.

Publishers are playing the role of an overachieving parent, making up awards for their children, then demanding we all acknowledge these imaginary accolades. It’s as crass as buying your mum a “Best Mum in the World” card for Mother’s Day when you know that some mothers have died for their children. I’m sure your Mum makes fantastic pancakes, but you need to have some perspective. Whenever a publisher can release Dead Island: Game of the Year Edition with a straight face, you know something is rotten besides the zombies. Are your relatives really going to be fooled when Christmas shopping if every single game claims to be the Game of the Year? Not everyone is getting it wrong: CDProjekt should be commended for The Witcher 2 Enhanced Edition, which not only contains tangible enhancements, but was extended to everyone who had previously bought the game for free.

Publishers need to realise that selling a game is about more than shifting product from a warehouse: they should build a relationship with the player, patch any bugs in their games’ code, and treat the player with respect that’s often lacking. Well-respected developers like Valve, Mojang and CDProjekt give back to their fans, and they are rewarded with repeat business. Larger publishers like Activision, EA and Microsoft increasingly treat their customers with contempt. There are even rumours Microsoft are going to create a third tier of Xbox Live, a second gluttonous layer of icing on the money cake.

It’s just not good enough to call everything ‘special’, dividing pre-order bonuses across multiple retailers, releasing ‘Game of the Year’ editions for mediocre titles and expecting us to swallow it. You know what’s really special? Playing a great game. Those are worth collecting.

Download the Reality Check Desktop Wallpaper Pack and send in a screenshot of your desktop for the chance to show off your desktop to the world!