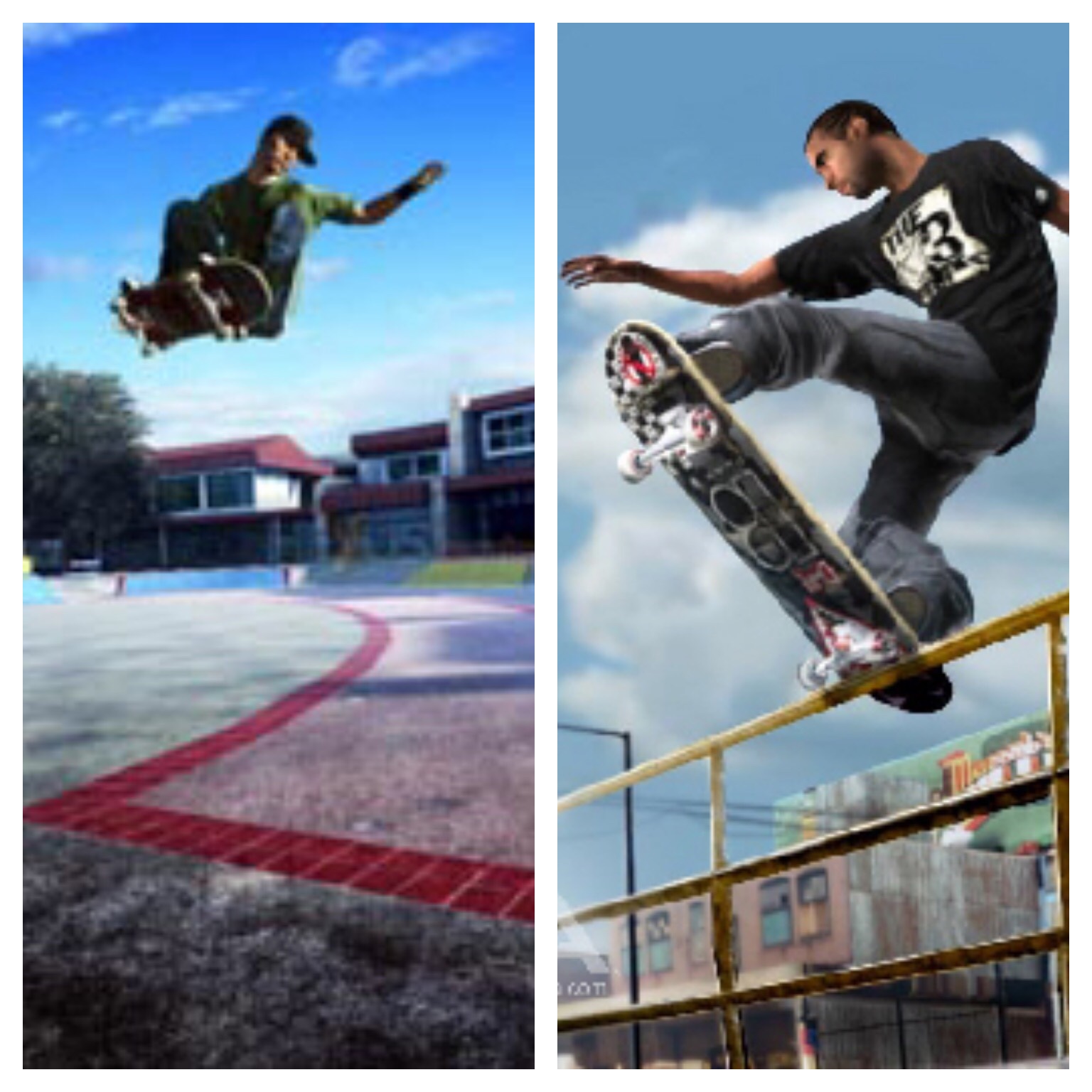 Grind without the grind.

It wasn’t Skate that killed off the Tony Hawk franchise. That final deathblow was surely delivered when Activision released the skateboard controller. Financially speaking, it might as well have been shaped like a coffin.

As the monopoly in the marketplace Tony was subject to his own escalating ridiculousness. Compounded by annual sequels the once humble skate-around-and-do-tricks game was rendered meaningless by its own stupid inflation. I defer to Wikipedia’s finest in communicating its follies.

The crucial difference between Tony Hawks and Skate was the switch from buttons to sticks. Gone were the prolonged button-mashing, multi-trick combos in place of sweeping gestures of the analog stick. Pull back on the stick to crouch down, flick it forward to jump, wiggle it in ways to do flips and grabs.

And like when going from Street Fighter to Fight Night this crucially introduced the physicality and weight I hadn’t realized was missing all those years.

There’s ebb and flow as you duck and go around town, cruising two-inches above concrete, until you pop that ollie and maybe land on the rail. You might not land many at first as there’s no magnetic lock-on hidden behind the wheels to snap your board to the rails and ledges. If the angle is off or the timing is out then you spill, pick yourself up and try again.

Wait a minute. That sounds like learning. EA Black Box made a stripped-down game about learning to skate. The most interesting thing about Skate is this learning curve is not stepped with incremental, arbitrary rewards. It stands defiantly alone in what future historians will surely refer to as The Age of the Unlock: do some stuff, fill a bar, unlock new stuff, unlock new bars to do more stuff.

Of course, I understand why they do it: it’s a way of creating a sense of progression in games that never really progress. Ranks, levels, bars and unlocks are manufactured page numbers in a story that never changes. And it seems like everyone is intent on telling this lucrative Pavlovian story.

In Skate, the character doesn’t change: the player does. The skater you start with has all available moves at their disposal and can go as fast and jump as high as they ever will.

You, the real life human being, are the one who gets better. You see distances in terms of jumps. You see lines through community centres and the suburbs from just above the back of your board. You’ll soon carve a path through a normal city that just so happens to be ideally sized for waist-high jumps. Your timing will be impeccable.

I say “You” but I mean “I”. I did all this because I invested the time to learn. I always wanted to be a skateboarder but I’m Scottish and there’s already one of those.

I am willing to spend time working a run and then spend as long in the video editor cutting together footage to post online to the EA for no-one to watch. I’m the sort who’ll edit podcasts and videos of himself playing Blade Runner.

Glitch videos get the views. I should just make those. Much-needed structured objectives involve doing specific moves, getting a certain score or racing; it’s not all free skate abandon. It’s a nice loose story about doing tailgrabs for a couple of magazines, getting sponsored and eventually winning the X-Games. It’s there to give you ideas about what’s possible. It’s there to teach.

Sometimes the challenge involves a particular area or allegedly famous skateboarder. Other times you’re sent out to find the best spot to complete a shopping list of tricks. In all cases it’s about looking and seeing a spot, setting down a respawn marker and then the masochistic ritual of skating a line over and over begins. And until the game or yourself are satisfied it can never end.

Online savants discovered how to kickflip the board underneath rails while leaping over the top of them- a trick known as a hippy jump. Eventually, I discovered that difficult challenges can be completed solely by grinding on long, downhill kerbs and that the AI can’t do 720 triple heelflips in HORSE.

These expected improvements were made in Skate 2, where it was now possible to get off the board and walk. No more rolling around the bottom of an empty pool like a sad turtle.

The moveset doubled, ramps and tables could now be moved around as well as fast-tracking between challenges. But the raw essence of the original Skate remained albeit under more horrid menus.

It was sketchy when the sequels starting appearing yearly in a somewhat Hawkish manner. I haven’t played Skate 3 and so don’t know what the next batch of improvements I couldn’t live without are. Even if I did, I’d still recommend the second just for the ability to walk.

And if that doesn’t show you I love the Skate series I don’t know what else to say. In the second game you can walk.