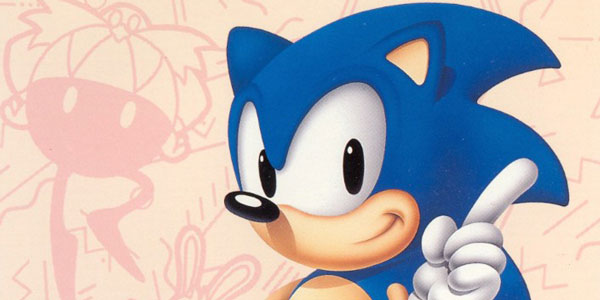 To be this good takes ages.

It’s about cool. It was always about cool. As I thumbed through the pages of an Argos catalogue one fateful Christmas, my eyes fixated on a spiky blue anthropomorphic hedgehog taunting with a wagging finger. He goaded you into begging your parents for a Mega Drive; to see if you had the stones to take up his challenge of perilous adventure across fantastic environs. So, I begged my parents. Well, actually, I begged Santa, but ultimately that turned out to be the same thing.

I had never seen anything so amazing. That’s because I was five and everything from a scar to a kaleidoscope seemed amazing, but regardless, Sonic was something very special. The diamond-cut sharpness and razzmatazz of the art design invited you into an incredible world, its enormity alluded to by the parallax scrolling and the various islands dotted in the background. Playing Sonic now, the stages feel miniscule and linear. I race through them in a path refined for sheer speed to wipe Robotnik’s smug grin from the signpost at the end. Back in the good old days, these were real jungles and caves demanding exploration. Intrigue and treasure lurked behind every waterfall and crack in the landscape. Sometimes you’d find a hidden extra life (who could forget that jingle?) or the sparkly invincibility box, which played the main theme as a victory march; other times you just plummeted off a cliff and died. Yet, you never stopped searching every nook and cranny for something your friends hadn’t spotted.

That said, I was rubbish at it. For someone who couldn’t ride a bicycle without stabilisers at the time, this was some seriously difficult shit- although perhaps my childhood self wouldn’t have phrased it that way. Getting through the game was arduous: even the first level was filled with crumbling ledges, pungee pits, crabs shooting energy bolts from their claws and piranhas leaping from rickety rope bridges. Golden rings dotted around the stages teased you, showing you areas you couldn’t even comprehend reaching. Was it even possible to collect them all? It didn’t seem so. Never mind that any accidents spilled your hard-earned rings all over the place, slowing the action as your console struggled to calculate the underlying physics, and you frantically scrambled to recollect a few before you hit something else and died. Contrary to popular belief, Sonic isn’t about speed: it’s all about the physics, something the recent Sonic 4 got so horribly wrong. Without an understanding of inertia to guide you into rolling Sonic through the loops and half-pipes, he stops dead at the first sight of a slope. While later games added the ‘spin dash’, an extra burst of speed for button-mashers, real speed demons didn’t need it. Some of the biggest thrills came from finding a spring or a pair of power-up shoes and hurtling along at ballistic speeds, carefully timing your jumps to avoid hazards. It’s the point where platform games meet pinball in a beautiful marriage of untamed velocity that’s almost too fast as Sonic outruns even the camera following him; but he dared you to go ever faster, tapping his foot impatiently if you stopped to admire the scenery.

The biggest hazard of all was, of course, Doctor Robotnik and his egg-shaped contraptions that bookended each zone. The first time my Dad and I encountered the swinging ball at the end of Green Hill Zone, we didn’t know how to beat that thing. It was impossible! You’d leap onto the floating platforms to attack Robotnik, only to be mashed against the wall in vain. Worse still, even if you landed a couple of hits, it was never enough to dispatch him. One morning, not long after the aforementioned Christmas, I found a message taped to the bed from my Dad: “I defeated Robotnik and made it to the Marble Zone”. For someone who had never glimpsed beyond those rolling green hills, this was like a message saying “I’ve discovered a door in the back of a wardrobe leading to the Land of Narnia, and they’re giving out free chocolate”. Marble Zone was even harder than Green Hill: fireballs and lava gushing from shifting purple rock, caterpillars that bounced into deadly spiky pieces if you didn’t hit them in just the right spot, crushing platforms on chains tied to intricate pulley systems and a flow of magma I thought I’d never be fast enough to beat. This was a true epic for the times: you didn’t just have ‘levels’ or ‘worlds’, each new stage was an ‘act’, something now reserved for the bombast of Gears of War. We persevered, from each unique zone to the next: the Spring Yard with its pachinko pits and boss that ripped the feet right from under you, Labyrinth that’s probably responsible for my lack of swimming confidence after Sonic drowned in the flooded murk on countless occasions, Star Light and that lovely music, insanely-named Scrap Brain and its ultimate punishment as you fell back into the Labyrinth Zone again right at the end of the game. Upon completion, the credits rolled and faded to a screen with Robotnik juggling the hidden Chaos Emeralds you’d failed to collect. He laughs at your failure to stop him. You’re a loser. “Try again”. What a dick.

I tried again. I tried so many times that the layouts of each level are permanently etched into my memory. I scrambled Robotnik and recovered every last one of those stinking emeralds from their orbital prisons. Then I played another game, and another: twenty years later, and I’m writing this, wondering where it all went wrong.

I’ve often wondered if you teleported back to the Fifties with a copy of Gears of War, whether people would mistake it for a real life apocalypse and run away in terror. Sonic was so much better than real life. It’s just an incredible video game: so fun, so bursting with life and raw attitude, that it compels you to pick it up and play. While you could argue that Super Mario World is a better-crafted experience (and, although I am wont to admit it, you’d probably be right) Sonic has the edge in instant gratification. You always feel in perfect control of Sonic. He is the digital manifestation of your mind. I’m sorry if that sounds pretentious, but it’s true. Every Sonic feature inevitably refers to Mario, because the character was created to be Mario’s opposite. Sonic was the sledgehammer in Ridley Scott’s 1984 Macintosh advert, cannonballing through a totalitarian Nintendo future. He was fast and had an attitude; Mario was more leisurely and affable. Mario collected coins and augmented his strength with Fire Flowers and Mushrooms; Sonic collected rings and managed to get by with his buzz saw-like abilities. Sonic was explicitly designed to show off the technical prowess of the Mega Drive and show up the ageing NES: it’s been said that the iconic “SEEEGGGAA” chant takes up one eighth of the entire cartridge memory. Sonic was always doomed to live in Mario’s shadow, because that’s how his creators chose to define him. You couldn’t have Sonic without Mario, but Mario wouldn’t have been as popular as he is now without that famous rivalry.

It’s not possible for someone to play Sonic today and understand why I’m so fond of it, in the same way that I can’t understand a Nintendo fan’s undying affinity for Super Mario Bros 3. To the layman or casual observer, these games were mere distractions. But to myself and countless other players out there, they were formative experiences. Whenever I play Sonic now, it takes me back to a simpler time: the halcyon days of Sonic were also my halcyon days. The problem is that it’s too simple a time and it doesn’t quite hold my attention the way it used to, but the first five minutes are always tremendous fun. It’s that timelessness that modern games- modern anythings- lack. Who’s going to care about Call of Duty 7 twenty years from now? The original CoD already feels farcically simplistic and primitive. Games should strive for timelessness, charm and heart, rather than skating after a puck that’s constantly in motion. That’s what Sonic and Mario did and it’s why we continue to play and revere those classics. It saddens me to think that future generations will rarely see a game with a blue sky before it’s blotted out by an alien vomiting the semi-digested corpse of a space marine.

Perhaps we shouldn’t put games on such a pedestal. They are, after all, tools for our entertainment: we shouldn’t hermetically seal them in bags for our collection, we should pump electricity through the cartridge circuits until we can smell the burning silicon. Games, books, films and even memories of some holidays and relationships are fleeting experiences. They blur with the passage of time until it’s difficult to separate the true memories from our mental reconstruction. However, the memories of playing Sonic the Hedgehog with my Dad until we reached its climax are indelible. To my mind, it’s not possible to make a better video game than this. But one day, I’d like to be pleasantly surprised.