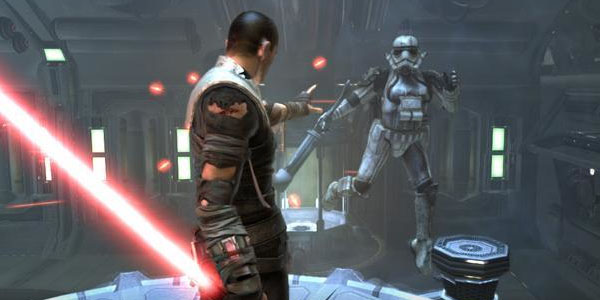 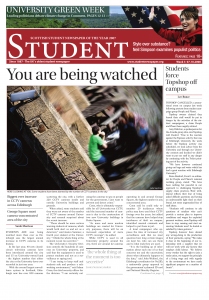 The Force is a mysterious and powerful manifestation of nature: a source of great strength for a Jedi as well as his potential downfall. How apt it is then that Star Wars: The Force Unleashed is both good and bad: light and dark, stunning and sordid.

With a story sandwiched between the third and fourth Star Wars movies, you are the secret Apprentice to Darth Vader undertaking such covert missions as hunting the remaining Jedi and not interfering with the established canon. Considering the tight restrictions, the game manages to carve out an enjoyable story that fits neatly into the Star Wars universe.

If only the gameplay was able to exhibit such freedoms. What appear to be detailed levels are ridden with invisible walls and ceilings. Travel along an alternative yet completely accessible route and you’ll slide gently off the scenery, back to where the designers think you belong. This is normally into battle against hordes of stormtroopers, which would be fine if the camera didn’t have its own covert mission of crippling your progress.

Your attacks target whoever your character is facing and not necessarily the camera. Each encounter becomes a tiered battle where the camera must first be wrestled into submission before the enemies themselves can be dispatched. This dynamic changes during boss battles, where the camera flees to a fixed position on the edge of the screen like a boxing coach watching his fighter get pummelled mercilessly by off-screen attacks.

In early sections, a gentle flick of the Force is all that is needed to send a stormtrooper hurtling through a plate of glass. However, you soon find that one in every four stormtroopers has purchased the new Force-ShieldTM that completely negates your most powerful Force attacks. It’s terribly unfortunate that this product was discontinued in later years. Cheap tricks like this result in the Force rarely being unleashed, merely dispensed with when allowed. You are never challenged in new ways; only shown that old tactics can be negated at will. Pulling down a giant starship into a planet using the Force should be cool, right? Not here. Somehow what should be a highlight turns into one of the most frustrating moments of the game, thanks to attacking TIE fighters that distract like mosquitos.

The game faces the challenge of incorporating a lot of new technology. Euphoria gives each enemy a sort of biomechanical AI; push them around and they stumble and flail about trying to protect themselves, their reactions driven by simulation and not premade animations. Digital Molecular Matter gives material real world physics: wood splinters, while metal warps under pressure. These engines are showcased in all their glory when the player takes Darth Vader on a stroll through a tropical jungle early in the opening tour-de-force: lifting a hairy Wookie into the air, you watch him flail helplessly trying to grab hold of something. Another Wookie grabs hold of his leg and they flounder together- you throw them through a wooden hut and watch as they spiral off into the sunset.

When The Force Unleashed gets things right, it is a euphoric symphony of destruction. However if you’re looking for a consistent blend of lightsaber action and groundbreaking physics, this is not the game you’re looking for.

Bonus: See if you can spot how The Student copy editor brutally killed my final paragraph with a single edit that made the print edition but has been corrected in the text above.