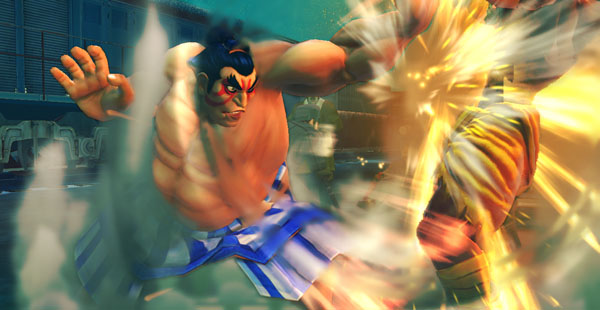 There is an intrinsic quality of Street Fighter that accounts for its continuing popularity: beating the crap out of people is fun (in a game- Split Screen legal team), doubly so if it’s your boastful friend who needs taken down a peg or two. Few titles have made as big an impact on the gaming landscape as Street Fighter II. With an iconic cast of characters like Blanka the big green freak and Zangief the big Russian stereotype, matched with easy-to-grasp controls and a burgeoning arcade scene, it led to an explosion in competitive gaming and a deluge of inferior wannabes.

18 years on and 27 sequels later, arcades have become the bastion of glue-sniffing teenagers addicted to one-arm bandits and electronic poker. What, then, is the relevance of Street Fighter in an era where most fighting games are niche titles for hardcore players?

Wisely, Capcom have gone back to the drawing board and built on the success of Street Fighter II rather than its successors. The original twelve world warriors return with their unique moves and personalities, while new challengers fit comfortably into the existing roster: ludicrous luchador El Fuerte and Rufus, the kung fu master with scary wobbling man-breasts, are balanced with the more serious femme fatale Crimson Viper, mixed martial artist Abel and Ryu’s sensei Gouken. Arguably, one of the main draws of the game is to see the stunning actualisation of the original cast in 3D.  Vibrant and silky-smooth animation is peppered with calligraphic strokes and ink blots to jaw-dropping effect.

Although the new characters are excellent, it’s hard to resist the draw of old favourites like Chun-Li and Guile. It’s like meeting an old friend you haven’t seen in years: you’ve both matured and got a bit fatter, but there’s still an undeniable rapport under the surface. Old pros will be pulling off fireballs and dragon punches within minutes while newbies will appreciate the intuitive “if it ain’t broke, don’t fix it” approach to the fundamental mechanics.

However, this doesn’t mean things are easy. Street Fighter IV is a classic Capcom game from the outset: tough but fair, unforgiving but rewarding. It doesn’t make any concessions to newcomers in the form of tutorials, preferring to drop you in headfirst and get an absolute kicking before turning to the instructions and reading up on the intricacies of combat. Even the tutorials are impossible to me to complete, although I’m not sure if that is indicative of the game or my skills. New focus attacks allow players to parry opponents’ strikes before countering, while Ultra combos can easily turn the tide of battle. As you are attacked and take damage, a ‘Revenge meter’ builds. When filled a character can unleash their most powerful attack, which can take off half your opponent’s health in a matter of seconds. Paradoxically, the game both embraces and shirks simplicity. Focus attacks are much easier to perform than the notoriously difficult Parry system from Street Fighter III, but there are so many gauges flashing on-screen that it can become a bit overwhelming.

Combat is a grittier, altogether different experience from the over-the-top madness of Marvel vs. Capcom 2 and the Street Fighter Alpha series. Punches and kicks connect with meaty sounds and visible grimaces of pain from the victim. Slower pacing allows for more strategy than fast reactions, which is reflected in the online play. Compared to the recent (and superb) Super Street Fighter II Turbo HD Remix, in which fights can be over in mere seconds, battles in Street Fighter IV feel more meaningful and considered. As someone who normally loses at HD, this means I get to enjoy more time getting beaten up than staring at a results screen.

The online aspect of Street Fighter IV is a mixed bag: while the integration of online challengers during your solo game is a nice touch, searching for games is an entirely different matter. To put it bluntly, it never really works and you’ll be punted back and forward trying to connect to a game for several minutes at a time. The greatest fun from a fighting game is always to be had when playing a friend in the same room and in this respect Street Fighter IV is no exception, but once finally connected to an opponent online there is an admirable level of tension with no game-breaking lag to spoil the fun.

Street Fighter IV is a wonderfully crafted title that will enthral both veterans and curious bystanders in equal measure. More importantly, it’s a successful reinvention of a classic franchise and a deliciously unpretentious slice of unadulterated fun. It raises the bar for the genre before savagely beating the competition over the head with it: this challenger has easily become the new champion.