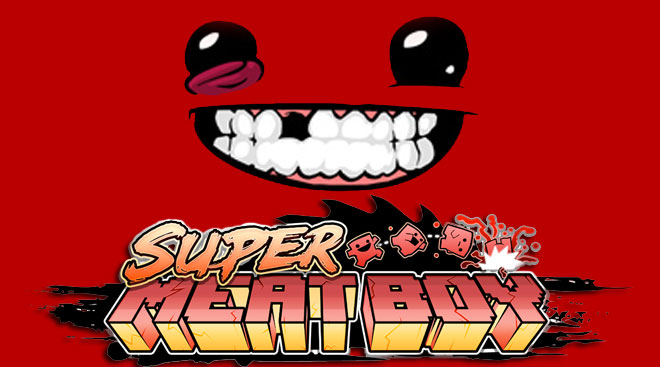 I remember when friendly and cuddly mascots used to be a dime a dozen: Mario, Sonic, Bubsy the Bobcat, Crash Bandicoot, Jak and Daxter. Now we’ve got Meat Boy, a cube-shaped crimson lump of flesh. See Meat Boy squish his way through narrow passageways, leaving a trail of blood in his wake. Watch him get minced- literally- when he comes in contact with a trap. Wonder why he’s so lethally affected by salt. Meat Boy has a princess to rescue, but she’s made of bandages. His arch nemesis is a fetus in a tuxedo and top hat. Clearly we’ve come a long way from Kirby and Yoshi.

On the face of it, Super Meat Boy is a simple game. Your object is to traverse each stage and reach Bandage Girl, whereupon she is promptly swept away by Dr Fetus and the process repeats itself. Meat Boy doesn’t have any special powers apart from stickiness. However, he doesn’t really need any since each level is a merciless gauntlet of saw blades, lasers, fire pits, spikes and killer jellies. The soundtrack from veteran indie composer Danny Baranowsky is perfectly matched- a pulse-pounding mix of metal and electronica that only adds to the thrills and tension of each stage. Super Meat Boy’s modus operandi is its difficulty. It’s not just hard: it’s balls to the walls hard, eyes inexorably drawn further into the screen, gripping the controller so tightly your hands lose feeling. Some stages are immediately impossible, while the difficulty of others slowly unravels when a hidden rocket launcher suddenly, violently terminates your perfect jump. Sometimes it’s an open pit filled with ravenous monsters and electrified fences, others it’s a narrow corridor while you’re chased by a torrent of what can only be described as killer detergent.

It’s remarkable that, in spite of the crushing challenge, it never gets frustrating. Ever. The controls are perfect, and that isn’t merely poor description on my part: when you die in Super Meat Boy it’s because you’re not skilled enough, plain and simple. Since there are no moves to learn besides running and jumping, you know the limits of Meat Boy’s physical capabilities within minutes of picking up the controller. The limits of your own patience and skill are yet to be established, but you’ll find that they stretch surprisingly far. The heightened challenge makes Super Meat Boy a very rewarding game to play. You gain a real sense of achievement from finishing the fiendishly difficult mazes; you feel like you’ve earned every success through determination and finesse. It’s a stark contrast to a game like Ninja Gaiden, where victory comes from luck or exploiting a flaw in the artificial intelligence. Death in Super Meat Boy is fleeting. For every Boy that falls, another pops back to take his place within seconds. There’s very little downtime, which eliminates frustration since you’re immediately ready to try your next hopelessly inept strategy. Victory is achieved not only by your quick reactions, but also by your success in solving the micro-puzzles in your way. Whenever you complete a level you’re treated to a hilarious replay where every attempt plays out simultaneously, which usually resembles a red avalanche if my experience is typical. Like fellow indie darling Braid, the level design is masterful. New obstacles are given a brief introduction before being integrated into challenging new scenarios, most jumps seem just a few pixels too far away and enemies are always exactly where you don’t want them to be. Fortunately (unlike Braid) you can skip a couple of levels in each section if you get stuck, which allows progress at the expense of your dignity.

Complete a level quickly enough and you’ll earn an A+ for your efforts, unlocking the ‘Dark World’ version of a stage that is meaner, sharper and even harder. It’s not enough to merely survive the levels: they invite you to race through them, shaving precious seconds off your best times to uncover even more substantial challenges. Enter one of the many hidden warp zones and you’ll be treated to hyper-pixelated graphics and NES soundboard remixes of the original music. These stages unlock characters from other indie titles like I Wanna Be The Guy and Gish, each with their own unique abilities. There’s more added content than a packet of Tesco Value Sausages.

Super Meat Boy is relentlessly brilliant, a wonderful example of how indie games can take us where blockbusters fear to tread. It issues a blunt challenge that is so meticulously designed with flair and intelligence, you can’t help but rise to it: and then fail, again and again and again, loving every minute of it.