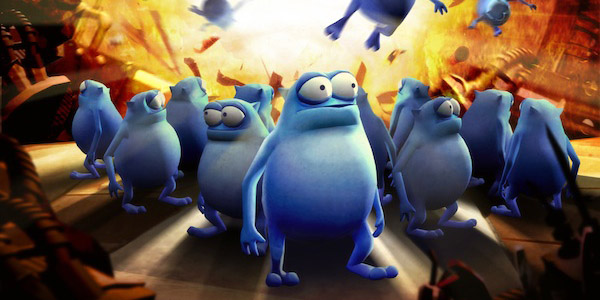 It’s not my fault entirely I was at first disappointed with Swarm; Hothead Games broke one of the Fundamental Laws. Swarm’s little creatures are blue, cartoon imps with googly eyes and permanent glaikit stare.

I couldn’t not think of the squeezy aliens from Toy Story or the flash mob antics of the sheep from Wallace & Gromit or Overlord’s mischievous gremlins or the seedling things from Pikmin or World of Goo or Lemmings. Going against the Law of Many Googly-Eyed Critters (rate of comedy increases with number of tiny creatures) the swarmites in question are rather charmless by comparison.

Considering Hothead’s jovial promotional material, the lack of genuine oddball humour in the game caught me off guard. There are levels with whacky names and the swarmites are collecting DNA, so Big Momma can get a new hat, but there are no real laughs to find here. Swarm’s world is a straight off the shelf barren and rusted alien planet full of mines, buzz saws, pits and electric fences. Far removed from the colourful gardens of Pikmin, it’s an oppressive dystopia closer to the industrial slaughterhouses of Abe’s Oddyssey. It certainly sounds oppressive. Sharp metal clangs and chromatic groans sound out against the rolling thunder and cheesed electric guitar.

My point is that Swarm feels wrong. Considering Hothead’s previous title DeathSpank, Swarm is in serious need of colour in every department.

It’s fast-paced too. It’s about high scores and chasing points. Controlling a horde of up to 50 swarmites at a time by racing back and forth across levels I need to collect orbs and destroy things for points all while trying to keep that multiplier going. Quick glances up to the power bar and back to the swarm, up to the power bar- oh, it’s about to run out- so I sacrifice some swarmites to extend the bonus in order to reach the next collection of tasty orbs. All in the name of a high score. And Big Momma’s hat, apparently. And that’s important because if you don’t a high score, you don’t get to play the next level.

What’s that? Stuck on Level 4 for two days? Well then you can march yourself right back to the beginning of the level and try again. And again. No I don’t care that you’ve physically made it to the end of the level. You’re not getting past with that low score and especially not in those trainers.

I had to watch a couple of videos of the developers playing Swarm in order to get past the early levels. Only then did I learn swarmites are disposable and are designed to be culled en masse to appease the Great Multiplier in the Sky, Maker of the Horrid Clanging Noise. But when I finally succeed, in my eyes at least, my best run looked pretty much identical to my “not good enough” runs. Visually speaking, both cases involve a bunch of swarmites bum rushing the show with arguably no more finesse than before. Compared with say a near flawless run in TrialsHD or Super Meat Boy or a really hot game of Peggle, the only indication I was doing well was the math being calculated in the top-left corner.

Now my low tolerance for unlocking integral game content probably paints a picture of me as a fuzzy, small mammal in need of nurture, praise and the occasional cuddle. I accept that. But in not having a gold/silver/bronze style pass system in place Swarm comes across as a sharp-toothed, somewhat dull minded dinosaur. A binary success/fail scenario? Remind me what is my incentive to keep playing when the game smacks me on the wrist for “not being good enough”?

Oh, yes: leader boards. Well like every other game on Xbox Live the global rankings are already dominated by the ungodly million-high scores of the masochistic savant and the guy who found a points glitch. So along with sight and sound, the sense of achievement and accomplishment also rang hollow for me. These old school mechanics are built around Swarm’s technically impressive swarm artificial intelligence. The swarm flow like a flock of fish, no single swarmite is the leader, and judging by the developers’ videos the AI required to convince them to clump together, form totem poles and pull switches and such is radiant and very, very clever. Whenever something comes out of PHD research it’s almost always very, very clever.

It’s just not very interesting. Partly the uninspired level design is to blame, which rarely necessitates a swarm approach. But mainly it’s the whole emphasis on speed and points collecting. The nifty moments when it comes together pass by far too quickly when racing across the levels.

Unless you don’t score enough points: then you get to replay it all again.