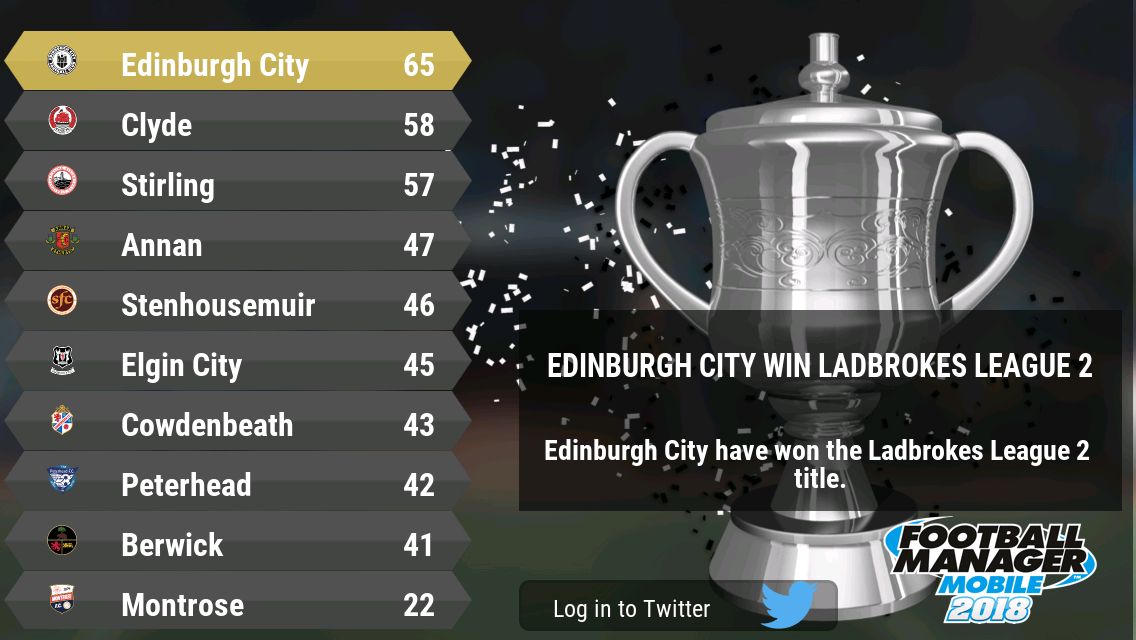 End of Season Wrap Up Party

And the Winner of The Football Manager DiariesTM Season One is…

My first season managing Edinburgh City has finished with the team sitting comfortably at the top of the league. If we didn’t win, we drew and we rarely lost. The draws all came in the second half of the season where the team’s performance really took a nose dive. My players became injured more frequently and the opposition sussed out my tactics despite my best efforts to change up strategies. But thank to the run away first half of the season I ended out on top. Suck it, Stirling. My castle is better than your castle. 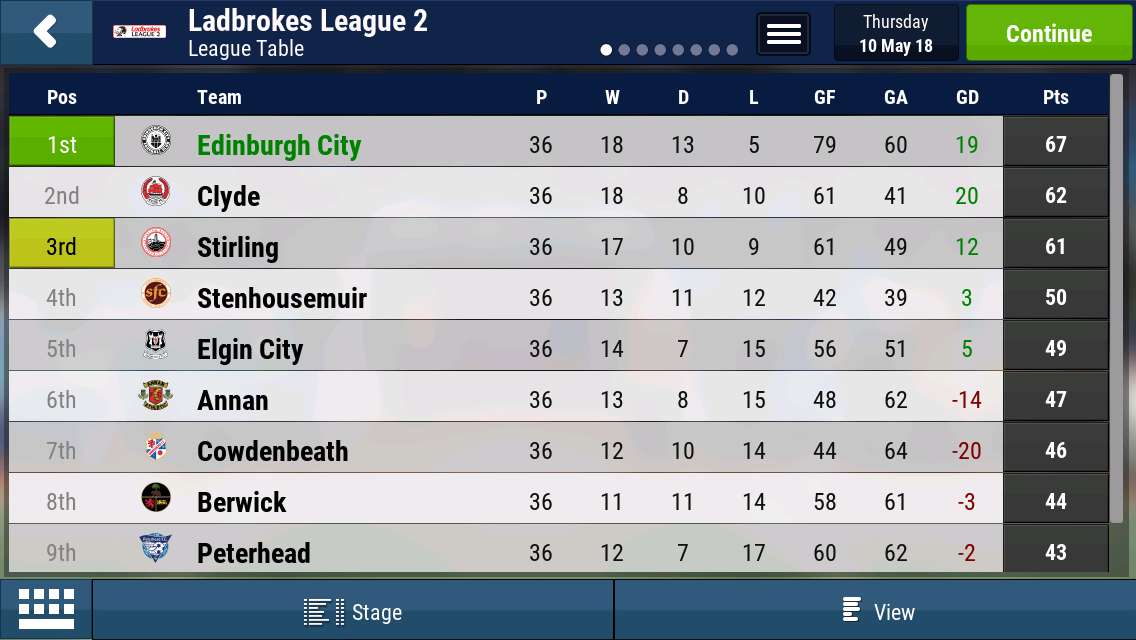 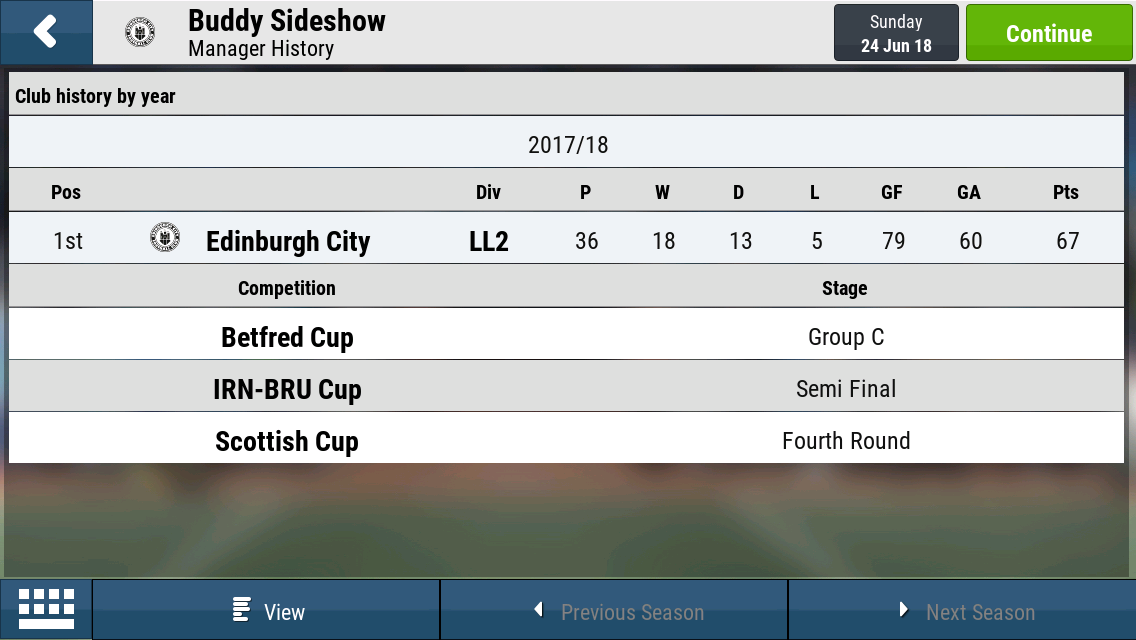 With the exception of making it to the semi-final of the IRN-BRU Cup we quickly lost out in tournaments. But tournaments will be around next year, and what I really wanted was to take Edinburgh City from the lowet division in the country to the top league. With this win we advance to from Ladbrokes League 2 to Ladbrokes League 1. There’s still plenty of rungs on the ladder to climb before we make it to the big leagues.

And the winner of Miss Congeniality is…

There were many stand out stars in the team. Ballantyne, Benzema and Hendrie were all top strikers and won many a Man of the Match for their goalscoring abilities. They also picked up a few accolades come the end of the season. Ballantyne was my favourite player though. He secured many of the wins, never got injured and was the cornerstone of my attacking squad. There wasn’t a “Pass The Ball To Ballantyne” option in the game but my tactics were picked to do just that.

And the winner of tonight’s match is…

Would you look at all those wins!

And now we hear from our panel of judges…

The Board were pretty on side for most of the season. I had each category maxed out with the exception of Finance due to me busting the wage budget with reckless contract renewals. The final report from them recognised that despite winning the season the team’s form was dropping. Many draws and loses came in the final matches and with key players due to leave the team things were not all golden for Golden Boy.

The above death drop symbolises the falling Finance rating from the Board. I had over committed on wages and I didn’t have any immediate levers to pull in order to correct the problem. My options were limited:

Thankfully I unintentially struck gold. After another Giant Killing performance against St Mirran the Board found a magic money tree and picked off £30k of additional transfer funds. Added to a few transfer fund raises I’d already received this finally allowed me to tweak the balance between the Transfer budget and Wage budget. I tipped the scale towards Wages, accepting I couldn’t buy any bidg budget players, and I fixed the Finance problem.

So now I am also the club’s accountant.

And welcome to the stage…

As mentioned I needed new players. I did a lot of Scouting and found success in signing new midfielders and strikers. Most I secured for little to no money at all but it was a tense time. I fully maximised the days the transfer window was open and to be honest it was a really nice change of pace from the tactical management of matches.

And Welcome to Season Two…

Or really we suck in Ladbrokes League 1. Oh man this is not going to be a cakewalk like last time. I promise the Board a safe mid-table position and I think that is attainable but the effect of playing the next league up is having a mighty toll on the players. Their fitness is terrible across the whole team and is not recovering fully between matches. This forces me to substitute key parts of the team on a weekly basis to get around injured or severly fatigues players. I am barely winning matches and when I lose I lose decisively. There are many matches were I don’t even get a single shot in at goal. The morale is dropping and the Board are not pleased.

But will we back for a Season Two finale?

I’m definitely going to keep playing but I don’t think I’m going to write any more entries to The Football Manager DiariesTM. I’ve reached that point where I’ve not played as much this week because I had 150 screenshots saved to phone to sift through and potentially write about. As I mentioned in an earlier post, as soon as this diary started to impinge on actually playing the game I would stop writing. Perhaps when I finally move on from playing Football Manager Mobile 2018 I will do a final wrap up.

Until then if you have not played a football management sim in many years I really recommend you check out this version. It’s an old dog that has been given new life on the mobile gaming platform. It’s still Excel with a football skin and it’s still brilliant. While the full PC version of Football Manager continues to add layers and layers of complexity the fundamental core of picking a team and managing the numbers remains unbeatable.