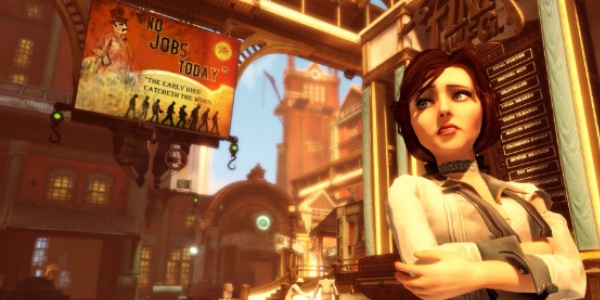 The Girl Who Wasn’t There

“The smartest companion ever”, said the BioShock Infinite reviews. Irrational Games enlisted the brightest real intelligences to create the brightest artificial one, Elizabeth. “She’s smarter than an octopus holding the brains of eight dolphins”, said an internal memo I just made up. Allies in videogames tend to be comically bad (Daikatana, Halo‘s drivers), unmemorable (Halo‘s marines), or really very good because you’re Half-Life 2 and do everything right (Alyx Vance, Half-Life 2). With Elizabeth, comparisons were being made to the aforementioned Alyx. I expected a buddy who knew how to pull off a headshot, while helping me unravel the plot. Instead, Elizabeth is the girl who is always there, and yet, never is.

Mechanically speaking, Infinite is more vertical than most shooters. Player-character Booker DeWitt can boost onto hooks and skyrails throughout the city of Columbia with some dubious magnetic explanation. Elizabeth (at the player’s instruction) can tear open holes to alternate dimensions. While many shooters rely on the player manipulating enemies – exploiting their AI to funnel them into corridors, flushing them out with grenades – Infinite relies on the player manipulating the environment. Yet for all the advanced AI supposedly under the hood, Elizabeth spends most of her time following Booker like a lost puppy, or usually just hiding in a corner. After thirty years of videogames, we’ve computationally solved half the problem of hide and seek.

I expected Elizabeth to help me in these fights: to open tears of her own accord, to shoot lightning out of her fingertips or something. Through the course of the game, she shows no hesitation to use violence – except when we’re meant to be shooting instead of watching the story unfold, and she ducks behind a crate. You won’t even remember she’s there until you run out of bullets and she throws over a rifle. But that’s no more intelligent than a game highlighting your ammunition counter in red when you reach your last magazine.

The true hallmark of an intelligent companion, according to Bill Coberly in Issue 1 of Five out of Ten, is one who responds organically rather than with canned lines. Instead of picking a sentence and following a branching conversation to a conclusion like Mass Effect, we would instead communicate to these agents with natural speech. As the experimental game Facade shows, often hilariously, we’re a way off from that yet. The only real alternative to that is a system of tripwires, where crossing an invisible line triggers some dialogue or a reaction. This is exactly what happens in Infinite, and much of the incidental story doesn’t occur without paying literal attention to Elizabeth, staring into her face constantly like a particularly awkward Skype conversation. Elizabeth is a character without agency, while Alyx knew how to open a door.

I was never convinced by the relationship between Booker and Elizabeth. Having a first-person game where the protagonist has a speaking role doesn’t really work, unless you’re playing as a cartoon character like Duke Nukem. I believe that Booker is meant to be more than a cartoon character, even if his usual day’s body count wouldn’t be out of place in an 80s action movie. Whenever he speaks to Elizabeth, it reminds me that I am not him, but doesn’t explain why I’m being made to believe I am him. Or at least, an approximation of him with a camera for a face, but that doesn’t match the box art in the way it did for the first BioShock. Part of the problem is that we don’t know Booker’s backstory, and unlike other soldiers like Master Chief and Marcus Fenix, his matters to the story. This is necessitated by the fact that Infinite has little interesting to say that doesn’t rely on twists and cryptic endings. But still, every time he says something, I don’t understand why. I don’t want to know more… I just find it irritating. Portal 2 portrayed a relationship far more convincingly than Infinite, and that relationship was between a silent protagonist and an artificial intelligence embedded in a potato.

We move from one environment to the next, Elizabeth admiring the architecture while I rummage through a bin for some RPG ammo, then hiding behind the bin when I get in a fight. Unlike the original BioShock, which told a lot of the story of Rapture’s downfall through its environment, Columbia is a society still clinging on to itself and populated with characters. The voxophones you find littering Columbia have stories to share, but this also highlights that the characters themselves have nothing to say. Compare this with Deus Ex, a game that’s now thirteen years old, where you could end up discussing Descartes with a homeless guy in a sewer and even the rats chewed on Shakespeare plays.

What I find really interesting about Infinite is that I actually wanted more things to shoot. BioShock was an exploratory adventure, broken up with irksome battles. Its sequel is a really hollow and unconvincing place: far from the “living, breathing world” nonsense people spouted about GTA IV, Columbia is a cardboard cartoon as light and ephemeral as the nonexistent ground on which it stands. With no conversations to be had, no wonder you end up killing most of the people. Still, what a pretty place in which to kill them.