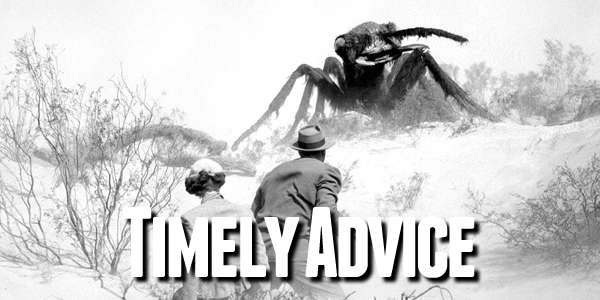 A letter to my sixteen year old self.

I am contacting you from the year 2012. The purpose of this message is to warn you of the horrors of the Ank’hor, the insectoid race which emerged from the Earth’s bowels in 2008. Their voracious appetite decimated the human population; we survivors live in fear in camouflaged pits. As I write, it is daylight and I am safe from the Ank’hor. Yet they pass closer to our camp every day. At night I am woken by the screams of those discovered and devoured by their razor-sharp mandibles. I am so hungry, Alan, and my fellow survivors look so… delicious.

When I freed the time djinn from his lamp prison, he allowed me to divulge three pearls of wisdom from the future. I do not wish to anger the genie, so I’ll stick to his rules. While I could give you a whole heap of practical advice like quitting smoking and exercising (the djinn has just raised his eyebrow at me; I’m walking a fine line here) I thought I would focus on your writing career.

You are young and idealistic. You think you’ll be a games journalist one day; you think that editors will just throw work at you when they read your articles and see your raw talent. This is not the case. Now don’t get me wrong: your Ecco the Dolphin walkthrough was great! I enjoyed it! Yet you’re arrogant and you swear too much. That won’t really change in the next ten years, but you will become more aware of it, so at least that’s something.

Here are my three pieces of advice:

You play a lot of games, and that’s good, but you play the same ones over and over. You’ve spent a thousand hours in Phantasy Star Online, but you’ve never played Ocarina of Time! I know you’ve been exposed to years of Sega propaganda, but Nintendo games are actually really good. People are going to laugh at you in the future for not having played them, and no one’s going to care about your high score in Crazy Taxi. If you think Sega games are uncool now, the future is worse than subjugation by the Ank’hor.

You think you read a lot, but old issues of Sega Saturn Magazine don’t count. How can you hope to criticise games as an emergent art form if you don’t understand their analogues in literature and classic cinema? Read constantly. Read everything. Don’t play Tiberian Sun again, read Stephen King’s Dark Tower series instead: they’re in the room next to you gathering dust, and you’ll love them. There are whole worlds of experience wait to be discovered beyond your narrow spectrum of listening to Iron Maiden and reading video game magazines.

Read the work of other games writers, especially. It’s easy to turn your nose up at it and think you can do better, but that matters very little if you’re unable to prove it. You can’t stand on the shoulders of giants if you’re kicking the giants in the shins; you need to absorb and analyse their work, then write something even better yourself. I used to disparage what I didn’t like until I realised that, by approaching them with disdain and not submitting alternative writing for publication, I was part of the problem and not the solution. Be the alternative you want to see.

Oh, sixteen year old Alan. You are a lonely guy. You don’t have many friends in high school and you spend a lot of time interacting with people online- mostly in Sonic the Hedgehog fan forums, if I remember correctly. The good news is that the friend situation gets better: you’ll meet some life-long friends in university, so keep your chin up until then, slugger!

That isn’t to say that Internet friends don’t count: I truly believe that they do, and there are some wonderful people out there I can’t wait for you to meet. Email some writers and get yourself involved in places outside the elitist old boys’ club that is the GameFAQs Review Contributors board. They’ll never accept you. You don’t need their acceptance.

I know you think that gaming is an exclusive club, though. It’s only for nerds like you and I who have been around since the Mega Drive days. We don’t want people ruining our beloved video games and diluting the things we love about them. So I ask you this: do you remember whenever mum played Virtua Fighter 2 in 1997 and we all had a fun time?

Imagine if every game was that much fun. Imagine buying mum a games console and her playing it of her own volition. That happened last Christmas- you bought the console! Games are for everyone. You can share that passion with people who don’t play games; you can share it without shame. Being a ‘nerd’ is just another word for ‘passion’, and what’s more interesting than people’s passions?

Other people don’t have to lose so you can win. That’s probably the most valuable advice I can give you.

You need to read more than you write, but you still need to write a lot. Start a blog (don’t make a page on Geocities, that won’t end well) but don’t resign yourself to reviews of ancient games that no one is going to read. It’s easy and comfortable to write what you know, but it’s also predictable and boring. The best writing over the past few years has challenged my preconceptions of gaming. It has challenged my preconceptions as a human being. If you can manage that, then you’re onto something.

Through writing, you don’t just externalise your thoughts- you develop them during the writing process. Writing is thinking, thinking is writing. Sometimes you end up going to a place you’ve never been, other times you just write a load of garbage, but you should never be afraid to withhold work that isn’t up to scratch.

To my mind, the best writing is imbued with the author’s personality, and not enough game writers do that. They’re so obsessed with ‘objectivity’ that they think they have to talk about everything: how many reviews have you read that shoehorn in a paragraph about the ‘graphics’ or ‘story’ and other things that didn’t really matter to them? What matters is how you feel: what made your heart sing, or why the game left you feeling cold.

Going further, you can look at the wider context of the game and what it says about us culturally. Games have moved away from being mere abstract entertainment, and this will continue. Today’s critics need to recognise that the medium does not exist in a vacuum: while games don’t turn us into killers, the way in which we represent killing can still dehumanise us to an extent. Games reflect and influence wider societal discourse.

I no longer have the luxury of throwing writing at the wall to see what sticks. To put this into perspective: I deleted your GameFAQs reviews two years ago because they were so awful I thought they would endanger my professional career. Sorry! They were far from a waste of time, though: they were important in becoming who I am today. So thanks for writing all that puerile, embarrassing nonsense.

One thing worth pointing out… oh, excuse me one second.

“No genie, it’s part of the broader third point! It’s not a separate fourth topic!
I do not wish to attract your ire, O Lord of the Lamp.”

Sorry about that. One thing worth pointing out is that the Internet never forgets: your work is saved forever and it can never be truly deleted. Also, people still have memories online, so don’t make a tit of yourself.

At this point in your development, ‘editing’ is a foreign concept. It’s not using Microsoft Word’s spell check, buddy. It means getting someone else to read your work (better yet, someone who doesn’t like you) and listening to their feedback. If you write for a magazine or website and they don’t make substantial edits, they mustn’t be reading your writing, because it’s terrible. Self-editing is pretty much impossible: only an idiot would say otherwise.

Rejection isn’t something that should dishearten you: rather, it should galvanise you and make you want to try even harder. Some people choose to give up after being rejected- they even write entire blog posts about how ‘unfair’ the industry is- but I think it’s because they realised they weren’t up to the challenge. You are.

I read a speech today about the role of ‘luck’ in success (that hyperlink probably won’t work for you right now, but you’ll read it before you write this to yourself- you’ll have to trust me on that). Despite the face validity of the argument, I choose not to believe it. Sure, chance is a part of everything: it’s the reason you weren’t hit by a bus today or didn’t win the lottery. Yet resigning your outcomes to the roll of fate’s dice is a terrible way to live: we make our own luck, and even the luckiest person on Earth won’t get far without talent and effort.

I would love to give you more writing advice, but clouds of furious genie smoke are billowing around me. I thought I could hoodwink him, but his wrath will be severe for extending “three” tips into fifty discrete points. Know this: I believe in you. Go change the world.

Now, if you’ll excuse me, these dinosaurs aren’t going to race themselves. Didn’t I tell you about how we’ve cloned dinosaurs?