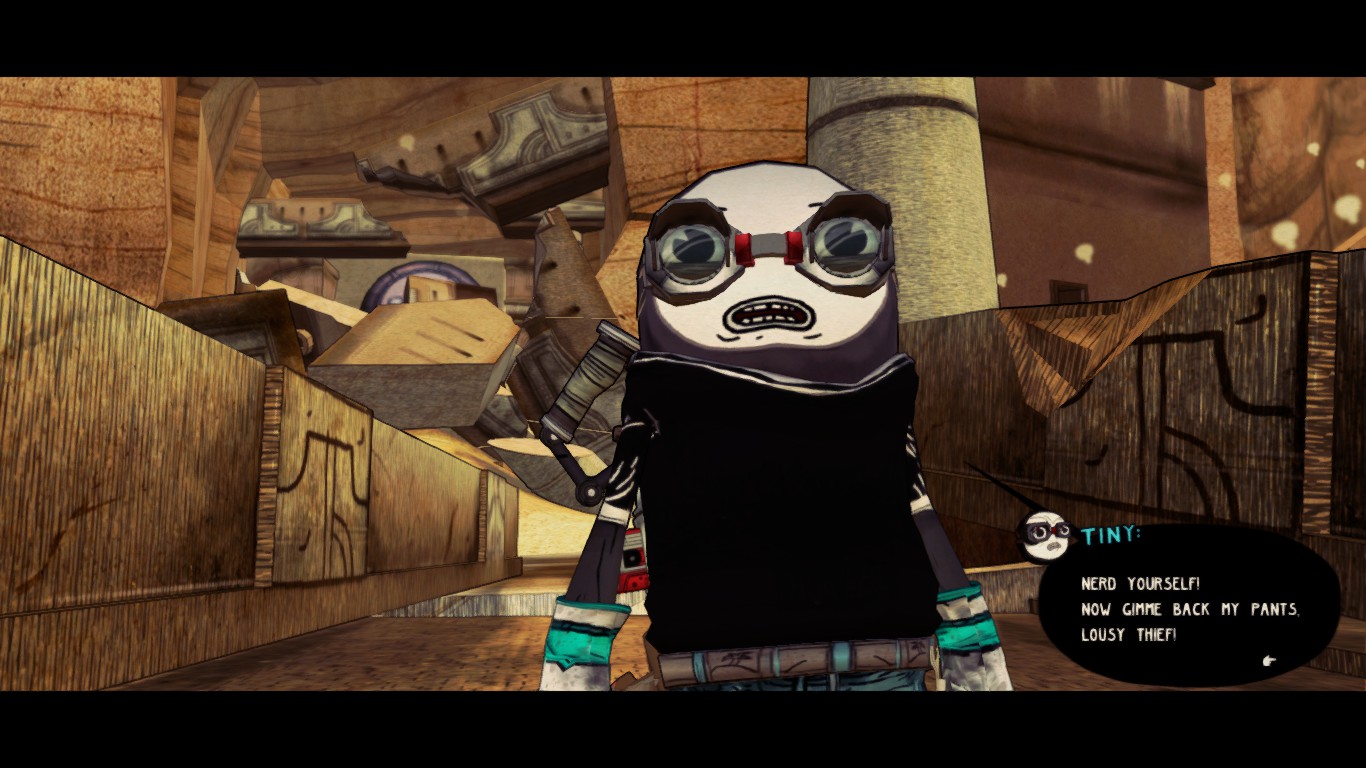 Touch. So very few games make me feel like I touch the world let alone have the world respond. In many ways this the secret of Minecraft: a world composed of blocks, each and every one tactile and responsive, and the closest I ever feel like being able to reach down in a videogame and run my hand through the grass.

Tiny & Big lets me run my hand over stone. And with the laser, rope and rocket I can cut, carve and manoeuvre it with freedom rarely afforded these days.

Freedom in puzzle games is often a myth. Portal 2 in particular lost much of the magic of Portal 1: True Perfection by creating chamber and navigation puzzles that only ever had one solution. There was no delta allowed between your attemps and the designer’s desired intent. While the world of Aperture Science brimmed with character playing Portal 2 is devoid of expression.

Tiny & Big is different. The puzzles require cutting out solutions from blocks and pillars of stone in order to traverse heights and cross gaps among other things. The laser cutting tool freely rotates around an axis and I could carve segments out of the rock to my own design. Sure, sometimes my solutions were not elegant but I was allowed to try and succeed by my own design.

I was allowed to be expressive. The minimal, desert world of Tiny & Big is surprisingly expressive too.

One great moment is when faced with a seemingly endless series of pillars obstructing my path I cut them all down only to have the camera zoom out and rotate to reveal the following: I love jokes that undersell the setup in order to land a great punchline.

The whole game feels fresh. There’s the equivalent of fetch and escort missions with stone underwear in black lit neon tombs that shouldn’t be fresh – they should be annoying – but the world is so effortlessly cool and consistent it all works. I was convinced Tiny and Big had to be characters from a comic or show because for a relatively short game with relatively little dialogue it builds such a coherent and quirky little world.

The only bad word I have to say is the final boss fight is *brutal* and took many failed attempts, two rage quit, one YouTube walkthrough and much gritting of teeth to complete.

Though despite this brief, disappointing ending nearly chipping my teeth like the carved dentistry from earlier, my smile remains intact.

(The killer soundtrack also keeps the smile on my face, especially ‘Sport Acapulco’ by Man And Birdmen.)