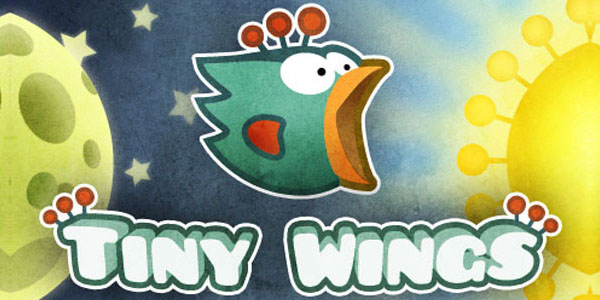 Tiny Wings is an oddly majestic little game and it does it all using a few haiku-like verses and some very clever tricks.

Your wings are tiny
But you have always dreamed of flying!
Luckily…
The world is full of hills.

It’s a very simple idea and a very simple joy in making this little bird fly. Gliding down the slopes gains speed and launches Wee Birdo into the air. Familiar to anyone who’s played on a swing set, it’s all about weight and timing the descent just right so to land into the next welcome slope. Each perfect swing sweeps a little further than the last, just like a kid or a drunk student down the park trying to swing higher and higher still.

From the perspective of the secluded childhood gamer, it’s a sense of flying not like Angry Birds at all but like Mario, swooping and ducking through the air with the wing cap and Superman cape. And the sheer speed that can be whipped up seems to me to be the spark long absent from Sonic’s repertoire- it’s no replacement but it with these few familiar notes, it’s struck a chord with me. Now that’s fine and fun in it’s own way but the real clever bit, the genius of it all, is when that little bundle of turquoise pixels takes flight. Wee Birdo chirps and squeals with infectious delight. Like the chattering goo balls from World of Goo and wooping ninja-rope Worms, their relatively small size hides an abundance of character and charm. Each island ends with a steep incline and a launch ramp sends the plucky bird sailing across the sky, unleashing a triumphant Yahooooo, like a gold medal ski jumper or triple-jumping plumber. Then it’s straight onto the next lushly coloured landscape, bouncing along to the upbeat music.

I’d thought the one-button controls of touching the screen to swoop down and releasing to fly up would be simple enough for my parents. Tiny Wings took the top spot away from Angry Birds recently so clearly there’s universal appeal.

I was wrong. Birdo barely left the ground. But even that was familiar because they were rubbish at the old Nintendo games too. The difference here being the constant forward movement, the game never comes to a complete stop after a bad jump, there’s always another hill coming up.

This is shallow iPhone gaming at its best – a quick Bejeweled-like fix in your pocket. And like Bejeweled I’ve played it for hours and hours. The achievements are non-obtrusive and silly in a good way so if you want to chase points and leaderboards then you can.

For me Tiny Wings is a sure thing, a guaranteed blast of sunshine.