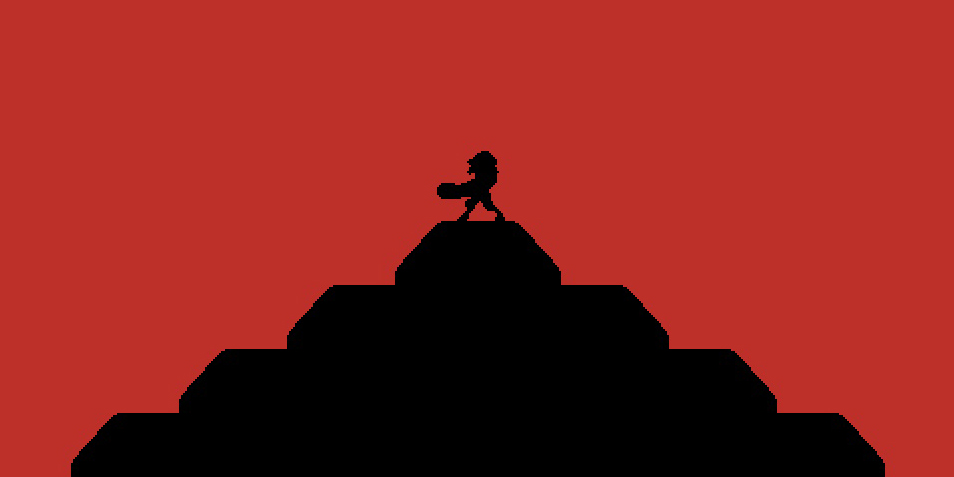 iPhone games are great, aren’t they? They only cost 59p. There are thousands to choose from; some admittedly dross, but also fun ones like Super Quickhook and Jetpack Joyride. Every week there’s another cool app on the scene to steal five minutes of my time.

But here’s the thing: it’s only ever five minutes. iPhone games provide an amazing ninety seconds of entertainment, a great five minutes, a repetitive twenty minutes and then I never play them again. I never warmed to the frantic action of Super Crate Box, a game in dire need of physical controls. The Incident is the most repetitive game I’ve played since kicking a ball against a pebbledashed washroom wall on an empty caravan site. These games have their five minutes of fame and then they disappear into a generic games folder on my iPad, never to be seen again.

This week’s flash in the pan is Ziggurat. You stand at the top of a pyramid. Aliens have invaded Earth, and they’ve won. It’s the end of the world. There’s no escape from the summit: you can only defend in vain against the hordes of alien fiends before you eventually succumb, screaming like a dying electric guitar, as the screen fades to red.

By sliding your finger along the bottom edge of the touch screen, you aim a green laser cannon. Tap and hold to charge a shot, then release to fire in an arc. The longer you hold, the less the shot curves. You can pick it up in a matter of seconds, but there are other factors to consider. As the alien freaks encroach on your personal space, their heads swell and shrink: hit them with a well-charged shot when they have an engorged bonce and they’ll set off an explosion that can clear half the screen.

Some freaks pogo towards you, spitting out the odd pink bullet as a distraction. Yellow freaks skulk up the side of the pyramid, leading to frantic tapping as they try to munch on you. Red freaks hide behind forcefields, then swoop in at an angle. Giant freaks… are big. The more you kill, the faster they come, drawn to the smell of the vaporised pixel blood. It looks like a SNES game, but it quacks like an NES game, with a chunky chiptune track that’s just the wrong side of repetitive. Ziggurat is a one trick pony. To be fair, it’s a cute looking pony. Its eyes bulge in and out to let you know the optimum time to jump on for a ride. It winks at you knowingly with its social networking features and witty achievements. But ponies age quickly, and you outgrow them. You return to see if you’ve retained your old horseriding skills, but you crush the pony under the weight of previous expectations and break its spine. So it’s off to the knacker’s yard; for Ziggurat, that’s the iTunes library where it will remain in stasis until the end of time. A digital graveyard, filled with little coloured tombstones of apps from years gone by.

I like Ziggurat‘s cleverness: I understand it. I even looked at a strategy guide that reads more like a dubious advertising piece. There’s a lot of nuance packed into such an outwardly simple premise. Yet, nuance is not enough. Intelligent mechanics are great, but only whenever a clever design decision leads to an impossibly compelling game. It’s only when you’re fighting sleep as well as aliens, when you see raining puyos or endless Pokémon battles in your dreams, that the simple becomes the sublime. I’ve never been compelled to play something just because of how terribly clever it is. Ziggurat is terribly clever; it’s just not terribly fun after the first few plays.

iPhone games are great. Aren’t they?