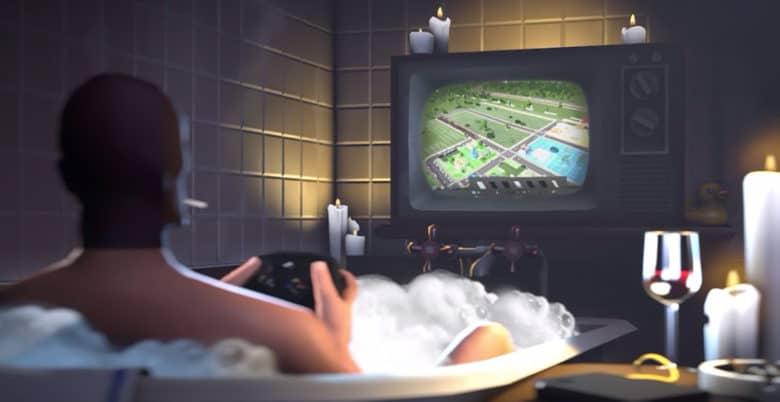 The Steam Controller, Steam Link & Me

A Dream, Because No-One Else Believed In It.

It’s an odd feeling to look out your living room window and see a world that doesn’t match your own: A society divided into two; fear of the unknown; the death of nuanced views; industry greats failing despite innovation. And that’s just Valve calling it quits on their dream of bringing PC gaming to the living room. The less said about UK politics, the better.

Yesterday, the final boxes of Steam Controllers were sold and the product is officially discontinued. The Steam Controller is no more, it’s ceased to be, expired and gone to meet its maker.  It’s a stiff, bereft of life, it rests in peace. THIS IS AN EX-PRODUCT!

Except here, in my living room, the dream of PC gaming on the couch lives on. And the dream lives strong.

Take a Look at The Big Picture.

In 2012, Valve’s laid the foundation for their goal of uniting the PC gaming and console gaming societies with the addition of Big Picture mode to Steam.

Back then I was rocking a wee laptop just capable of running Team Fortress 2 on the lowest settings. After another two-hour 2Fort stalemate, I noticed Steam proudly sporting a fetching ‘Big Picture’ button, so much so it sat on the top bar alongside the mighty god buttons (Minimise, Maximise and Close window). “Oh boy, howdy, this is gonna be hella coolio,” I said in the parlance common of the time. I clicked Big Picture and up opening a clunky box-ridden mess of menus that were unintuitive and dire to navigate on keyboard and mouse. Like chancing upon a hipster, breakfast cereal pop-up bar, I was confused, so I left and dismissed the venture entirely. Big Boxy mode was not for me. It was an amusing distraction, like enabling Big Head mode in Goldeneye, enabled only when I misclicked the minimize button.

Valve’s dream of PC Gaming in the living room for me was over before it started. At this time, I was renting a room in a flat near Wimbledon. On the rare times when I wanted to play a PC game on my big TV in the shared living room, I was happy to pick up and plonk my laptop on the TV stand, plug in an HDMI cable and grab wired XBOX controller. Plenty games, including all decent console ports, supported controllers at this point. And if the game didn’t natively support a controller then I could fruitlessly wrestle with a controller-to-keyboard mapper like JoyToKey for an hour by which point my nomadic fancy would pass and I’d slink back to my bedroom.

Over the next few years, I moved around the UK and lived in differently shaped flats but above gaming set up was the same. In time, my laptop gave way to my current gaming PC, the HDMI cable got longer and, if I wanted to watch Netflix or Youtube on my non-smart, now not-so-big TV, I did what I did before.

Big Picture was never a part of this picture. The dream went dormant for a few years until Valve made real advances by making real things out of real materials.

2015 was a good, if ultimately expensive, year. Valve debuted in quick succession the Steam Link and Steam Controller. The Steam Link solved the problem of Future Craig having to strategically position his PC in an adjacent room in his future house and drilling holes through his future walls to feed an HDMI cable. My old set up was never going to be practical and bar flooding my prospective home with ethernet ports in every room, I wouldn’t be playing PC games in my living room.

All this was hypothetical. I had no real desire or need to play PC games on the couch. This was during my full-on Five out of Ten magazine days so I clocked a lot of screen time and the thought of more was not welcome. Yes, it can be more relaxing to play games on the couch on a big screen but I was now living with my partner so I’d curtailed my solo gaming. My relic of a PS3 sat beneath the TV as the delegated Netflix box and dust trap.

The Steam Link eliminated the need for hot-swapping cables and audio drivers. That wasn’t enough at launch though to overcome the £49.99 price tag on its own though. The Steam Link had my curiosity, but it was the Steam Controller that had my attention.

Let’s reflect on the Steam Controller using the transcript from its introductory video:

Games are experiences. And how you play can be just as important as what you play. For too long, players have had to choose between the precision of a mouse or the familiarity of a controller, between the power of a PC or the comfort of the couch. But why shouldn’t you get to have both?

Yeah! Why can’t we have both? Who’s been stopping us? Let’s take to the streets and fight for the right to LAN party!

The Steam Controller isn’t just a gamepad. It’s a passport that brings thousands of games previously only playable with a keyboard and mouse to the comfort of your couch. Using one-to-one positioning, the Steam Controller can virtualise familiar controls like a trackball, a mouse or a scroll wheel.

It really does open up those keyboard-and-mouse-only games to a controller. The Steam Controller sits as a wrapper around your games with its own button configuration menu (accessible at any time). This means you can set a controller button to a keyboard key or mouse button while the in-game controls remain keyboard only. Yes, it’s a passport but you can’t necessarily show up anywhere and waltz in. Some games need you to sort out your paperwork and visas before they let you in.

You can also effortlessly type from the couch. We’ve tossed out hunting letters with a cursor and made surfing the web as texting with your friends.

The dual-track pad typing is the best controller keyboard out there but it’s still a slog. The dream of a perfect way to type away from the keyboard remains to be realised.

PC gaming is all about options and that’s why you can customise everything about your controller on a game to game basis. Don’t have time to figure out the perfect layout on your own? Turn to the Steam Community and download the control scheme that’s right for you.

I love Options menus. I tour the Settings on all my devices for fun. The Steam Controller is the most customisable device I’ve encountered. It’s delightful and incredibly daunting. You are left alone to decipher out what the hell it all means. It took a few hours study of Youtube tutorials before I felt I had a grasp on the controller’s potential. Once it clicked, it became my favourite controller (with the exception of one genre). The Steam Controller is the Dwarf Fortress of gamepads.

Dive in and surf the web or hook up multiple steam controllers and have your friends over for a night of fun.

No. Did not happen.

Are you looking to step up your competitive game? The dual-stage triggers of the Steam Controller have both an analog pull and a digital switch. The grip buttons on the back mean never have to take your thumbs off target again. And all of this is brought together real-time haptic feedback delivered by twin force reactors.

One of my favourite configs is to have the soft-pull of the left trigger look down the sights of a gun and the full-pull of the left trigger firing the shot. This brought a new edge to sniper shots and kept my thumbs dedicated to movement, and back grip buttons for jumping. Paired with my setting for activating the gyro motion controls by touching the right trackpad, which I use for aiming, creates a way of firing weapons that is mechanically more please than a mouse click.

Complete mobility and weaponry, and all with few button presses than it takes to fire a gun in the first-person view in Metal Gear Solid 2.

Bring your favourite games, friends and features to the living room the Steam Controller.

The introductory video holds up. It’s representative of my experience. A steep learning curve for sure, but once conquered, it really surpasses conventional gamepads and took my PC gaming in a new direction.

Remember when Valve made whimsical things with robots in it?

But It Came At A Cost.

I bought both Link and Controller in a bundle soon after launch for £110. Within the first year of release, you could both in a bundle plus a game for around £30. This week, I bought a second Steam Controller for a backup for £10. The tale of the price tag tells you how these products were received. Generally met by mild interest, confusion and annoyance. Perhaps I just sat in the exact use case where it all made sense. Or perhaps I’d invested enough hours to overcome the initial barriers.

Did I get £110 worth of value? Yes. Do I regret paying £110? My wallet does but I’m happy I supported Valve breaking the mould.

My List of Some Of The Games I Played With My Steam Controller Through My Steam Link on My TV In My Living Room.

The main genre that proved beyond the Steam Controller in my hands was true twin-stick shooters or anything where a second thumbstick was needed (like Snake Pass). In those cases, I’d grab my wired XBOX controller which is now supported through the Steam Link in a similarly customisable way to the Steam Controller.

Is The Steam Controller and Steam Link Worth It In 2019?

For me, if I’ve not made it clear, I will continue to use my Steam Controller and Steam Link until the hardware breaks down. 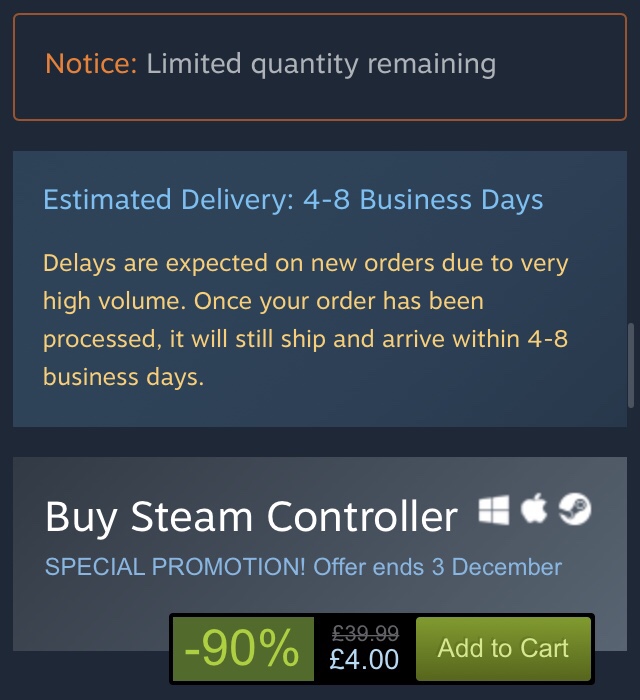 I’ve got that second, backup Steam Controller ordered and on its way. The Steam Link is discontinued like the hardware but lives on for now as software downloads on Apple and Android devices. Steam Link now sits on my iPhone and, while I haven’t played any games, I have used it to shut down my PC from my bed.

The future is now and has been for a while: PC gaming is in my living room. Though despite my affinity for the Link and Controller, I suspect mine is one of the few living rooms where Valve made the dream last.