In issue #3 of Five Out Of Ten, I wrote an article called ‘(And Other Mistakes I’ve Made)’ which was a self-portrait of infographics, visual wordplay and badly done Photoshop.

The gimmick in Five out of Ten was that each issue had five writers who each wrote two articles: One on a shared theme, and one on anything they wanted. Hence, five out of ten articles were themed. Issue #3 was ‘Reflecting Reality’, and I wrote about how wars are recorded in videogames (‘Documents of War’). I haven’t read it in years, I hope it stands up.

For my “anything goes” article, with an entirely wide-open horizon of possible topics, I chose to tilt my head down and naval gaze. Cheating, I stuck with the theme and reflected on my own reality of struggling to make stuff about videogames. I could make stuff, mind you, I just couldn’t make it fun anymore.

Is there a clearer sign my creative tank was running dry, that I wrote an article about struggling to write an article? It’s like those god awful songs about writing songs, of which I have also written a few.

‘(And Other Mistakes I’ve Made)’ is in essence about turning a hobby into a job and killing the passion. I started out writing about video games for fun, I had some moderate success, I tried to chase more success and, in doing so, killed the passion until I finally had to stop and step away entirely.

That was back in 2013, and for the rest of the run of Five out of Ten, I channelled all my creative energies into designing the magazine. I didn’t make much of anything else during that time.

But that doesn’t mean I stopped stockpiling. Oh no, my phone amassed over a hundred voice demos of guitar parts and song ideas hastily recorded in the moment that may eventually form part of the next adiosFamous album. I have documents of game ideas, a rated list of every game I’ve ever played, and even a humble .txt file called “one-liners” cultivated with over a decade of writing that has no place or purpose. Hell, even SplitScreen has a stockpile of 24 draft articles in various states of completeness.  Some have been resurrected long after the spark has dissipated but remain unfinished.

Eventually, possibly, these raw materials will be turned into something whole and complete. Until then, they serve as attempts to bottle flashes of inspiration, to capture the moment, and to allow me to move on. Or more accurately perhaps, to not get hung up on not following the idea to completion.

I concluded my Five out of Ten therapy session with the acknowledgement I needed to “disconnect and reset”. This was easy to admit, though a little misleading considering I’d spend a further 17 issues connecting with other people’s creative drive and helping them take the reader on a journey. I’m incredibly proud of Five out of Ten, and will never stop talking about it.

But concerning my creative output, it stayed true. See for yourself and go scroll through the articles on SplitScreen and you will see the vacant years. I only started again a year ago with the mantra of “if the spark is there, follow it” i.e. write only when I want to write, and not because I feel obliged. I’ve been 80% successful. I’ve written more this year than previously. Some pieces are shameless, low-effort posts, other full-formed articles I’m quite proud of. I even ticked off a bucket list item and made a video game from scratch.

And yet as the year of 2019 closes in, I find myself back in that familiar predicament of 2013: I’m at risk of stopping the fun.

Recently, I’ve started making videos. Years ago, Alan kindly described me as a “multimedia Renaissance man”, and let me tell you this: video editing is easily the worst of the multimedia. From my perspective, the ratio of “effort in” to “value out” is bonkers. Video-production requires a gargantuan investment of effort just to create something that looks passable. It can take hours to capture the raw footage, then multiples of that to edit it together, and all the while you need to balance the visual imagery with whatever message or story you’re trying to convey. Then you have to let your beast of a computer render the god damn thing which stops you making anything else for hours and then upload it online only to have YouTube strike your creation down because of some copyright algorithm.

Outside of the podcast, the magazine, I tend to make things on my own, often emerging every now and then from my cave with my newly completed hermit creation. Compared to any other medium I’ve played with – be it traditional illustrations or painting, making live radio or editing podcasts, recording radio plays or classical musicians, or writing personal songs or playing at weddings, editing traditional print newspapers or making digital magazines, and of course, metricating cheese – making videos is just a pain from beginning to end.

So why the hell have I started doing it? Oh yeah, I bought a copy of Alone in the Dark and thought it’d be fun to do a Let’s Play. I’ve done them before, but my expectations have changed. I recorded the first two episodes with no edits other than trimming the ends of the footage. But in Episode 3, I created the SplitBot4000 (spoiler: it’s not a robot, it’s me) and spent a further five hours editing in visual clips of every reference I made. I even made a mini-music video halfway through the episode. It was overkill, especially when I started the playthrough for me a maybe a handful of friends to see this legendarily good/bad game.

Then I did it all again in Episode 4 but managed to bring the editing time down to three hours. Should I keep going for the remaining four episodes? I don’t know. It will take four-to-five hours to play the game and conservatively 15 hours more to do the SplitBot4000 editing. And that indecision, that creative quandary, has kept me from actually playing the bloody game.

After 2013, it took me a good while to get back into playing games regularly, or as regularly as someone in their 30s can manage. Recently, thoughts have crept into my free time saying unhelpful things like, “Oh, don’t play that without recording it”, or “At least play it mindfully, you could always write about it on SplitScreen“.

I’m not concerned about gaining readership or viewership, I’m comfortable making these things for me. But I feel the twinge internally nonetheless about playing for fun or playing for content. By the way, I hate that word: “Content”. It’s cold and sterile. You’ll see YouTube creators and hear podcasters talk about it, praise it, bemoan it and in some cases suffer mental breakdowns because of it. I make ‘things’ and I make ‘stuff’. Some I’d be so bold to consider ‘art’, at least to my understanding eyes.

So here I am, sitting in front of my computer on a free afternoon, another three hours until my wife returns from work. I can either play a game for fun or I can wrestle with over 90 mins of Sea of Thieves footage from a play session yesterday with my good friend, Dave, and try to edit a parody video of a pirate shanty.

I’m not joking. Here is the spreadsheet of lyrics and a screenshot of the Camtasia video editor. 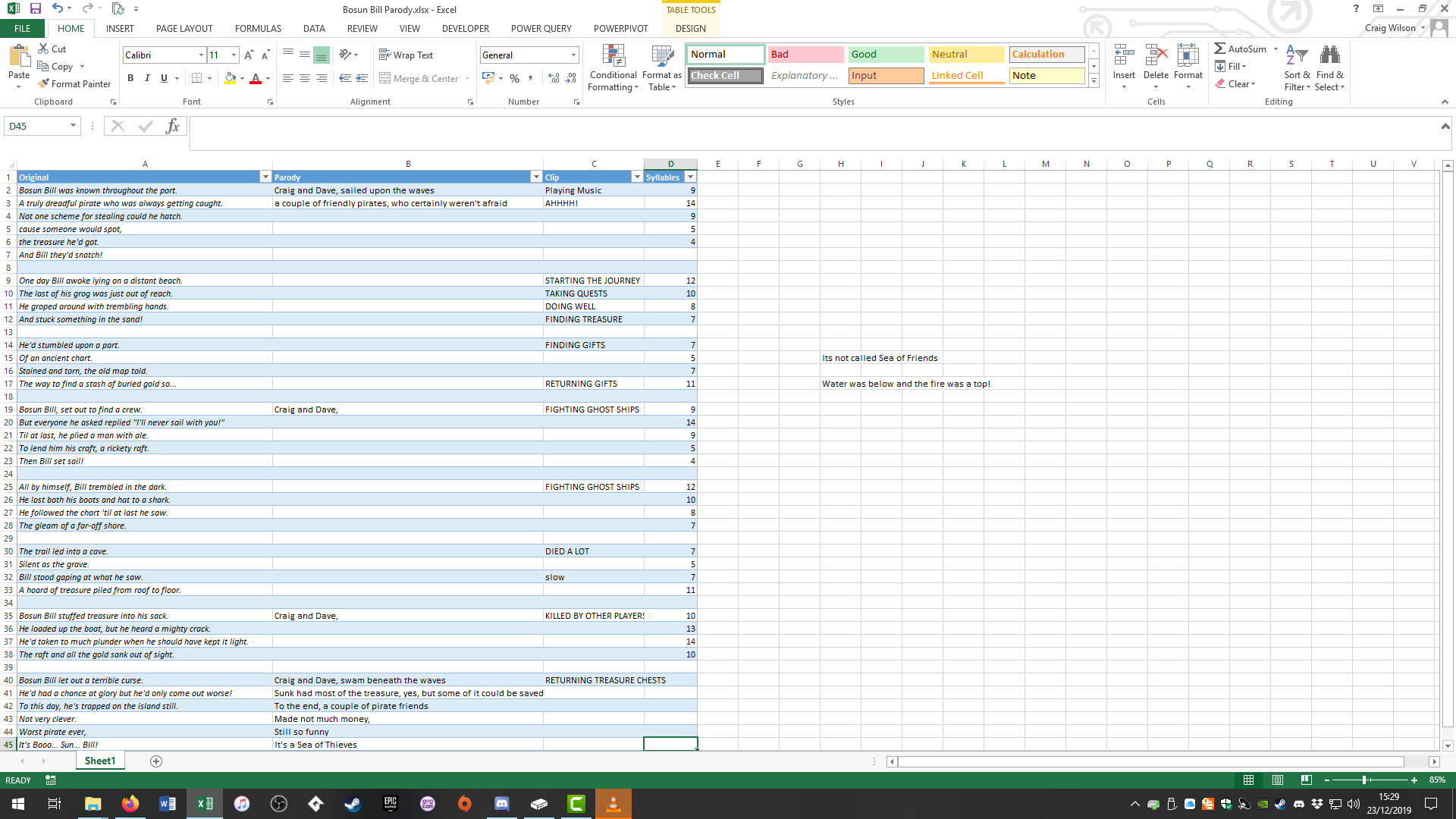 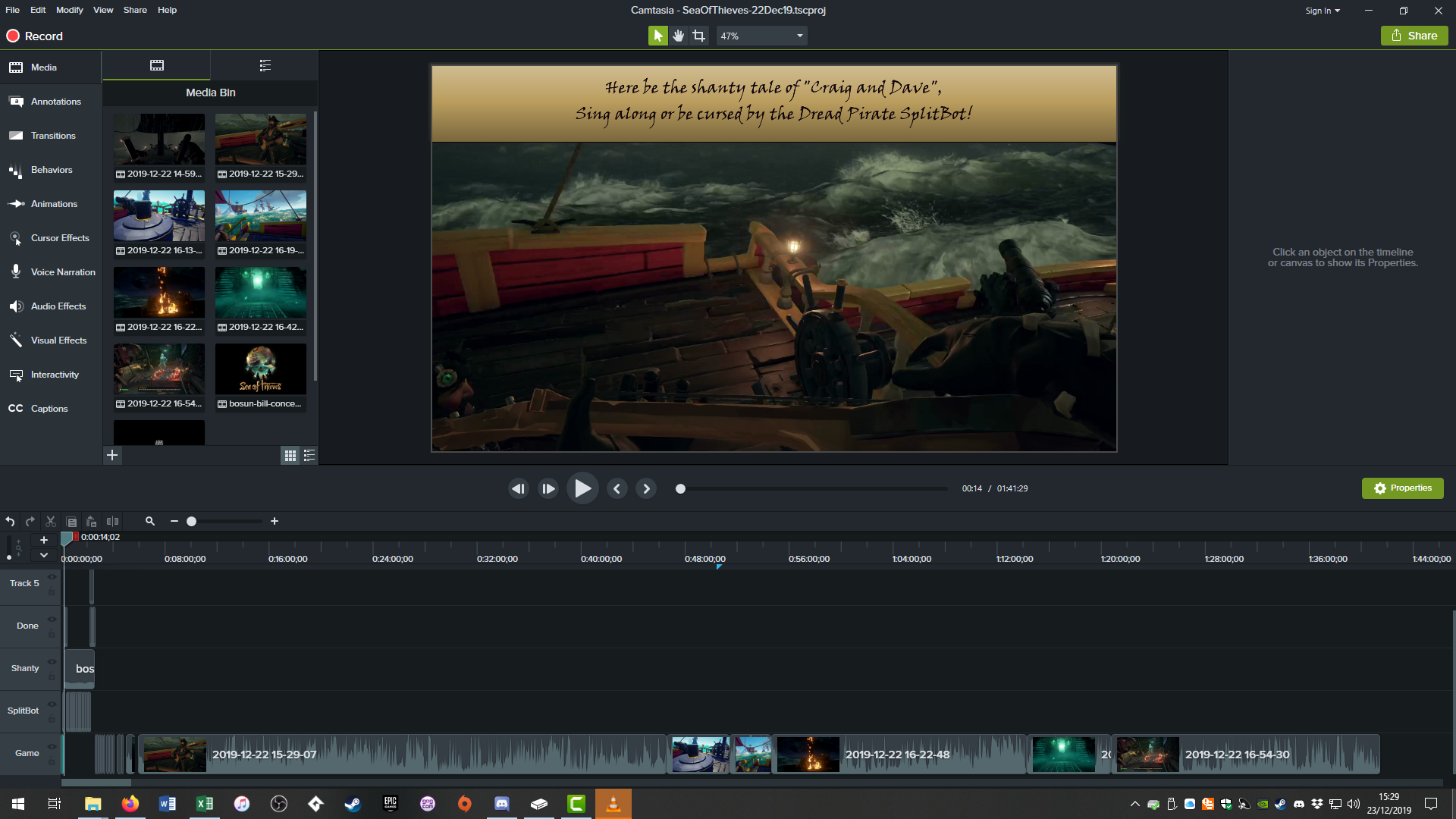 Looks a lot like the final InDesign page from ‘(And Other Mistakes I’ve Made)’, right?

This is another mistake.

After an awesome afternoon sailing the high seas, I was burning the midnight oil writing lyrics and, oh no!, I realised I didn’t have all the footage I needed. I hadn’t recorded the final battle against another player ship who sank our treasure, forcing us to swim to the bottom of the ocean and pick which chests we would save before we ran out of breath. I had fun in the day, but I have to admit I was a little annoyed at myself for not recording the escapades.

So that’s where I’m at: do I finish this video? Do I ditch it? Do I draw pictures for the missing footage? Do I go and recreate the footage solo and edit it in? None of these options is particularly fun. I thought hobbies were supposed to be fun?

I think the answer is clear: Don’t finish the video. Walk away and live to play another day.

But, I like to make things. And stuff. And what is all this, if not more raw materials? I do try to keep them small things. But I can’t tell whether this damned, internal twinge is a desire to make something creative or the feeling of obligation to create something, anything at all. Or it’s a feeling to disconnect and reset.

But do you see what I’ve done? How I keep making mistakes?

In the Large Hadron Collider, once the particle beam is up and running, they can’t just switch it off. Instead they divert the beam of energy from the main track and down a secondary lane, crashing the beam into an underground wall of concrete housing a pool of water. The energy isn’t particularly powerful with respect to non-particle physics, but the equipment is susceptible to damage if the energy is not disposed of correctly.

This article is my wall of concrete. The energy beam, my creative impulse. The equipment, me. The body of water, a cup of tea.

Writing this has disposed of the energy. The internal debate has become an article.

I made a thing.